It exists as an assimilation of iconographies: Gone With the Wind, Badlands — even more interestingly, Eyes Without a Face. 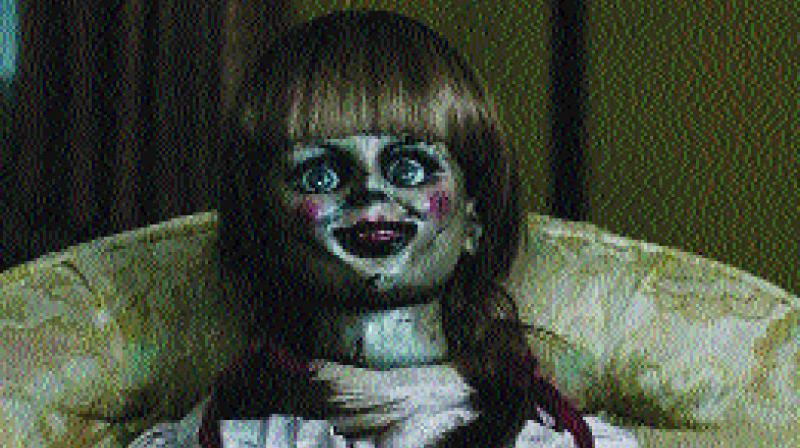 A still from 'Annabelle Creation.'
Rating:

Perhaps the single most effective moment in Annabelle: Creation occurs close to its interval (achieved through a vulgar amputation of the film by theatre owners in India). It consists of a character, strapped helplessly to a mechanised chair that will transport her, much against her will, up the staircase, where the ghost of the film stands patiently in wait. It is not a coincidence that much of the film is permeated by a similarly suspicious attitude towards automation: locks, levers, hinges, pulleys — all of these develop, over the course of the film’s duration, a sentience. This geometry of autonomy-seeking evil is expanded to the most American of all industrial symbols: the automobile. The genesis of all havoc resident in the film’s narrative lies in an unfortunate car accident, and later, a truck’s engine refuses to comply even as its passengers attempt desperately to ignite it and stage an escape. In this, the Conjuring series is not entirely unique, but it does seem to take to a logical conclusion the central crisis posited by The Exorcist, as seminal a horror film as there is — that between the arbitrary, unpredictable effects of a contemporary life steeped in science, and a binary system of reward and punishment as preordained by religion.

The perpetuation of this incredible conflict is beveled by the general era inside which the film’s chief events are contained. These start in 1943, a year located right in the middle of America’s historical participation in the Second World War — an event that more than any other exists as a symbol in the Western imagination of the nearly vulgar annexation of the possibilities of science over qualities of human morality, decency, or empathy. The young daughter of an American Gothic couple dies in a car accident — this yields a period of mourning and a blockbuster movie franchise. The bereavement causes the girl’s parents to resort to the occult — they allow their dead daughter’s soul to occupy the body of a Raganne Doll she once owned. This triggers a series of immense inconveniences: the resurrected girl proves to be a menace and is revealed eventually to be a demonic presence in disguise, etc. Twelve years later, a group of evicted orphans come to occupy the family’s house. One of them, hopelessly curious, frees the doll again to wreak genre upon the household again — terrible horror ensues.

It is rather exciting that the plot, per se, of Annabelle: Creation is rather sparse — this allows it exist, instead, as a series of simulated crescendos: disconnected, separate from each other, without concern for chronology, development or information.

The standard unit in this modular film is a sequence in which a character — usually one of the young girls — displays immense disdain towards self-preservation and ventures into one of the prohibited areas of the house. This tendency also results in a fantastic treatise on the ever-extendible blueprint of the typical American house: there is a room-within-a-room, a basement, a room under the stairs, a shaft, a well — a network of concealed portals to an unpleasant past. The general area of this secret room is shrouded in alternating layers of darkness and light — much of it is then revealed through our character’s field of vision: we see what she sees, but more importantly, we cannot what she cannot.

It exists as an assimilation of iconographies: Gone With the Wind, Badlands — even more interestingly, Eyes Without a Face. In this deference towards the classical, Annabelle: Creation is a success, but when it abandons formal control to turn instead towards a horror of brute force, relentless bloodletting and strong effect, that it begins to render itself impotent.

The writer is programmer, Lightcube