The film, directed and hardly written by Milap Milap Zaveri, has everything borrowed from the worst of Bollywood of that trashy era. 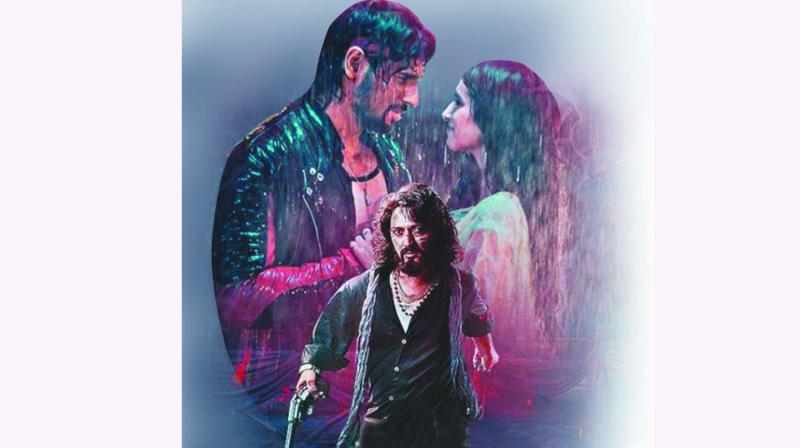 The film’s climax is dull because in Indian films people don’t like to just kill their main enemy.
Rating:

If, for some reason, you have an urgent craving for a rather tacky and soulless recap of Bollywood in the half-decent late-Seventies and its quick descent into the terrible Eighties, you could try to sit through Marjaavaan, otherwise a cretin of a film that is a complete waste of time, energy and money.

The film, directed and hardly written by Milap Milap Zaveri, has everything borrowed from the worst of Bollywood of that trashy era. It’s as if there existed a dumping ground of all used and discarded items — stories and plots, stock characters (good and bad, male and female, main and peripheral), fight sequences, costumes and accessories — and Milap Milap Zaveri simply went in and walked out with as many things as he could carry. He then came home and dumped them all on a paper and called it a screenplay.

So obviously, this illegitimate offspring of many B-grade items mating with each other is worse than C-grade. It is third-rate.

There is nothing, and I mean NOTHING, absolutely nothing original in this film. The story, no item of clothing, no character, not even a weapon, plot line, villain, hero, location… nothing. Even four of the six songs are what’s now called “reloads” of old hits.

Marjaavaan’s story is insipid and stupid. There once was a lawaris child lying in a Mumbai gutter who was rescued by a bad guy, Anna (Nassar). But Anna didn’t adopt the kid. He didn’t even give him a bedroom or a bed in his house. Instead he made him his minion. When the kid grew up, he became Anna’s chief minion, Raghu (Sidharth Malhotra).

So while Anna ran his dhanda of water tankers and conducted the annual sale-purchase of girls, Raghu, his son-like minion, did his bidding, which included killing off all pesky rivals.

Meanwhile, in a bedroom in Anna’s bizarre apartment skulked his own son, Vishnu (Riteish Deshmukh). Nurturing complexes about many things, including the fact that he was a midget and that his father loved Raghu more, Vishnu grew up to be seriously stupid and sulky.

Marjaavaan is set in Mumbai and the location is split between two places — the strange apartment of Anna, which is on some very high floor of a building that’s under construction and doesn’t have a lift, but his house is nicely done up except for the balcony wall. There is no balcony, and there is no wall. It’s just an open season to toss out men who irritate.

The basti is where Raghu lives, with three besties who behave like his orderlies, and Arzoo (Rakul Preet Singh), the dance bar girl who dotes on him.

Despite this, Raghu doesn’t think twice before dumping her for the samaj sevika from Kashmir, Zoya (Tara Sutaria).

Zoya is speech impaired and yet she proceeds to ask long-winding pahelis in sign language. Thankfully, she has a curly-haired human translator always in tow. She also has a purpose — she wants to exchange all guns in all bloody hands with harmonicas. She hands one to Raghu.

Zoya, like most nubile newcomers paired with established male actors in desi action thrillers, is a prop, an impetus. First she must make the hero, who is on the wrong path, to think of living a lovey-dovey life with her and thus, must, piss off his boss.

Having done that, she must die. Because only then will the climax have some raison d’etre.

There is also a cop in the scheme of things. We could call ACP Ravi Yadav (Ravi Kisen) The Empathetic Gyani. He gives gyaan to all and doesn’t impede upon any proceedings involving sharp objects, firearms and dead bodies.

In fact, so bored is he of Marjaavaan that I think he and his entire thana went on Keto diet and lost several kilos.

If you borrow things from not one but multiple sources, and have not a single original thing or thought, is it called plagiarism or dacoity? Just asking.

Though his bandana is very Jaggu Dada (Jackie Shroff, Hero), the red sando vest (Amar Akbar Anthony), the matchstick he sucks on (a la Vijay’s beedi in Deewaar) are Big B’s. At some point one of his three friends turns into Abdul (Mazhar Khan’s one and only memorable character in Ramesh Sippy’s Shaan).

Vishnu, the evil midget who talks big and is always waving about a pistol with a long nozzle, is without menace or meaning.

A big pheku, he is very crying about his daddy not loving him and talks only in long monologues in which he likes to expound upon “What is the height of… Kamingi, deewangi…”

I wish he had also asked: What is the height of stupidity? The five people in the hall would have screamed in unison, “You, your character, your acting, your dialogue...”

Though Matrjaanvaan is an action film, its fight sequences are bad and bizarre.

In the first one, Raghu’s minion arrives with a First Aid because woh “marta bhi hai, aur jodta bhi hai”.

So pain relief is sprayed before he kicks a goon, crepe bandage is wrapped around another’s neck before he twists it so that he can inspect his behind.

The film’s climax is dull because in Indian films people don’t like to just kill their main enemy. They like to sit down for some baat-cheet, unload mann ki baat and generally talk about life and stuff going on around us. It just goes on and on, much like the film’s dialogue.

My guess is that the bhoot of Kader Khan was hovering around the writer and kept administering invisible slaps until each and every dialogue was made verbose and baffling and the hero and villain always spoke in rhyme.