The film kicks comedy and exhilaration into high gear, treating the fantasy of robbing a bank like an elaborate mission. 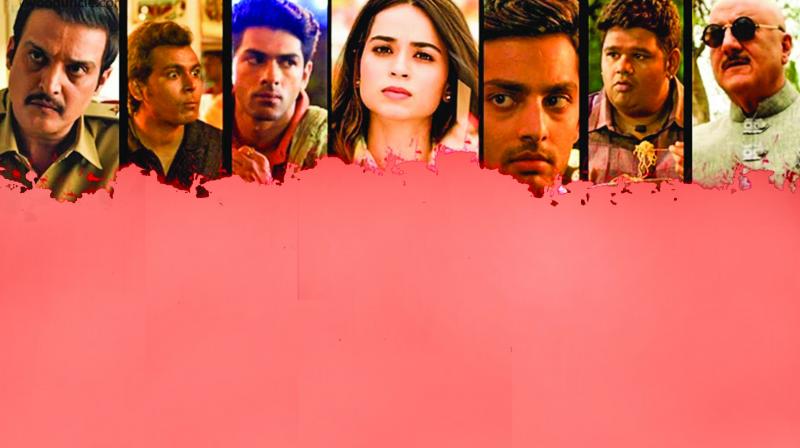 One has seen teens’ display of verve and wit in many tales embracing the over-amped emotions of sorrow, excitement and fear. Needless to add, not all of them have been stupendously successful films, unless done cleverly, the results can be mere parodies of a box office hit underlining a similar theme.

This week’s film Ranchi Diaries takes a bit of its storyline from a number of Bollywood masala entertainers (and may be, Hollywood films, too) and fails miserably while trying to give us a semblance of a taut comic thriller.

In the forefront is a bunch of young enterprising group: an aspiring model and her friends, an amateurish gang of thugs, a self-styled corrupt politician Thakur Pratap Singh (Anupam Kher) and his honest police officer nephew, who try to make it big in the small town of Ranchi.

While all of them Manish Pandey (Himansh Kohli), an aspiring wannabe singer Gudiya Sharma (Soundarya Sharma) and others have dreams, none of them seems to be setting a target for themselves, save, perhaps, take the crime route to earn quick bucks. And so, Manish who makes extra bucks utilising his expertise at breaking safes, has major plans of running away with Gudiya to Mumbai soon. Thakur secretly loves Gudiya, and spends his private moments watching her dance performances on videos. The two young lovers almost end up realising their dreams but for Manish’s greed to make one last attempt at making his fortune. And that backfires, when Thakur’s goondas get to know about their plan and kidnap Manish.

The film begins in stoic and a lot of serious announcements by police officer (Jimmy Shergill) outside a dilapidated building where supposedly a bunch of “terrorists”, or as per one onlooker, “an alien” hiding inside the bank housed in the building, pose a threat to the people around. A voiceover (Vijay Raaz) begins to tell us about the various characters involved, and takes us to their background and back-stories.

With this tantalizing setup, Ranchi Diaries dives back to Manish’s love life, leading us to the pivotal day when they decided to elope and try their luck in Mumbai. The film would have been on a certain believable path then. But, instead of just delicately dropping these teenyboppers’ innocent reveries, the film kicks comedy and exhilaration into high gear, treating the fantasy of robbing a bank like an elaborate mission.

But only the genius could write brilliant lines to raise laughs and blend high drama to come up with a plausible script. With bits of thrills and acute observational humour thrown in, the film, at best, looks like a school play performed with gusto by eager enthusiasts all out to prove their acting potential. They are joined in by some great talent too: Shergill as Lallan Singh, the cop; Satish Kaushik as Chaube, the sub-inspector; and Pitobash as a Naxal leader who is on the dole.

With a mishmash of genres and a weak screenplay, if director Sattwik Mohanty expected genuine, full-throated cheers bursting forth throughout the theatre, he is obviously mistaken. Even producer Anupam Kher, who has a stellar role as one of the key characters, looks completely ill-at-ease while trying to make head or tail of his badly written role. To think that this film was actually conceived as a tribute to Hollywood’s Ocean’s Eleven is not just cheeky on the part of the filmmakers, but enough to make the audience go wild. There is supporting cast of newcomers who look too desperate to please, not realising that a crime caper of this kind requires planning, care and seamless execution. The climaxing sequence of the film is so slapdash as to resemble an experimental student film trying to make some academic point about context and establishing shots.