The screenplay of the film takes a backseat and makes the film hardly watchable. 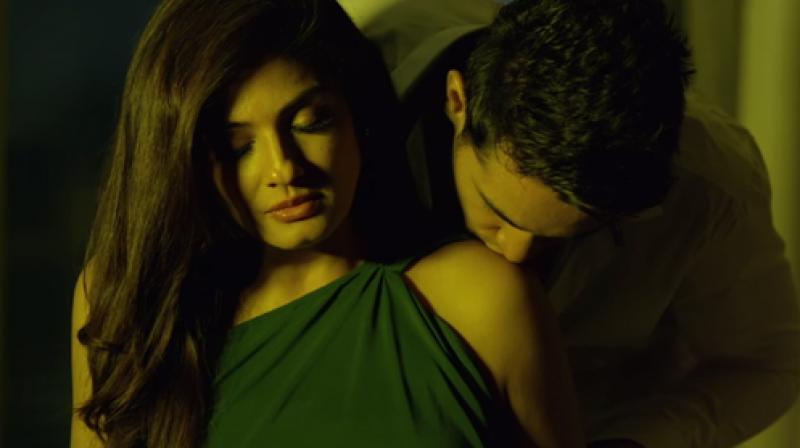 A still from 'Shab.'
Rating:

When a film is directed by Onir, some controversial characters are surely an integral part of his story. His latest offering Shab deals with such dark and complex characters based out of the hustle bustle in Delhi.

An aspiring model from a small town Dhanaulti, Mohan aka Afzar (Ashish Bisht) comes to Delhi for an audition. He meets Sonal Modi (Raveena Tandon), a rich and brash wife of a renowned industrialist Vivek Modi (Sanjay Suri) who initially rejects Mohan on the ramp but later uses him sexually by offering him money. He accepts her in every possible way.

Mohan incidentally meets Raina (Arpita Chatterjee) who likes her French neighbour Benoit (Simon Franey) secretly and falls for her, but destiny has its own game. Benoit gradually falls for Raina, but it is too late. Neil (Areesz Gaanji), a close friend of Raina, is dealing with his recent heartbreak.

The good part of the film is its characters which are relatable. Director Onir makes sure that he sketches them close to reality. Known for making complex and violent stories on same-sex relationships, Shab also has such characters, but this time they all are emotionally disconnected. Like his previous films like I Am, My Brother Nikhil and Bas Ek Pal, Onir couldn't create the same magic with Shab. The screenplay of the film takes a backseat and makes the film hardly watchable. Onir has a brilliant take on homosexuality and he beautifully weaves it into his films each time, but it all goes haywire in this one. The most worthless thing in the film is its cheesy dialogues.

The scenes in the film are abruptly inserted. The scene when Mohan tries to give away his gaudy looking shirt is irrelevant. Sonal uses Mohan for her sexual desires, but her jealousy or maybe dictatorship towards him after he falls for Raina is inapplicable, that too when she is physically involved with another toy boy at the same time.

Towards the climax, when a close fashion designer friend reveals about Sonal's alleged relationship with Mohan to her husband Vivek, his hatred towards her is injustified since he too has had an extra-marital affair. In an interview with DC, Onir revealed that his friends around him inspired him to make this film. Perhaps, he witnessed the complexity of the characters around him that he penned.

Shab is a bit of A Life In A Metro, Fashion and Ae Dil Hai Mushkil, but at the same time, Onir can't be blamed for writing this film seventeen years back. With the runtime of 108 minutes, the first half goes off slightly well, but the film loses its grip post interval, only to again pick the pace up towards the anti-climactic conclusion.

Oozing butts, chiselled body and a chocolaty face, debutante Ashish Bisht has it all to woo you, but his act isn't much appealing. Though he gets enough on-screen time to show his performance, he falls flat. Raveena is good enough in this boring film but in bits and pieces. In fact, both Raveena and Ashish look funny while they emotionally break down. Arpita Chatterjee and Sanjay Suri are good, but Simon Franey just melts your heart with his cute smile and adorable French dialogues. However, since Ashish is the male protagonist, you might want to see more of him. Areesz Ganddi plays a gay role wisely.

An avoidable and disappointing affair, especially if you hold an expectation of a typical Onir film.