The premise of debutant director Chandru is good and it had all the potential to make it a racy crime thriller. 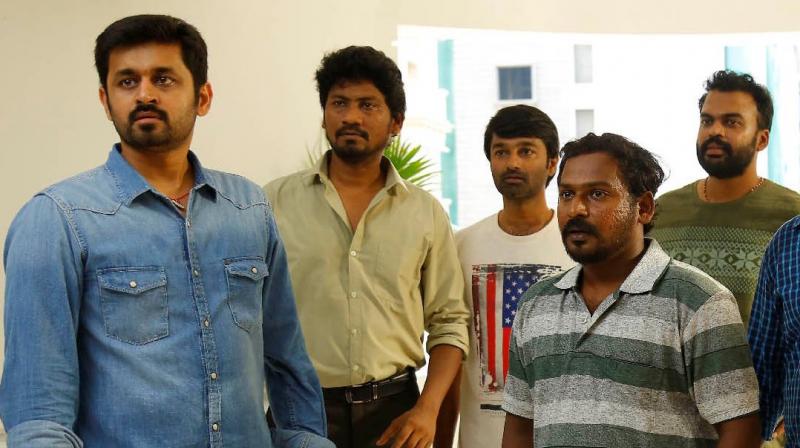 Bodhai Yeri Budhi Maari begins with a brutal murder of a girl (Meera Mithun in a blink-n-miss role) by her ex beau who is under the influence of a potent drug.

Shift to the next scene, we see a bunch of drug addicts at a rehabilitation center where they share their experiences. In walks Karthik (debutant Dr. Dheeraj), and being the hero of the film, he gets a mass slo-mo entry with a bang on music. He narrates to the inmates as to how his life turned upside down after the consumption of a heady drug.

Karthik, a teetotaler leads a happy life with his parents and he is to tie the knot the next day with his childhood sweetheart (Dhusshara). All seems hunky dory until he gets a call from his buddy who says that one of his close friends is no more. When Karthik rushes to Roshan’s apartment, he realizes that it was a plan to bring him there to celebrate his bachelor’s party. However, Karthik ends up snorting a powerful drug accidentally, which produces violent hallucinations.

Then there’s a journalist Brindha (Pradhayini) in the adjacent flat who is trying to bust the drug mafia. Soon, she comes to know that her living-in partner (Ajay) – a corrupt cop – is behind this drug peddling.

Dheeraj manages to pulls it off, though a stoner film like this demands a stronger performer. The much-hyped supermodel Pradhayini’s debut did not create any impact. Dusshara is promising. Ajay as the ruthless cop fits perfectly. The bunch of supporting actors who play as Dheeraj’s friends overacts. The premise of debutant director Chandru is good and it had all the potential to make it a racy crime thriller. But it is in the execution with an incoherent screenplay where he errs. Technically, Balasubramaniem’s cinematography is functional and KP’s music is a bit loud.