The Sky Is Pink movie review: The cloying trappings of tragedy and guilt

Now imagine being told that the film, about a very young person's tragic death, is based on a true story. 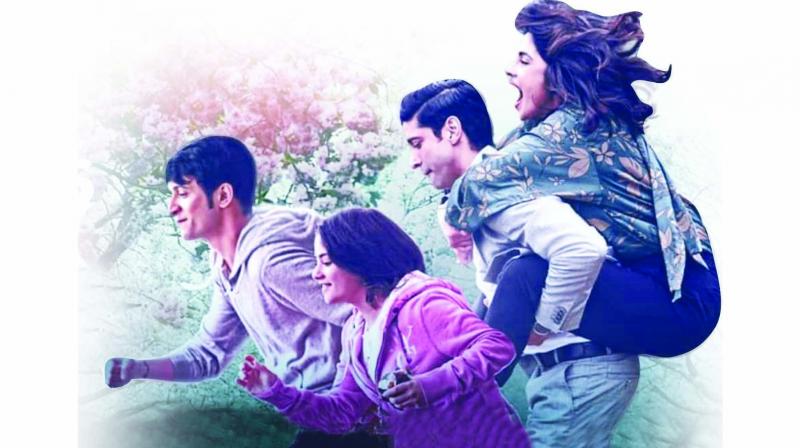 The film, written by Bose, along with Juhi Chaturvedi and Nilesh Maniyar, tells a powerful, highly emotional real-life story quite badly.
Rating:

Ever watched a film whose story is so tragic, the grief so heavy that you feel downright mean saying anything bad about it?

Now imagine being told that the film, about a very young person's tragic death, is based on a true story.

That’s a serious, deliberate guilt trap, because if it’s mean to call a reel tragedy “mediocre”, it’s downright wrong to call a real tragedy cloying and tiresome. Even thinking it feels like a comment on the tragedy and not the film, and someone may well turn around and say, “A person died, and you are still not satisfied?”

Writer-director Shonali Bose’s The Sky Is Pink made me feel like that. But, only for a bit.

The film, written by Bose, along with Juhi Chaturvedi and Nilesh Maniyar, tells a powerful, highly emotional real-life story quite badly.

I watched the film first at the Toronto International Film Festival last month — it was what’s called the “festival cut” meant for foreign audience. What we have in our theatres is a desi version with some scenes deleted, some new ones added. But the film’s intent and impact are the same — Bose tells a sad story without much cinematic skill, but with a lot of emotional blackmail.

The Sky Is Pink opens with a voiceover that stays throughout the film. The camera descends to a farm house in Delhi and then goes inside to where Niren (Farhan Akhtar) and Aditi Chaudhury (Priyanka Chopra) are sleeping. As we watch them lying away from each other, their pillows cradling their heads, heavy with thoughts, a child’s cheery voiceover begins talking to us about their sex lives, rather the lack of it.

The voiceover is that of Aisha (Zaira Wasim), Niren and Aditi’s daughter. Aisha introduces us to her three family members before introducing herself.

There’s her elder brother Ishaan (Rohit Suresh Saraf) whom she calls Giraffe. Papa is Panda, and mother is Moose. Everyone calls her Aisha, at times Aishu.

Let’s stick with these cutesy names because Aisha suffers from a life-threatening immunity disorder. SCID. “Google it,” she says.

I did. Aap bhi karo.

The Sky Is Pink is set in four locations, each one telling the story of four different times in the lives of the Chaudhurys.

There’s the aforementioned farmhouse in Delhi. Several years before that there was a lovely haveli in Chandni Chowk, then a flat in London and the Great Osmond Street Hospital nearby.

The story of The Sky Is Pink is split into two — Chaudhurys’ life before the tragedy, and thereafter.

The film follows the Chaudharys from Aisha’s birth, shows us how they struggle to cope with her diagnosis and treatment, moving from India to London, scrounging around for money for operations, Moose and Panda separated, from each other, and each parent from one child.

We see the young mother, Moose, spraying everything with disinfectant, Panda going on radio to ask Londoners to pitch in to help save Aisha.

In these initial parts the film’s emotional quotient is high as it makes us stand with both — with Aisha who, in her twinkling voice, is talking of dying while making light of it, as well as the quietly sad but determined Panda who is doing his best to save his daughter, and dogged Moose who will stop at nothing to ensure no harm comes to her child.

In between this tale of medico-procedural involving doctors, hospitals, diagnosis, tests, transplant we get a glimpse of what life was like for Niren and Aditi before they had Aisha.

So there’s a very filmy romance that lets the film air its stars in some sunshine.

Though this is a break from the heaviness of a family trying to save its young one, it feels like a needless indulgence the stars may have demanded. It is also terribly boring.

After interval the film is dull because it’s just a string of domestic scenes followed by urgent medical emergencies.

Throughout all this, the film shows no crimps anywhere in the lives or personalities of the Chaudhurys.

There’s no frustration, no laments, just determination and love.

Everyone is always together and focused and fabulous, like all model family members ought to be.

Everyone is always nicely dressed and helpful, everything is always pretty and manageable because everyone is always doing the right thing and overflowing with love. Only sometimes they act cutely silly and parental.

Even when the film shows Aisha’s frustration at life’s usual disappointments, The Sky Is Pink signs off with a pretty, Instagram-ready vacation.

This goodness overdose, and the lack of any complexity, reality, mistakes, missteps doesn’t just make the real lives of Chaudhurys feel plastic and fake, but also makes for dready, cloying cinema.

Shonali Bose, despite having access to a very powerful story, has made very strange choices - not just of how to tell the story, but also of what to show, and what to keep out. It seems her intent was to make a film that could well be titled, The Chaudhurys: Forever Amazing.

We must feel sad for and empowered by the Chaudhurys, but not through the power of the film’s writing or Bose’s direction, just the facts of their life.

The same has to be said of Shonali Bose whose Margarita With A Straw was similarly inclined, and only slightly better.

The Sky Is Pink  doesn’t just grab our heart strings and plucks at them gently. It smiles at us while grabbing them with both hands and then pulls them hard. So hard that one point it has to show us a father cradling a small body bag.

Of course, scenes like this have an emotional impact. And there are, in fact, some powerful scenes in the film, and most of them involve Farhan Akhtar.

And if Bose can be complimented for anything, it has to be for how her film’s heart throbs because of Farhan Akhtar’s Niren and his unconditional love for and submission to Aditi.

She focuses a lot on Niren’s often unarticulated grief, and his resolve to embrace and support every decision of Aditi. His love for her is affecting, as is their bond.

But Bose’s choice of using voiceover throughout is the film’s big covert act that tries to but can’t really conceal bad writing and lazy filmmaking.

Aditi is a precocious kid and her voiceover is always adorable. But not for a second does it let us forget that death is hovering and there is grief all around — to goads us to cry, but also laugh at how cool it all is. We are its emotional prisoners and must submit to its command.

This ploy, of a child’s courage to look death in the eyes and talk to us about it, has some power and function at the beginning. But when it goes on and on, it starts to grate.

I felt impaled by the film’s relentless emotional badgering, constant telling us, and not showing, how terribly tragic it all is.

Priyanka Chopra the star is sparkly, the actress adequate. Sometimes she outdoes herself and sizzles, like in Bajirao Mastani.

But here, as a mother caring for a child while constantly living with the fear of losing her, she is mostly adequate and overacts only sometimes.

Rohit Suresh Saraf is good, while Zaira Wasim is sweet and adequate.

Together they have created a motivational video of a happy family that is bearable, but not believable.