Daddy movie review: A fattu don in a fattu fillum

Arjun Rampal, it seems, had a creative itch to play a real-life don who is still living — an exiting and daunting task for the best of thespians. 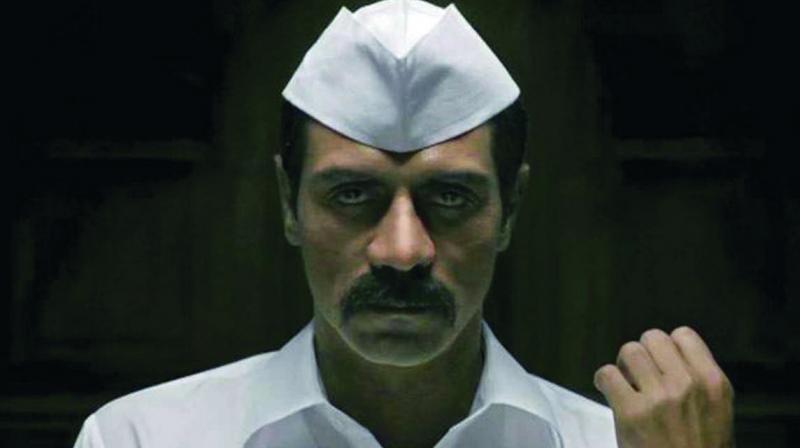 Arjun Rampal in a still from 'Daddy'.
Rating:

Daddy is a mildly successful but very good-looking star’s needless ego trip. Arjun Rampal, it seems, had a creative itch to play a real-life don who is still living — an exiting and daunting task for the best of thespians.

And he has now scratched it. Problem is that Mr Rampal is neither a bad actor nor a terrible one. He is simply a non-actor. Just like, let’s say, I am a non-trapeze artist.

I mean, give me a horizontal bar dangling by firm ropes, a safety net down below and yet, no matter how many times someone swings the bar at me and screams “come on, come on,” I’ll stay frozen.

In case a lot is at stake, like, say, my izzat, some money, an honourable mention in the Khatron Ke Phisaddi annual album, I might chant “Jai Bajrangbali” and jump to grab it. But, at best, I’ll graze the bar before dropping down hard into the net, screaming.

If they still insist, I’ll take the horizontal bar home and cut it into two pieces.

Swing from it I won’t, because I can’t.

Just like that, Mr Rampal is can’t act. Give him a script, dialogue, getup, a camera gazing expectantly and a director telling him what to do, yet all that his gorgeous face can come up with is the look of being stunned at its own shocking inability to conjure any expression.

His face will hold that for a bit, but eventually it’ll grimace and be in mild depression.

Though the prosthetics people gave Mr Rampal the Gawli nose and made his beatific face rugged and less dashing, “playing a living don” for the non-actor amounts to posing for about two-three stills with two-three gestures.

Which is not a bad idea given that the film itself is incredibly inept.

That, sadly, is surprising because Daddy is directed by Ashim Ahluwalia who made his debut with the absolutely stunning Miss Lovely (2012).

His Daddy tries to tell the story of the rise of a Maratha don against a Muslim don, but it can’t do so with any measure of coherence or drama.

We get mood, lots of it, of the 1980s and 1990s, fun-seedy settings, fabulous camerawork and cool music. But the screenplay, dialogue, acting and storytelling are so incompetent and feeble that all it adds up to is a fattu don in a fattu fillum.

Daddy, written by Rampal and Ahluwalia, tells the story of Arun Gulab Gawli (Arjun Rampal), the don of Dagri Chawl in Chinchpokli, Mumbai. And the story it chooses,

and perhaps has the don’s sanction to tell, is of an awkward, reluctant don who rose step by step — from hafta vasooli and chori-chakari to satta and smuggling; from targeted carrying out/ordering many murders and becoming the last don standing in Mumbai, to a politician — by accident, of fate and circumstance.

Woven into this story is an interesting motif — that Gawli was someone who was happy posing as a benevolent dada while his real interests lay in spending time with his family and smoking ganja. Basically because he really was a fattu, unable to shoot even when urgently required.

This story comes to us via several narrations: A character appears and their voiceover begins, and then it’s handed over to another and another…

I imagine that the idea behind this relay commentary was to offer different perspectives on the goonda-turned-godfather, with each narrator adding a crucial piece to create a 4D character with different sides and viewpoints.

Unfortunately, it’s a clever device that’s been squeezed dry of all its creative, naughty potential. It’s as if prepared, chronological text on the life of a don is read by one, and then passed on to another and another...

The narrators themselves remain elusive. All that’s revealed is their very basic identity — mother of the don, moll of a Pathan don who turned at the behest of another, cop who pursued the don, Muslim neighbour who fell in love and married don. Neither their dialogue nor the ensuing action tells us anything about them, and not much about the don himself.

What we do get a lot of are moments when Arun had decided to quit, was going to quit, had planned to quit, but then, that day… Daddy often feels like a apologist’s hagiography.

The story then is simply this: Arun tags along his friends Babu and Rama, completing the troika called BRA. They commit some murders, rise to have a meeting with Bhai Maqsood, aka he-whose-name-is-not-taken-in-the-entirety-of-the-film.

While Babu and Rama are humbled in his presence, Arun scowls because he considers Dagri Chawl his illaka and doesn’t want outsiders.

Rivalries, ambitions result in his friends get tapkaoed and Arun simply finding himself at the helm of affairs. When the rivalry with Maqsood Bhai gets serious, the help of some random Joshi baba is taken who, while running the biggest bhains shelter I have ever seen, harbours ace killers.

Maqsood Bhai’s film financier, arms dealer, hawala agent et cetera now get tapkaoed and the limping cop (Nishikant Kamat), who nurses a grudge against Arun, seems to be getting closer.

Meanwhile, Arun has married Zubaida (Aishwarya Rajesh), had kids, taken to philanthropy and is now called, lovingly, by one and all — Daddy. Soon he forms the Akhil Bharatiya Sena, sweeps the elections and is catapulted to the Vidhan Sabha where he arrives in a Gandhi topi.

But then the past catches up with him. There was something very interesting going on Daddy — showing a don in the making who is at least twice called “fattu” because he doesn’t take a clear shot and, when another does but doesn’t get paid, he doesn’t squeak.

A whimpy, darpok, mingy don. How nice. But Rampal doesn’t have it in him to articulate this complexity on his face or convey it with his body. And the film hints at it but doesn’t pursue it.

As exciting as Rampal’s look is initially, like the film, it gets less and less so.
Dates and year appear on the screen repeatedly, flagging up milestones in the don’s career. But the proceedings don’t have the energy to make it a memorable day.
The two standout moments in the film are a shootout when a background score comes on that is till date the best homage to R.D. Burman. And a superb club dance song which is all Bappi da with the girl and the boy, in glittering gold, channelling Mithun Da and Kalpana Iyer.

The nonsensical, daffy lyrics with infusion of English words brought the film alive for a bit. Ahluwalia is clearly a director with a keen eye for the bizarre, quaint. He scans and then locks to memory regular spaces with a dash of the bizarre. A table in a thana has a dinner thali lying on it untouched. There’s graffiti and posters on walls, forgotten, decaying tent stuff lying in Dagdi’s lanes… all these bring alive spaces, making them ache for drama and action. What he then proceeds to do in these settings is hugely disappointing One reason for that is the screenplay which offers very little. Which is no surprise given Rampal has co-written it. I imagine that most scenes began and ended with “and the camera pans to Arun’s face, whose jaws are clenched, brows knitted and eyes vacant”. It is dry and dull and made up of the most cursory research and bland characters.  The Wikipedia page on Gawli has more excitement and heft.

If we didn’t know the story already, no mai ka lal or mai ki ladli would have figured that one big star is trying to play Dawood here. I mean, I have seen extras in court scenes who are more memorable. This Dawood is a compost of dark glasses and creepy shirts. Never has India’s Most Wanted  been more bafflingly nondescript and decrepit. Together, Arjun Rampal and his star pal create a bore fest playing Hindu don to Muslim don. They are a deadly two-member band of non-lethal actors.