For a film which calls itself Chef, there’s very little here to salivate over. 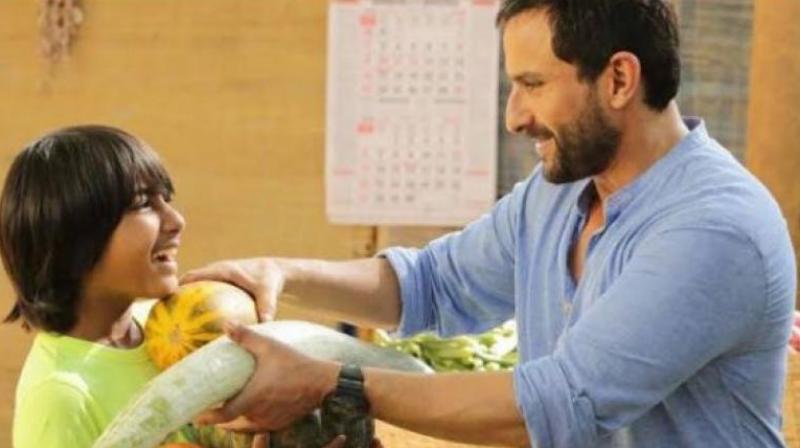 Svar Kamble and Saif Ali Khan in a still from 'Chef.'
Rating:

Though I don’t and never will understand why good directors and big production houses spend their time, energy and money in regurgitating old films, actor-director Jon Favreau’s 2014 movie, Chef, is a pretty decent fit for the Indian context.

I mean, give desis an estranged papa-beta, kindle some pyaar while frying pyaaz and you are home safe.

Director Raja Krishna Menon’s Chef goes in for this full-on, giving us not one but two papa-betas, and then serving us familial love and warmth in mithai dabbas, on plates of hot, steaming food with that often-ignored side dish, chutney. These woozy moments are moving, but they are exploitatively so.

Menon goes in for advertisement-like affected short-cuts to evoke quick bursts of emotional release that move you, make you shed a tear, but leave you with nothing afterwards.

In this, as well as in casting, his Chef is smart and surefooted. He even throws in some fun asides to keep us entertained. But in telling us a story that’s coherent all through while treating us to a desi gastronomical experience that’ll make our stomachs rumble, it shortchanges.

Chef makes do with blurry bits, dots that don’t quite connect, and pretends that just because it has told us that its lead character is a star cook, we will believe.

For a film which calls itself Chef, there’s very little here to salivate over.

Chef’s story really began with a father in Chandni Chowk who spent his hard-earned money on his son’s English-medium education while nurturing that hyphenated dream which stalks too many kids in our Bharat desh — of presenting the world with a doctor-engineer.

But Roshan Kalra, naak ke haathon majboor, keeps running off, despite his daddy’s disapproval and daant, to eat and learn how to make chole-bhature. The conflict eventually drives him out of the house and into dhabas where he sleeps on floors and learns to cook, moving eventually to America, where we actually meet him.

RoshanK (Saif Ali Khan), now middle aged, is chef de cuisine at Galli Kitchen in New York. Well-known and smug, he can’t take criticism of his food and an interaction with a crabby customer throws him in the lockup and, soon, out of the job.

There’s some vague insinuation about an affair with one of the cooks in his kitchen, Vinni (Neha Saxena), but the film seems uncomfortable with this because it has a happy ending planned in which this would jar.

Roshan, you see, has an ex-wife, kathak dancer Radha (Padmapriya Janakiraman), who lives with their son Armaan (Svar Kamble). Roshan’s relationship with his son is formal, distant, on Skype.

Through several comments and chatter we get that Roshan’s cooking, once dazzling, now lacks the palate-pleasing surprise it once had. It has become boring, staid, passable.

Since we don’t get any tangible evidence of Roshan’s cooking skills, we readily believe this.

In fact, the silly pasta that he makes — twice in the course of the film — would make Italians balk, and the only bona fide fact we know is that he loves chole-bhature, more to eat and admire than to cook.

Irritated, scared, without a job and at his wit’s end, Roshan is, according to Vinni, too caught up in boring, upper middle class traps to do what he really should — get out and bring some tadka back onto his plates. So, on her goading, he takes a chance and decides to attend his son’s dance performance. This is when the movie, which is less about a chef and his cooking and more about sons and daddies, really begins.

Armaan’s group dance show is not dazzling, but what follows is a moment that’s both filmy and fabulous. The divorced couple gives a dance performance which bounces off the chemistry they once shared.

But the happy, peppy song doesn’t linger long. Armaan’s comparisons between Roshan and his Amma’s mystery friend put an end to any chitrahaar Roshan may have been planning.

And then both Roshan and we meet Biji.

It’s a moment — one that makes you laugh go: LOLZ. How clever! Which mai ka laal can beat that?

Biji, in a mundu, is a dude to die for. Plus, there’s a haathi at the entrance to his fabulous house and vintage cars under a shed.

He may well be called Mr Fait Accompli and send Roshan packing back to America.

With their help, and Armaan’s, the Punjabi papa who can’t stand that his son gets excited about idiyappam but asks “What is chole-bhature?", gets his mobile Raasta Café ready for the road. And as they do so, we get cute, ghee-soaked moments where Roshan and Armaan learn to be father and son. These small bits pulse in this otherwise decent but not exciting film.

If, like me, you are a lallu who draws life’s lessons from even middling commercial movies, this one offers a few.

First, a spanner in our works. And then, when the ever resilient creatures that we are, grid our loins and chart a new course, and just as we are beginning to take flight and enjoy it, there drops from asmaan two choices — one that’ll take us back to the old, comfortable life, and one that’s bat shit crazy.

Chef goads us to embrace that crazy option while humming, kuch din hi sahi, kuch din toh jiyo yaar. I like that.

There’s a certain kind of confidence and maturity that’s apparent and pleasing in Chef — it sticks to its languid pace, avoids being flashy, and doesn’t feel the need to contrive a definitive end.

It also gives us interesting asides with some funny dialogue — including a flavour of Kerala’s labour union — and it shows, in flashback, how a marriage, a relationship curdles slowly.

It’s moments like these, and Roshan passing snide remarks at Radha about Biji, which are real and make this slow, slightly drab movie fun.

My single biggest grouse is that there’s so little food. Saif Ali Khan’s chef remains a one-dish guy, doling out some some strage stuffed paratha from his truck.

Saif gets to show us a range of emotions here, and he is restrained and decent. There are moments when he’s in his element, but these are few and fleeing.

While Chef vanished the moment I stepped out of the cinemahall, what stayed with me were Padmapriya Janakiraman and Svar Kamble.

Ms Janakiraman sizzles, even on her own, and little Svar Kamble is a natural actor.

I would like to see more of them. Soon.