The three stories represented in the form of beautiful water-colour paintings seamlessly blend the themes of mortality. 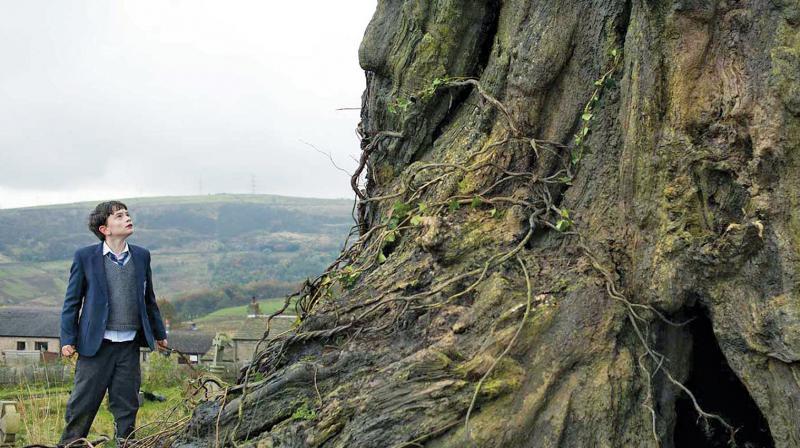 A still from the movie A Monster Calls
Rating:

Based on the novel of the same name by Patrick Ness, Juan Antonio Bayona’s A Monster Calls is about a young boy, Conor (Lewis MacDougall) who is trying to come to terms with his mother’s (Felicity Jones) slow but sure descent into the clutches of death. As Lizzy lays sick in her bed, Conor looks out across his bedroom window towards a church and a graveyard, where an ancient yew tree looms large on the horizon. This view from his window permeates his sketchbook and his nightmares. He conjures up an imaginary, humanoid monster out of the yew tree (voiced by Liam Neeson), who then helps him cope with his grief by telling him stories.

Conor gets bullied by his classmates, is forced to move in with his stern grandmother (Sigourney Weaver) who treats her house like a museum, and has a distant and aloof father (Tobey Kebbell) who is divorced from his mother. The Monster becomes an unlikely ally, not unlike the Faun from Pan’s Labyrinth (2006, Guillermo Del Toro), but where the Faun makes a pact with the little girl, Ofelia, the Monster here is an all-too-serious grandfather figure. The tales he tells are about deceit, loss and anger. There are some sincere moments that bring up the importance of the complexity of human nature, how the world is not objectively black and white, but most people are somewhere in between. But Conor’s dismissal of them as frivolous fairytales injects a tinge of disingenuity to the film because how is the Monster not a fairy godmother to him? At the heart of it, A Monster Calls is about the desire to be seen and for our pains to be acknowledged, with — and not in spite of — our all too human flaws. Conor dares to look the school bully in the eye and gets beaten up repeatedly; he breaks things at home and is surprised at the lack of an ensuing confrontation, leave alone punishment. “You are not punishing me?” a surprised Conor asks timidly of his elders. “What could possibly be the point?” is their standard response.

Extending the theme of mother-son relationship from his last venture, the 2004 tsunami drama The Impossible (2012), Bayona is successful in conveying the bewilderment and loneliness of a child about to lose his mother. As in the previous film, the child-protagonist here, too, rises to the challenge and grows older beyond his years. One could argue a bit too old, for where both Lucas and Ofelia are allowed certain impulsive moments of childlike and childish behaviour (his disgust at the sight of his mother throwing up, and her marvel at discovering a crescent-shaped scar — a sign of her royalty — or her sudden urge to partake of the forbidden feast), Conor maintains a stoic silence about his feelings until the very end. The voiceover tells us, he is a boy “too old to be a kid, too young to be a man.” These lines are telling of what plagues the film as a whole — it is too morose for children, too clunky for adults.

The three stories represented in the form of beautiful water-colour paintings seamlessly blend the themes of mortality and imagination, and these parts remain the highlight of A Monster Calls. Whether she is nursing her husband in The Theory of Everything (2014), or is being nursed here, there is a remarkable serenity about Felicity Jones which is unmatched at both the extremes.

Despite its best efforts at raising questions about the nature of grief and absolute good and evil, this coming-of-age gothic fantasy suffers from a debilitating inertia that renders it pallid, the stunning visuals notwithstanding.