The round, bindi-like birthmark on the shoulder of the sexy siren on screen is all too familial. 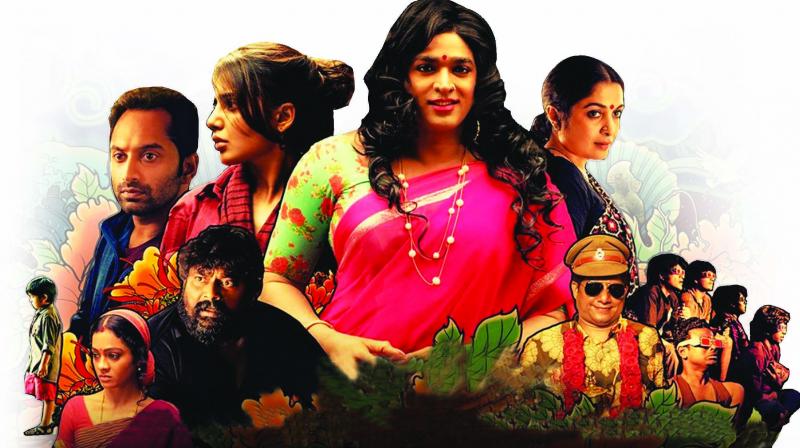 The set up complete, the film moves to the second act in each of these stories.
Rating:

We hear a married woman’s voice. She’s on the phone with her lover, asking him to come over for a quickie. But he is sounding preoccupied. When she asks why, he says that he’s worried about some gangsters he borrowed money from and hasn’t returned.

But her husband is away at an acting class, and she is in the mood for love. So, come over, she says, I’ll make you feel better…

A bed creaks with the rhythmic thrusts of making out and this sound, with a naughty smile, pulls us into Super Deluxe, just as it did in writer-director Thiagarajan Kumararaja’s brilliant Aaranya Kaandam (2011).

Apart from that, and the genius of Kumararaja’s storytelling, there’s nothing connecting the two films.

Super Deluxe is a synthesised composite of four episodic stories that seem separate but are either joined at the hip or barge into the other with wily coincidence.

But just as the DVD begins to play, one of the boys, Soori (Naveen), looses his shit.

The round, bindi-like birthmark on the shoulder of the sexy siren on screen is all too familial.

As Soori feels his entire being spinning in the moral tornado raging inside him, he screams “whore” and just seconds before he dashes off to fix the problem, he smashes the flat screen TV.

Meanwhile, a house elsewhere is buzzing with people, activity and chatter. Manikam (Vijay Sethuspathi), father of one and husband of Jyothi (Gayathrie), who had left his family seven-and-a-half years ago, is scheduled to return. The house is in half celebration, half bitch mode.

Jyothi is both eager and depressed. There’s much banter and griping amongst the older women in the house. But Jyothi and Manikam’s little son, Rasukutty (Ashwanth Ashokkumar), is singular in his focus on the moment his dad will walk into his life.

Almost in a nervous, excited trance-like state, he’s preparing for his dad’s arrival with devotional fervour, and the first thing he wants to do is take him to his school to shut up all those who have been calling him a “test tube baby”.

Somewhere else, in a blue room where a slightly broken, solemn statue of Jesus stands with its head wilting, devotees have gathered and are eagerly waiting for Arputham (Mysskin), the tsunami survivor with a healing touch.

The set up complete, the film moves to the second act in each of these stories.

A body sits crouched in Vaembu’s (Samantha Akkineni) refrigerator, and she flinches when Mugilan (Fahadh Faasil) reaches for the milk packet to make tea for guests sitting just a few feet away.

The broken TV set, meanwhile, has spiralled into a crisis of gargantuan proportions. The father, owner of the TV, will skin all the boys alive if it is not replaced, and a screwdriver the enraged one was carrying to settle his angst has pieced another. The search for money to buy a TV lands them in the living room of the local don, Idi Amin…

Manikam arrives and all but little Rasukutty are stunned into an aghast silence.

A cop is following and filming a couple lugging around a bulging mattress.

Just as these stories, skulking in their own crazy zone with their own set of characters, begin to slowly gravitate towards each other, the film begins to, bit by bit, strip all shades and layers of masculinity that moustachioed, flexed men who so love projecting.

Super Deluxe presents, then lovingly creates and frames the most masculine of archetypes on one side, and on the other are women, seeming rendered powerless by morality, gender, sexuality, and virtue. And then, slowly, it shows what they all are really made of.

The delusional tsunami god so firmly believes in his own healing powers that he’s willing to risk his son’s life.

The woman shunned by the men in her life for being immoral is desperately trying to save the raging boy who was running to lunge at her.

The actor is asked to express his rage by pretending to be drunk and we sit, alongside Vaembu, watching as his insecure innards full of complexes ooze out as tears and snort.

The dad who had strutted back home with a glowing rejection of maleness and an embrace of all that’s feminine, encounters a cop, sub inspector Berlin (Bagavathi Perumal), and is shown his place. But later, in a rather dramatic scene, he leaves with a curse that haunts…

The more toxic the masculinity, the more the film strips it down to show us what idiotic, helpless, wailing, pathetic mess of tears and contorted facial muscles these men are without the women.

Super Deluxe’s pulpy, circular screenplay — by Mysskin, Nalan Kumarasamy, Neelan K. Sekar and Thiagarajan Kumararaja — is original, unique and sharp. It begins to coil in the second act, and just as each story is teetering at the brink of a tragedy, a disaster, a crime, it delivers its sting.

Somewhere towards the end, Super Deluxe takes a detour for an extra-terrestrial encounter. This inter-species tête-a-tête, complete with a Star Wars joke, is a bit vague, halts the narrative and should have been chopped on the editing table.

But it didn’t bother me too much because there’s a cocky coolness to Super Deluxe’s whimsy. Anything can happen here, especially accidents — good ones, bad ones and, most definitely, the bizarre ones.

At times what happens is so stunning and yet the perfect ending that we sit smiling, almost communicating with the shocked characters on screen, saying, “Hain!!??? WTF happened??”

Super Deluxe has a measured pace of its own, and is as much about its spiralling characters as it is about spaces, frames.

In one particular scene, when Manikam is running around looking for his son, I felt like bowing to the cinematography of P.S. Vinod, Nirav Shah, and editing by Sathyaraj Natarajan. The fear and claustrophobia this scene evokes is deeply disturbing.

Super Deluxe moves around a lot, and only two characters have the power to root it — little Rasukutty, and his dad, Manikam. While some credit for this must go to the director and the writing, but mostly the accolades belong to Ashwanth Ashokkumar and Vijay Sethupathi. They are both so incredibly good that in a line up of pitch-perfect actors, all delivering memorable performances — especially Fahadh Faasil, Samantha Akkineni and Bagawathi Perumal — they stand out as warm pools of endless love.

Don’t miss it. It really is super deluxe!