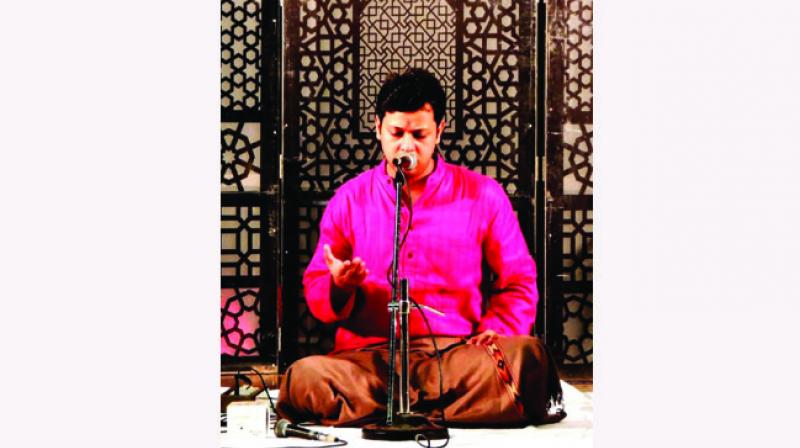 Dhrupad is dominated by exponents of either Dagar tradition or Darbhanga tradition — both trace their lineages to the 16th century.

Raza trustee Shri Ashok Vajpayee, who manages the activities of the Trust, wryly said, “meri pasand ka dhyaan rakhna parta hai” (have to keep note of my choice) in artist selection, which is why there were no instrumentalists featured in the festival.

Opening the festival was Pelva Naik from Mumbai, disciple in the Dagarvani tradition. One of the most popular female singers of Dhrupad, Pelva has learnt from legendary guru Late Ustad Zia Fariduddin Dagar. Her pleasing and soothing presence on stage was matched by a calm and centred recital. Her opening piece in Raga Multani as per the time demands of the north Indian tradition was measured. Without undue recourse to the tools of Dhrupad gayaki; the gamaks (note oscillations) and emphatic layakaari (rhythm work), she presented an alaap and jor that was not repetitive. Because of Holi she correctly sang a beautiful dhammar. (Traditionally, in the Dhrupad tradition compositions for the festival of Holi are called Horis and are usually sung in a 14 beat time cycle, dhammar.) The lyrics were “hori main na khelun” where again her layakaari was beautifully understated, and enhanced by the seasoned pakhawaj player from Indore, Shri Sanjay Agle. 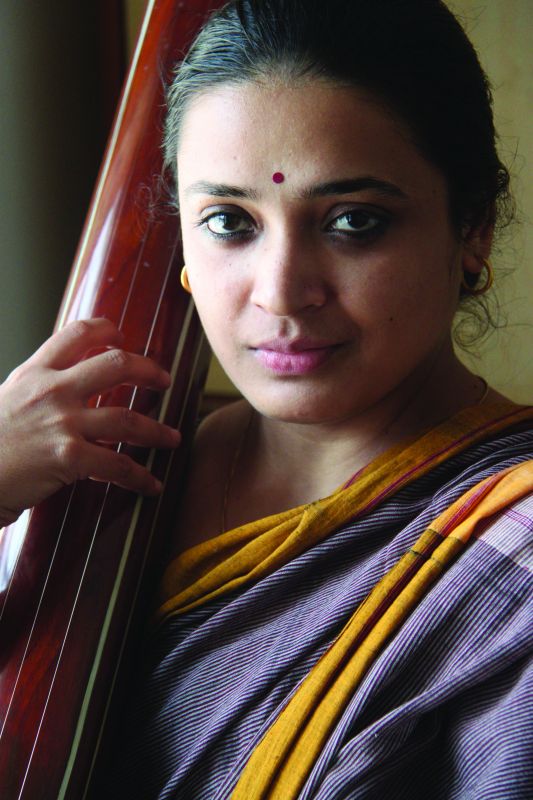 Her voice production was robust and ringing, her rendition of Raga Yaman was innovative, with the additional accompaniment of the pakhawaj by Shri Apurba Lal Manna during the jor most welcome. Laudably Sanchita is not afraid to experiment musically on stage.

Both the compositions to Lord Shiva, and then her “kesar holi” were presented with elan. She ended appropriately with a brief sketching of Raga Basant (Basant is traditionally sung during the month of Spring) in a Holi. Sadly, the concert by veteran Pt Abhay Narayan Mallik had to be cancelled.

The concluding day of the festival started with a brief talk on Pt Siyaram Tiwari, Sangeet Natak Akademi Fellow and Padma Shri awardee, who apart from his training in Dhrupad, his maternal heritage, was also a trained thumri exponent in the Gaya tradition from his father’s lineage. The first concert was by Bhopal based Ashish Sankrityayan, who has a lovely baritone, and whose scholarship impressed.

His attempt to aurally convey the debilitated “ni”(ti) of Raga Puriya, a dusk Raga whose notes should be “in shadow” was perhaps partially successful; but the expert taalim he received is without doubt. Dr Samit Kumar Mallik, son of Pt Ram Kumar Mallik of the Darbhanga tradition sang Raga Bihag in great detail, his powerful voice skimming the lower octave with ease.

The speed in the “madh-aang” displayed immense practice; but one wonders why speed is perceived as an essential component of a vocal concert. Gaurav Upadhyay on the pakhawaj was an asset as his accompaniment enhanced the concert.

The finale concert by Pt Ritvik Sanyal was superb; the elegance of his presentation, pauses, delicate use of each singing technique, use of shrutis in his Raga Jog, subtle layakari impressed. Pt Biswajeet Roy Chaudhury who was part of the audience shared that in the Dagar tradition Raga Jog was termed “Chalnat” and that it had been incorporated into the north Indian pantheon from the Carnatic tradition.

The delineation of the next Raga Malashri, of only 4 notes was equally masterly. Ankit Parikh on pakhawaj provided a wonderful foil. It was truly a pleasure to hear such talented dhrupad exponents who are not heard so commonly in Delhi.