Rayhana’s film At My Age, I Still Hide to Smoke received an overwhelming response at IFFK. 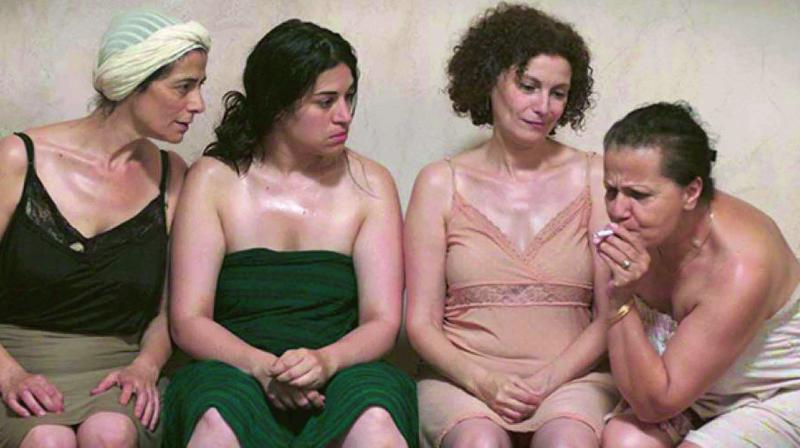 A scene from At My Age, I Still Hide to Smoke

At the lobby of a hotel, Rayhana was chatting with the girl holding her hands, laughing and hugging, inviting her to France, as if she had known her for ages. Once she settles down for a quick chat, she holds your hand and magically, you feel at home. That warm easiness with which she bonds with women reflects throughout her movie At My Age, I Still Hide to Smoke, which was screened to packed houses during all the three screenings at the 22nd International Film Festival of Kerala (IFFK).

“We are all women. Speaking woman-to-woman is easy,” she says in bits of English. Wherever she screened the film, she has been greeted — with hugs and tears at many places and with death threats and abuses in many other places.

But no threat or abuse will stand in her way of telling stories. In Algeria, her homeland, and later, in France, where she took asylum as a 35-year-old, she has faced threats from Islamists. Once, in Paris, she was doused in petrol by extremists and it was a narrow escape from an immolation bid. That was when her play was staged. “It was the same At My Age, I Still Hide to Smoke. I staged it for seven years. The play was in French; the actors — the nine women — kept on changing after they faced attacks and threats,” she recalls.

Rayhana’s growth has been full of fights. She started off as a waitress, then became a theatre actor and after that, an author, a playwright and finally, a screenwriter and a filmmaker. It wasn’t an easy journey, but she’d make it sound cool. “After I married Ben, I had time to write and make a play and a film, because he fed me well,” she laughs. Her colleagues — Azzedin Medjoubi from theatre and Ali Tenkhi from films, were killed, the former in front of her.

Her brother was assassinated in France by Islamists, apparently for homosexuality.

The film, her directorial debut at the age of 55, made in Arabic, set in a hammam (Turkish bath), has a group of women celebrating freedom — to speak, to walk naked, to express their dreams and political, personal and feminist views — protecting a pregnant teen from religious fundamentalists and misogynistic men. As the women take bath, get body massages and smoke together, there are confrontations, ‘blasphemous’ criticisms against religion, fun moments, talks about dreams, oppression, sex, rape, politics and references to the past of each one of them.

“The film is about the world of women everywhere. Everywhere I screened the film, women told me this is their story, their life.

That’s what I too wanted to tell the world. Men just announce ‘talaq, talaq, talaq’; it’s easy. After I made movies, I am being called a b**ch, w**re...,” Rayhana adds.

The movie was banned in Algeria and all Arabic Muslim countries. The exteriors were shot in Algeria, but the hammam was set in Greece. “No Algerian actress was cast, because all of them rejected. All the actors were from Greece. The lead, played by Hiam Abbas, is a Palestinian. Apart from her, Biyouna (star in Tunisia and Algeria) and Nadia Kaci, all the other women are debutants. The actors, who appear as the extremists in the climax, are all Greek actors.”

Only in Tunisia was her movie welcomed. “The situation is different there after the Jasmine Revolution. The rise of feminists has brought about gender equality in Tunisia and my film was praised a lot when screened there,” she says.

In India, people loved At My Age, I Still Hide to Smoke, but Reyhana says one-third of the film was ‘lost’ in translation. “The English subtitles were badly done; there’s a lot more you haven’t heard. I would like to screen it with proper subtitles in English and if possible, in other Indian languages,” she says.

Rayhana says she has no qualms even if she doesn’t get an award at IFFK. “I have the audience award; the responses were so great. I make movies for the audience and this is the biggest award.”

However, the film later went on to win the audience poll award at the IFFK that concluded on Friday.

Tags: international film festival of kerala, at my age, i still hide to smoke