Thriller that packs a punch

The Unlisted works because it offers only 15 episodes that capture the narrative in a fast-paced manner with no needless drama. 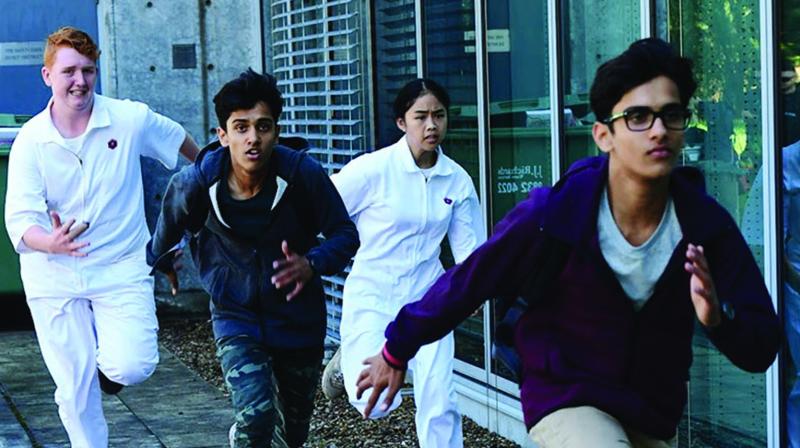 A scene from the series
Rating:

A good sci-fi mystery thriller should be able to captivate you right from the start. It throws questions at you right from the begining. It should also send you on an unending quest to find answers to these questions. Netflix’s new Australian series, The Unlisted is bound to make you do just that. Set in Sydney, the series parallelly tells the stories of twin brothers Dru and Kal alongside The Unlisted,  which is made up of a group of four kids.

Few seconds into the first episode and the mystery starts. You will get to see men in black cars chasing kids who disapper into the tunnel. Meanwhile in the suburbs, is the Sharma family, who is headed by the matriarch — Dadi. The Sharma’s are a typical Indian family in Sydney who cling to the culture and traditions of their homeland. The scenes that unfold in this Indian household will make you reminisce your own. Dru and Kal (Dadi’s wombats) though twins are opposite in every sense. While Dru is a nerd, Kal is a jock. So where does the exact story start? From a routine dental exam at their school where the kids are forced to line-up by the creepy Mrs Biggs.

Due to his fear of Dentophobia, Dru gets Kal to take his place. So now Kal is fitted twice (with a chip in the tooth) instead of Dru. Running the show is the Global Child Initiative by the Infinity Group. Once fitted with these chips, all the students start behaving weirdly. They excel at everything. While all the others at this school are doing well including his twin, Dru has to catch up with them. On the other hand are The Unlisted, (who are a group of kids on the run and living underground). They are on the run from the same people that fitted Kal and other kids with the chips and being controlled. A chance meeting between the twins and The Unlisted sets a chain reaction that ends in the climax.

The series works because the makers do not drag the storyline or the plot. With each episode not exceeding 30 minutes, and 15 episodes in total, The Unlisted makes for binge-worthy watch. You don’t have to wait long for the suspense and mystery to set in. There is no unnecessary storyline where lead characters fall in love. It’s just a pure mystery thriller.  Dadi proves to be the only fun character who is constantly throwing her one-liners on unsuspecting people.

What doesn’t work is the list of unnecessary characters like Reagan who is just plain annoying. What happens to these kids? You will have to watch to find out.