Getting to Cannes, and surviving it

Cannes is five hours by train and eight-and-a-half hours by car from Paris. 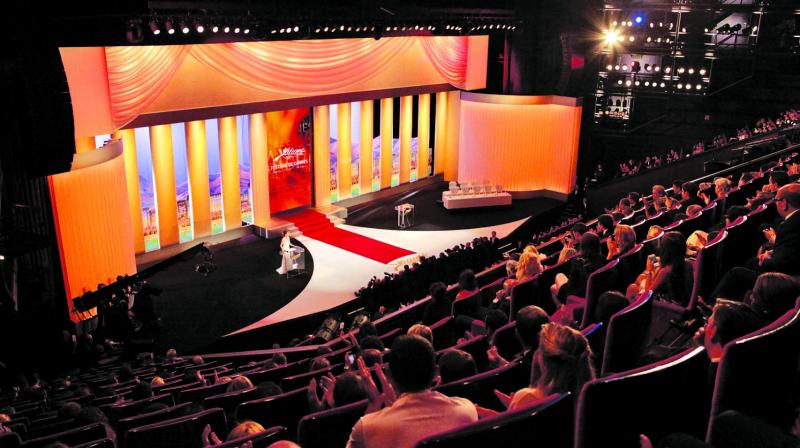 Reset your body clock completely. That is rule number one in Cannes. Time management is of the essence at the world’s premier film festival. Is that any surprise? The Cannes Film Festival (scheduled this year from May 17 to 28) is a veritable whirligig of screenings, meetings, parties and explorations that lasts all of 12 days if you decide to go the distance.

The hours zip by in a blur: some of this stupefaction might have something to do with the wine and champagne one ingests freely during the industry bashes that kick off before sundown and refuse to wind up until the wee hours of the morning.

Day and night cease to matter in Cannes. Too little sleep, too much coffee and very little time for full repasts can play tricks with the mind and stomach. Knowing when to pause for breath — and for strategic, quick detoxification — is crucial if one is to get through the Cannes Film Festival in one piece. It’s a glitzy cinema jamboree that, for most old hands, is part carnivalesque performance, part intense pilgrimage. It is easy to get carried away here. In Cannes, the wristwatch ceases to work quite the way it does on other occasions and in other places. Inevitably, all major film festivals are media events. Cannes is an event, too. But there is none quite as big. The only events in the world that attract more media personnel are the quadrennial Olympic Games and Fifa World Cup.

Securing a film festival badge — that’s the citizenship card on Planet Cannes — is no big deal for anyone, be they filmmakers, industry mavens, journos, committed cinephiles or plain arrivistes, provided they try hard enough and start planning early enough. A confession: I landed in Cannes for the first time over a decade and a half ago without a hope in hell of gaining access to the festival. It was the blind dive of an eternal optimist. I hadn’t even applied for media accreditation (imagine the nerve!). But with a bit of help from a dear old Indian filmmaker-friend, a man much more enterprising than me, it took just 24 hours for the press badge to arrive and my name to be registered on the roster. It’s been there ever since. It is easy to get addicted to the Cannes Film Festival.

If you, too, wish to partake of the exhilaration of catching the latest (if not always the finest) works of the world’s most celebrated auteurs, mavericks and emerging masters fresh off the assembly line and get swept up in the heady combination of glamour, cinematic discoveries and new friends and connections, you need to quickly master a trick or two so as not to be left behind in the maddening scramble that the festival turns into as soon as curtain goes up on it with the screening of the opening night film.

Getting to Cannes isn’t the biggest challenge. Surviving it is. Cannes isn’t cheap, certainly not during the festival period. Fancy French dinners are out — they cost a bomb. So find yourself a studio apartment with a kitchen. Stock up on bread, butter, fruits and oats to ensure that you are never overly famished. It is hard to digest indifferent or impenetrable films on an empty stomach. Never, repeat never, try in Cannes what you might get away with at home. In the Palais, the supply of espresso and other beverages is plentiful and gratis.

Cannes is five hours by train and eight-and-a-half hours by car from Paris. All major airlines can take you from Delhi and Mumbai to Nice Cote d’Azur Airport, the gateway to Cannes, in a combined flying time of 10 hours via Paris Charles de Gaulle Airport. If you book early and wisely — this goes for both the flights and the accommodation — you might land a deal that could save you several thousand rupees.

But the film festival per se is something else. Navigating it right and sans mishaps comes from either practice or sheer bull-headedness. This writer was born with the latter trait — so no worries on that count — and now also has enough of the former to fall back on. The Cannes Film Festival is a hard taskmaster — it demands complete submission. It takes some conditioning to warm up to it. If you rush in head first, you face the risk of being knocked out cold. Dip your feet gently in the waters, feel the temperature, get used to and then take the plunge.

A broad tip: ideally, try and land in Nice early on the opening day of the festival, if not a day before. The Palais des Festivals is roughly 30 minutes from Nice airport by road. Once you are in Cannes, don’t worry right away about taking in too many films. Take a day or two to get accustomed to the frenetic pace and rhythm of the festival. Cannes calls for both oodles of patience and bursts of energy.

Besides the 50-odd films that annually constitute the official selection of the Cannes Film Festival, the Marche du Film (Film Market) hosts screenings of brand new and not-so-new titles that are looking for European and international buyers. Add to that the independent parallel Director’s Fortnight and Critics Week programmes, and you have an enviably wide range of options to choose from. When you are done with the daily binge-watching — the number of films you watch can vary from three to six a day depending upon how desperate you are to make the most of your time in Cannes — head to the parties on the beach and in the hotels on the Boulevard de la Croisette. If you are up to it, they can keep you up till pretty late.

If you are a film critic, ensure that you don’t wake up groggy-eyed. It would be useless blaming the champagne and the wine if you were to miss the 8.30 am press-only screening of a competition film in the Grand Theatre Lumiere. With nearly 4,000 accredited journalists in attendance, rest assured that every seat in the auditorium will be taken well before the lights go out and the show begins. If you don’t make it in time, the loss will be entirely yours.

But the Cannes Film Festival does give you a second chance in the form of repeat screenings of all its major films. These are played in the Salle du Soixantieme (a facility created on the grounds of the Palais to commemorate Cannes Film Festival’s 60th edition in 2007.

The press badges have five categories, with yellow being the most basic, followed is ascending order by blue, pink, pink pastille and white. The amount of time that you spend standing in the sun — or the rain — outside the Grand Lumiere or Salle Debussy (the venue of the Un Certain Regard screenings) — depends on the colour of your badge. The white badge holders, the crème de la crème of the Cannes press corps, walk in first, with the pink pastille guys following them. Pink is reserved for the middle rung of journalists, while the blues and yellows bring up the rear of the pecking order.

It is a caste/class system that shouldn’t be difficult for us Indians to comprehend. Colour is a bar in Cannes. So seek the right one. You will then have no reason to see red when the sun slow-burns you to a darker shade of tan or the rain drenches you to the bones.

Saibal Chatterjee is a film critic and writer