A film that has taken the world by storm, the Yash-starrer is the rage among non-Kannadigas thanks to its promotions. 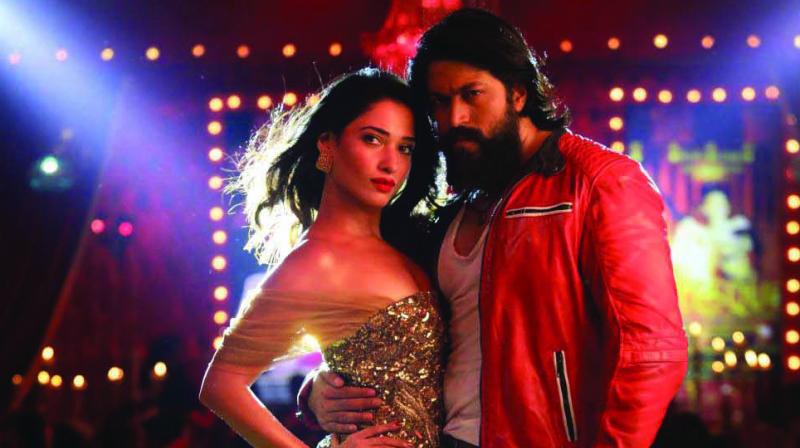 Yash and Tamanna in a still from KGF

With KGF: Chapter 1 creating waves across the country, Kannada cinema seems to have reached audiences from diverse backgrounds, some that had not even heard of Sandalwood previously. While the Prashanth Neel-directed Yash starrer has been released in Telugu, Tamil and Hindi as well, there are many non-Kannadiga movie buffs who have opted to watch the mega film in Kannada. Non-Kannadigas from across the world, who have seen the film share their KGF experiences with us.

IT Employee Sreedhar Sriramula, is a Telugu speaking bloke who lives in Chicago and watched the flick there. Although not familiar with Kannada, he watched the film in namma language, thanks to subtitles. “I loved the to and fro screenplay — the director showed his excellence through this. Yash is brilliant and the other actors did their job well too.  The background music is extraordinary and I’m eagerly awaiting Chapter Two. I'm planning to follow Kannada movies now," he says.

Businessman Siva Kiruba is an ardent movie aficionado who lives in Coimbatore. Having watched KGF in Kannada at The Cinemas in Brookefields in his hometown, he says, “I’ve learnt Kannada only through watching films. KGF took the Kannada movie experience to a different level — it was the first Kannada movie to release in a proper multiplex in Coimbatore. The Kannada industry must think beyond their boundaries. Language isn’t a barrier anymore — subtitles are helping us big time. KFI must venture into other states by screening their movies as Kannada films never release with big fanfare in Tamil Nadu. Even if they do, it’s just one or two screens for the whole state. It was great to see a large number of people flocking to watch KGF — it was unbelievable and most of them were non-Kannadigas. If Kannada filmmakers release their movies in our state, we can watch them in theatres rather than watching them online. Our district and the nearby ones have a decent number of Kannada-speaking people, so they should take our request into consideration.”

While Siva has always watched movies of Shivanna, Puneeth Rajkumar and more, he’s now added Rocking Star Yash to his list of favourites. “Also, if there’s one movie I don’t mind watching again and again, it is Om. I travelled to Bengaluru just for the digital release,” he smiles.

Former filmmaker Saikumar Kannan watched KGF in Singapore. ethically, the film was great — be it the cinematography, editing or sound mixing. These were as good as any other commercial film from Kollywood, Tollywood or Bollywood which I consider the top three industries in no particular order. As for the content, it wasn’t great — at least for audiences who are accustomed to such films in Tamil and Telugu. I felt it was hyped because it was the first for KFI,” says the cinema enthusiast who believes that Kannada cinema first needs to bring its audiences to theatres before competing with other industries.

“They’ve started doing it now — I loved the line-up we had in 2018. KGF was a brave attempt — the issue was of course the lack of a strong screenplay. The film started out promisingly, but I was disappointed with the latter part,” he says.

With KGF now becoming the highest grossing Kannada film of all time and reaching out to non-Kannadigas outside our state, it’s about time KFI did better to cater to worldwide audiences.