Mirza Ghalib is one of my favourite poets, says Tom Alter

Says actor Tom Alter, who brought alive the magic of rumi’s poetry along with dancer Zia Nath in the play A Poetic Whirl. 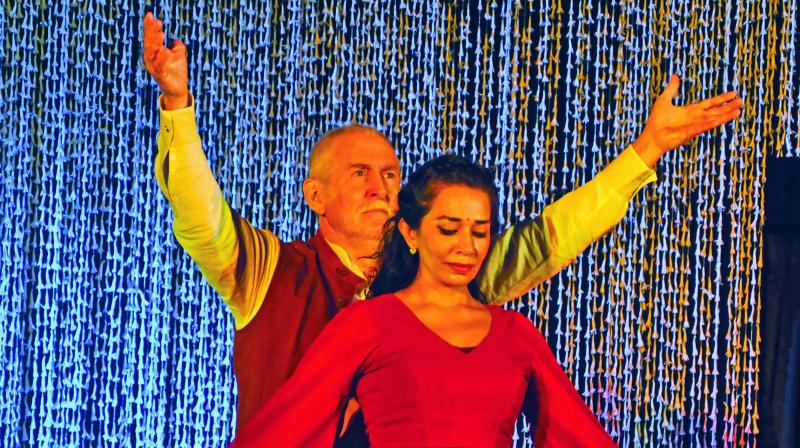 A scene from the play A Poetic Whirl.

“Na tha kuch to khuda tha, kuch na hota to khuda hota, duboya mujhko hone ne, na hota main to kya hota”. A couplet by Ghalib set the mood for the evening as Tom Alter stepped on the stage, reciting it from a piece of paper in his hand. Dressed in kurta, pyjama and turban, he brought alive the magic of Rumi’s poetry and Tantra Sutra.

Titled A Poetic Whirl, the play organised by Young FICCI Ladies Organisation (YFLO) was staged at The Lalit hotel in the city recently. Accompanying Tom was Zia Nath, who was also the producer of the play. Her performance added a new dimension to the poetic verses.

Tom Alter, who has many years of experience in theatre, spoke about his friendship with Zia and the reason behind participating in this play. “I have worked with Zia previously. In the past four years, I have worked with her in six different plays and when she approached me for this one, I couldn’t say no. I love her work and we share a great tuning,” said Tom.

In the play, Zia’s performance was focused on synchronising gestures with verses. While in Shiva Tantra, focus was on the basic nature of human beings and the seven chakras, and the couplets of Rumi concentrated on spiritualisation of the universe and the poet’s reunion with dance.

Zia, who stunned the audience with her expressions, finds dance and herself inseparable. She says, “Dance is a part of me. It is a beautiful feeling to have your body moving its forces into Earth.”

The artiste has a special place for this art in her life as she quit her job in advertisement in order to pursue her career in dance.

Meanwhile, for an experienced artiste like Tom, reciting poetry was not an easy task. Speaking about his role in the play, he said, “Initially, I found this part very challenging. I had no knowledge about Shiv Sutra, and neither was I interested in it. But I managed to pull it off.”

The actor further mentioned he has an inclination towards poetry. “I read poetry a lot and dedicatedly follow Hindi, English and Urdu poetry. I am very much enchanted by Maithili Sharan Gupta’s creations and I also like the poetry written by my brother John. Mirza Ghalib is also one of my favourites,” reveals Tom who has played the role of Mirza Ghalib in many plays.

The actor further adds that he is in love with theatre and enjoys it a lot. On being asked about the dwindling interest of people in taking up theatre as a profession due to lack of money in it, he responded positively, “Theatre provides enough money for people who see their future in it and there are several people who have taken up this profession and are doing well.”