Entertainment   Bollywood  27 Dec 2017  Marriage only with someone who values my dedication to career: Priyanka
Entertainment, Bollywood

Marriage only with someone who values my dedication to career: Priyanka

When asked about marriage plans, she said it would happen at the right time, quipping 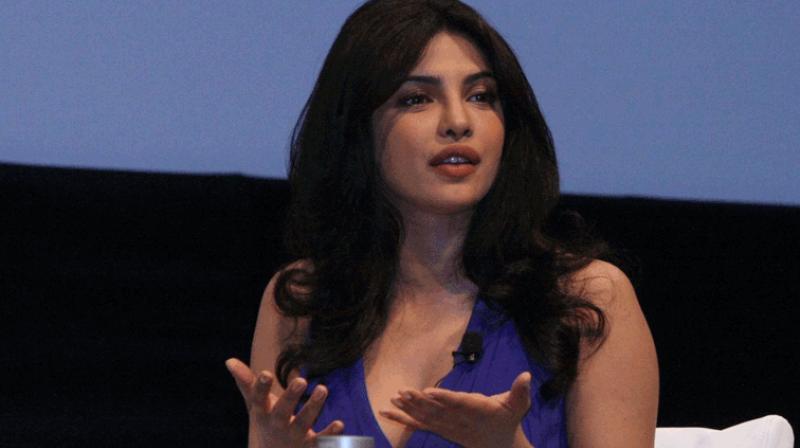 New Delhi: Actor Priyanka Chopra on Tuesday said her greatest achievement has been her ability to consistently conquer fear, and her biggest dream is to leave behind a legacy.

The 35-year-old actor, however, became emotional when she said that her biggest regret would be not being able to spend enough time with her father, Ashok Chopra, who passed away in 2013 after battling cancer.

"I know I come across as tough, sassy and witty. That is a big part of protecting myself. There has not been anyone holding out a safety net for me. So, I trust my instinct, so that even if I fail, it'll be my failure... My biggest regret is I didn't spend as much time as I did with my dad," Priyanka said.

The actor, who was in the capital to deliver the Penguin Annual Lecture, was in conversation with NDTV anchor Sonia Singh.

She addressed a full-capacity auditorium at Siri Fort here on the theme 'Breaking The Glass Ceiling: Chasing a Dream' at the 11th edition of the event.

Talking about chasing her dreams - from Bollywood to Hollywood to doing philanthropy - the National Award-winning actor said her biggest dream is to leave behind a legacy.

"I always have the same dream that manifests into different things, and my biggest dream is to leave behind a legacy," she said.

The actor said she represents all the people who have shown faith in her, a simple girl who came out of an Army School from Bareilly.

Priyanka, who has made a mark globally and continues to shatter the glass ceiling, said for her, the dream has always been much more than "a car or number of zeroes on my cheque".

"I want my fans and people who have faith in me to one day turn back and say 'yeah, that was the right reason we loved her'," she added.

Priyanka said although year 2017 was "tumultuous" for her, she was proud of herself for making it to the top 10 - the only female actor - in the 2017 Forbes India Celebrity 100 list.

When asked if those zeroes matter, she said, "Yes, because I work really hard for them. I'm not someone who was born with a silver spoon, even though my parents always gave me one. But I've worked really hard to be where I am, and each of us deserves to be compensated for it."

The actor, who was at her sassiest, added, "How much I make for spending some portion of time - the boys are never asked those questions. Their zeroes are ridiculous, have you even seen the zeroes on their cheques?"

She said her making it to the list is a great moment for her, but it is also sad that it was dominated by the male stars.

"Why aren't there other females there on the list? Don't get me wrong, I'm very proud of myself that I had the ability to work so hard that I can stand shoulder-to-shoulder with my male counterparts today in the top 10 of India.

"But at the same time, it brings up the question that why is there just one of me - female actor when there are so many males in that list?"

The glass ceiling exists not just in India but it's a worldwide problem, and it cuts across all spheres of life, not only the entertainment industry, she added.

Touching upon the issue of racism, Priyanka said it exists everywhere and she realised that "South Asian actors are still a novelty in the West".

The actor, who has become an international icon with her stint on the US small screen with 'Quantico' and her Hollywood debut with 'Baywatch', said that attending this year's Emmy Awards after-party with handful of South Asian actors such as Aziz Ansari and Riz Ahmed in a room full of 400 people showed her there still is a long way to go.

"The fact that you don't change anything about yourself, and still get the world to notice you is when you are a success story, and that's what I did," Priyanka added.

When asked about marriage plans, she said it would happen at the right time, quipping "with someone who matches my standards".

"I won't be apologetic for my career at all, and I work damn hard. I've left my home, my family and friends... Lived in a foreign country to be able to to be where I am, and that was a lot of sacrifice. I went there at the peak of my career in the Indian film industry. I miss acting in Hindi, the language, the food... So it would have to be with someone who values my dedication into my career," Priyanka said.

When asked about the 'Padmavati' controversy, the actor fired back at the anchor for asking questions about "another film and another filmmaker, instead of my life, for which we are here".

With the polarised atmosphere in the country, she counter questioned, "Why is this not always asked to the politicians, who are actually responsible? What can an actor do to change about what is happening in the country as much as a part of the civil society ....

"I can have an opinion, I don't need to be pushed into a corner to give it, just for me to become a scapegoat," she said.

The event was also attended by author-columnist Shobhaa De.