I don’t have much choice, says Abhay Deol

Abhay Deol has always stood out as one who is very particular about the scripts he chooses. 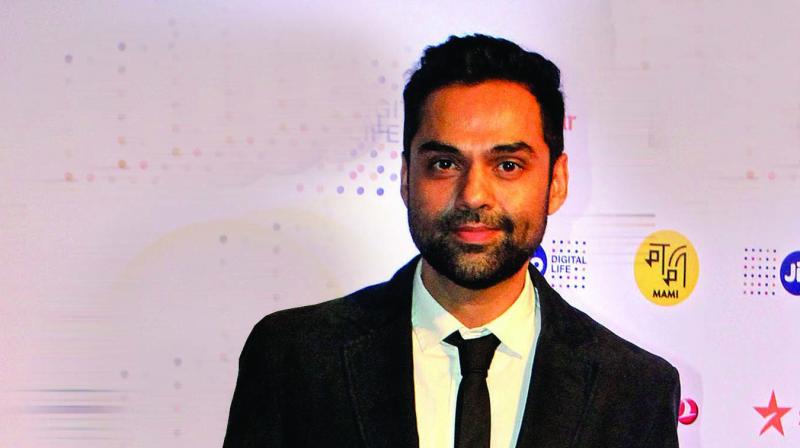 When it comes to choosing films Abhay Deol finds himself with limited options as not many filmmakers opt to take up subjects and stories that are different from the formula movies Bollywood is known for.

Amidst the bustle of promoting his latest film Nanu Ki Jaanu — a horror comedy, Abhay Deol talks about how he is not choosy when it comes to films, rather there is a scarcity of content that deals with realistic concepts.

Instead of following the grammar of Bollywood films, Abhay Deol has always stood out as one who is very particular about the scripts he chooses. “I do the films that I believe in,” says Deol, who made his debut in 2005 with Imtiaz Ali’s romantic comedy Socha Na Tha. Post that he has only appeared in limited films but the ones he does lean more towards independent and realistic cinema. “Sadly, very few films in Bollywood do not follow the basic formula. Since I choose not to do formula-based films, I don’t have much choice as they are rarely written,” he says.

Talking about his forthcoming film, he shares, “I was sitting with Sajid Qureshi in a meeting discussing one of his films when all of a sudden Faraz Haider and Manu Rishi barged in and said we too have a script for you. Since Qureshi was producing both the film, and the script for Nanu Ki Jaanu was near completion compared to the other, I had a look at it and I had to say yes.”

Deol has worked with Rishi and Faraz earlier, in the film Oye Lucky! Lucky Oye!, and this was one of the reasons why their chemistry works so well. “Since we have worked together and done workshops, all we had to do this time was a little brush up,” shares Deol, who after the modest success of his debut,  garnered praise for his performances in films like Manorama Six Feet Under (2007), which won him the Best Actor Award at the Indo-American Arts Council Film Festival, and the commercially successful Oye Lucky! Lucky Oye! (2008).

Just as Oye Lucky! Lucky Oye! was set in Delhi, this film too revolves around the city. For Deol, Delhi is a second home, not personally but on the work front. “Most of my movies have been shot here and I have many great memories. The people have always been welcoming,” he says.

But it isn’t just the films that have kept Deol in the limelight, his stand on not endorsing fairness creams has been much appreciated. “Recently there have been articles about how fairness creams have steroids in them and a prescription will be necessary, and there are various hazards that the big brands never talk about. Aerated drinks are another big no for me as they are not only dangerous for our health but also for the environment. Thus, there has to be a sense of responsibility,” shares Deol who believes that one puts him or herself on an edge when they take a certain stand.

“One can be misinterpreted, even judged in a wrong way and it is often seen as a publicity stunt. It is something I really detest. So, going on social media and talking about the whole concept of endorsing fairness creams was hard but a much-needed outburst,” he says.

Sadly, Deol feels that more often the issues raised by celebrities are forgotten and the celebrity becomes the issue. Thus, he feels that there is a need to work behind the scenes. However, he appreciates the fact that certain celebrities are able to use their position to mark a change.

Keeping this much-needed change in mind, Deol tries to take up movies that talk about empowerment and change. “When I started working on Dev.D the whole idea was about empowering women. Maybe Chanda was as week as Devdas and that’s why they connect but Paro is not weak. She is not someone who will take whatever the society throws at her. It’s essential to keep in mind that the audience comes out feeling a certain way when they watch a film that suppresses women and one that empowers,” says Deol, adding that he thinks this is one of the most effective ways he can help bring about a change in a society where there is a huge bias based on gender and nepotism.