He said everyone must be thankful to the police force, medical staff and those working in banks for risking their lives 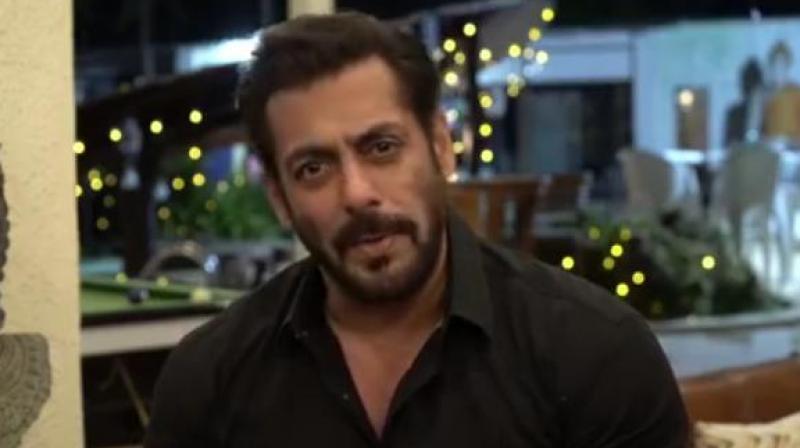 Bollywood actor Salman Khan used his star power to express anguish and disappointment at people flouting lockdown rules and pelting stones at healthcare workers as the country grapples with the coronavirus pandemic.

The "Bharat" star, who is currently at his Panvel farmhouse, urged everyone to abide by the guidelines laid down by the government to contain the spread of the deadly virus and praise the efforts by all those working on the frontlines.

'Bigg Boss' is not starting, this is life's Bigg Boss' going on. There are some people who are violating (the lockdown). I had come here for a two-day holiday but corona has sent everyone on a 'holiday'," he said in the Instagram video shared on Wednesday.

"First we thought it was just a flu. It will all get over in a few days and everyone will be back home. But when lockdown happened, it became all serious, he said.

He is currently at his farmhouse with his mother Salma, sisters Alvira Agnihotri and Arpita Khan Sharma, brother-in-law, actor Aayush Sharma, nephew Ahil and few friends.

Sharing an incident about the callous behaviour by one of his friends, who had gone out to get vegetables from a nearby village, Salman said, Police are there all around and they are doing a good job. He (friend) had the pass. When the police stopped him on the street, he took off the mask to speak with the policemen, who in turn told him to put it back.

"He understood he shouldn't have done it. He came back and narrated this story to us. When he got back home, I told him that taking off the mask was a stupidity, the actor added.

The intention behind narrating this story, the 54-year-old star said, was to make people aware about how they are putting their families and everyone else at risk by not following the lockdown rules.

In any disease to get the result positive is a very sad thing, especially for a disease that has no cure and such a person losing hope is not good. And to not understand the sadness of those who have tested positive is anti-human.

"The positive tested patients have understood that it is their mistake and those who are negative at the moment are not taking things seriously will soon turn positive as well. And they will then spread the disease to the family, to the locality, to the city and then to the entire India," Salman said.

The actor said the government has asked everyone to stay at home and not do social gatherings and rather spend time with family.

"Do your prayers at home. We had learnt in our childhood that God resides within us. Everyone has to die someday, but do you want to actually die? Do you want to put the country at risk, starting with your own family?

"And you have to think whether you want to support the police, doctors and those working in the banks or not.

He further said if everyone would have followed the guidelines properly, the lockdown would have been lifted.

"If you wouldn't have gone out in groups or with friends, then police wouldn't have hit you. They don't enjoy it. No one has stopped you from going to buy essentials, but wear masks and gloves. The government has assured that all the essential items will be available," the actor asserted.

Hailing the efforts of the frontliners such as the healthcare workers and police force, Salman said, Do you think doctors, nurses, policemen, those working in banks are immune to coronavirus? They are still working 18 hours and are doing this for you, not to stop you, but to stop coronavirus because the disease does not see class, economic standing or age. Police is doing their duty, but you are not doing your duty to stay at home.

You are throwing stones at doctors, nurses who are saving your life," he said in a reference to incidents of doctors and health workers being attacked across the country.

"And those who are coronavirus positive are running away from the hospitals. Where are you running? Towards life or death? Just imagine if these doctors and police wouldn't have been there, then those who think it won't happen to them will take the entire India to doom," he added.

Salman said he salutes those who do not have anything to eat and yet decide to sustain without food as they understand it is better to sustain the way it is going on than risking their family's health.

This shows India is united, he added.

He said everyone must be thankful to the police force, medical staff and those working in banks for risking their lives.

"Let it not be so bad that they'll need the military to make you understand," he concluded.