She came on January 5 to meet Om Puri to talk about the next film she was doing. 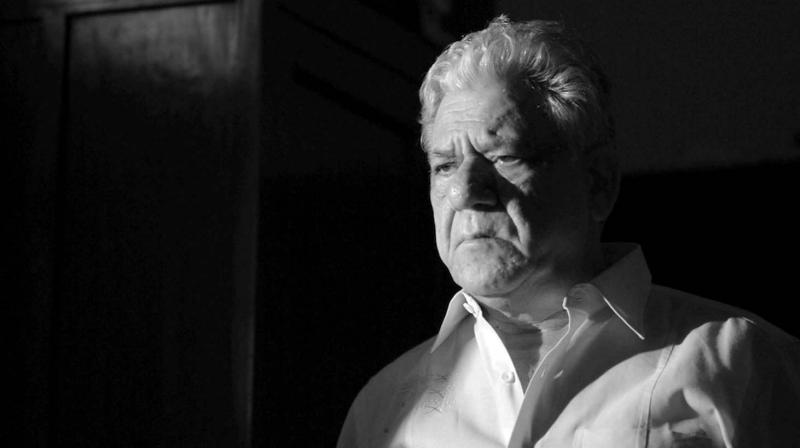 Om Puri, in a still from the film.

Sarah Singh walks into an exhibition of pictures at the Kochi Muziris Biennale, and talks about a delightful little moment she’s just had. At the Aspinwall House she’d stepped into a room and found this little girl of four or five with a big smile on her face, wanting her picture taken before every work of art there. And there, by her description of that scene, you realise Sarah can create visuals for you, she spends a lot of time observing, reflecting and then creating. At the Biennale with her film A Million Rivers, Sarah speaks about Om Puri, the star who never acted like a star, who after five minutes of meeting with her, asked ‘When do you need me?’

In a sad coincidence, days after his death, New York-based Sarah brings this film where his character confronts death. “Throughout the film he keeps repeating the image of bringing the gun up to his face as if he is going to kill himself. It’s never revealed whether or not he does. There’s enough information to create possible stories on what might be happening,” she says.

She had not come to India to screen the film. She came on January 5 to meet Om Puri to talk about the next film she was doing. On January 6, he passed away. So as a tribute, the Indian premiere was held in Mumbai on January 30 and the second screening at the Biennale on Tuesday. Her memories of him are too many. “One day when I was sitting with him in his apartment in Mumbai, we could hear crows. And very pensively, he said you don’t hear sparrows anymore, it’s only crows. There is a lot of introspection in the calmness about him. I didn’t have to direct him, just describe what’s going on in the scene. In one take he does exactly what’s needed and more. He never questioned me. He even encouraged another actor not to question.”

A Million Rivers is Sarah’s first fiction feature. Before that, she had a documentary — The Sky Below.

“The film is for the art world.” And she paints too — began on the years she felt too shy to make a film because that meant interacting with a lot of people. But there came a point in her early 30s when she realised if she wanted to make a film, she had to do it soon. Like her star Puri, she goes pensive. “Life cannot be explained in one way. We are all individuals.”