Is Bollywood an intruder?

Even as the likes of Priyanka Chopra lend support to Marathi cinema, the industries are divided over the exchange. 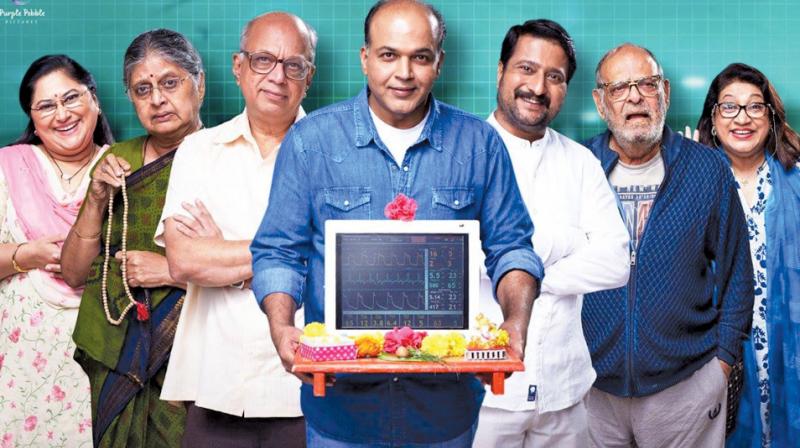 A poster from the movie Ventilator, which is produced by Priyanka Chopra.

Actor and filmmaker Mahesh Manjrekar isn’t quite thrilled with Bollywood A-listers looking to venture into Marathi cinema. While several Bollywood biggies are suddenly aware about the Marathi industry as a profitable market, he hopes that Bollywood doesn’t ‘spoil Marathi-language films.’

Crediting this peaked interest to the success of Marathi cinema in the recent past, the Natsamrat director thinks that everybody now wants to jump on the bandwagon. “Priyanka Chopra has produced a Marathi film (Ventilator, featuring Ashutosh Gowariker). Even John Abraham announced he wants to make a Marathi film. Suddenly everyone wants to jump on the bandwagon — Shah Rukh Khan, Rohit Shetty also want to do a Marathi film. But, I hope they don’t come and spoil the market by making their kind of cinema,” he said at an event in the city.

This, despite Mahesh being part of some acclaimed Bollywood films. Another big name that the actor didn’t mention in his statement was that of superstar Salman Khan, who appeared in a cameo role in Riteish Deshmukh’s Lai Bhaari, and will soon be seen in a much substantial role in Riteish’s next.

Pallavi Joshi, who was last seen in Buddha in a Traffic Jam (2014), agrees with Manjrekar, to a certain extent. While she is flattered about the interest shown, the actress is also concerned about any side effects these projects may have on the Marathi industry. “If there are so many big stars trying to venture in Marathi cinema, it is an indicator that our in-house cinema is doing commendably well, and that producers consider it to be a lucrative market, which is something I’m happy about,” she says.

Having said that, one must tread with caution, Pallavi warns. “As long as B’wood only remains producers, that is okay. But if they start interfering or participating in the creative process, Marathi cinema will go for a toss because at the end of the day, the audiences aren’t going to accept the kind of cinema that works in Bollywood commercial pot boilers,” she states.

Riteish is well aware that Marathi films thrive on content. Which is why, the actor-turned-producer has always maintained that no amount of Bollywood glitter will outshine the stories in his films.

He explains, “Marathi film industry has worked only because of its content and I think that shouldn’t change. It’s bold because they make films with different content, which we can never make in Hindi.”

Riteish adds, “So, whatever film I make, the content should be interesting. The industry is booming because the youth that used to watch Hindi films is now watching Marathi films and that’s because of the content,” admits the actor, who roped in Salman to be part of the Marathi cinema landscape.

There are others however, who welcome the across the state border exchange. Atul Kulkarni, for instance. The actor has won much praise in both Hindi and Marathi industries and believes the give-and-take to be healthy. He says, “We need to stop looking at Marathi film industry as a different industry. When you have people who have the power to make things better with their technical expertise, or marketing, and believe in investing in you, I think we should welcome it. If Marathi cinema has good stories and actors to offer, Bollywood big names can only help us boost that talent.”

Whether one likes it or not, Bollywood has the monies and thereby, a bigger reach. Pallavi Joshi acknowledges this fact even while making it amply clear that in the creative department, Marathi films take the cake. “I think Marathi actors are superior to their Hindi counterparts because they have knowledge about their art. Despite that, they are paid peanuts for their work and it breaks my heart to know that. I think it is high time that actors like SRK, Priyanka and John make their way here because once the budgets will increase, production value will too, which means Marathi actors will get paid better,” she admits.

Eventually, it is about getting stories across to the audience. “This business is about telling stories. If a known face gives you the right guidance, then why shouldn’t we take it? There is so much to learn from them,” Atul adds.

While the debate on which side is better is an unending one, there are a few actors such as Amruta Khanvilkar, who aren’t perturbed by the crossovers. “For me, it’s about creating your own space, rather than giving competition. I wouldn’t personally want to go to Bollywood, because it’s very vast, and I already have an audience here. But, luckily, the Marathi industry has it all,” she says confidently.

—With inputs from Uma Ramasubramanian