Her smiling eyes said it all: Aishwarya Rai Bachchan

Actress Aishwarya Rai bachchan reveals that Fanney Khan is the first film of hers that Aaradhya has watched. 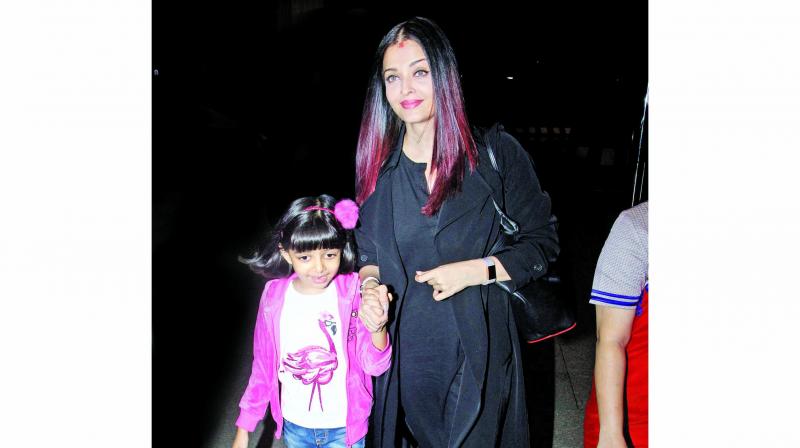 Aishwarya Rai Bachchan has never let her iconic status or her career come in the way of her duties as a mother, a wife, a daughter and a daughter-in-law. Just how she manages to play all these roles to perfection and still find the time to be one of India’s most recognised entertainers is a mystery to me. Not to the lady herself, though.

“It’s something I’ve grown up with. From the time I was 18, I’ve been juggling many responsibilities. Of course, after Aaradhya’s birth, my priorities have changed completely. She comes first, everything else is secondary,” says the protective mother, her voice lighting up with pride as she mentions her daughter.

“Do you know it’s the first time Aaradhya’s watched one of her mother’s films. I mean, she’s seen me on television before. But Fanney Khan is the first film that she’s actually sat through,” Aishwarya adds, shyly.

And what did Aaradhya think of mama dearest? “I think her smiling eyes said it all. She actually watched me shoot part of a song for Fanney Khan. So when she heard there was going to be a screening, she expressed her wish to watch the film with all her friends and their parents. So all her friends came with their parents, and they had a good time. I was happy to let Fanney Khan be the first film that Aaradhya watched. It has a positive message for viewers of all ages,” the actress says.

Whenever Aaradhya steps out of the house, it’s in the company of family members. A nanny is nowhere to be seen. Are the parents doing it all themselves?

“Aaradhya does have a nanny. In fact, I am told I should have two nannies because the one I have tends to take off on long-ish holidays. But it doesn’t really matter. I like doing things for Aaradhya myself, though with my schedule that’s not always possible. Today, for example, I have to catch a flight to attend a family event. I’ve dropped Aaradhya at school, and she will be picked up by my mother,” Aishwarya says.

The hands-on mother adds that she’s currently looking at doing only a few handpicked roles, like the one in Karan Johar’s Ae Dil Hai Mushkil, and now this one in Fanney Khan. “I always knew my role in Fanney Khan was a small one. But when Rakeysh Mehra and his wife Bharati narrated the story to me, I loved it.”

“Once I was on board, I became totally involved with the development of the character, her relationship with the character played by Rajkummar Rao, her clothes, the song. I loved the concept. And Anil Kapoor as a father brought his own emotions to the part. He was so sincere,” she adds.

Producer Rakeysh Mehra also believes that the actress has contributed a lot to the film, and her character. “It was a small but pivotal role. I don’t think of my roles in terms of footage. But now, Rakeysh needs to do a full-fledged film with me,” Aishwarya says, laughing.