A generational leap in cinema

Film director Saket Chaudhary thinks that one of the reasons is that there are a lot of senior actors who have a huge star appeal. 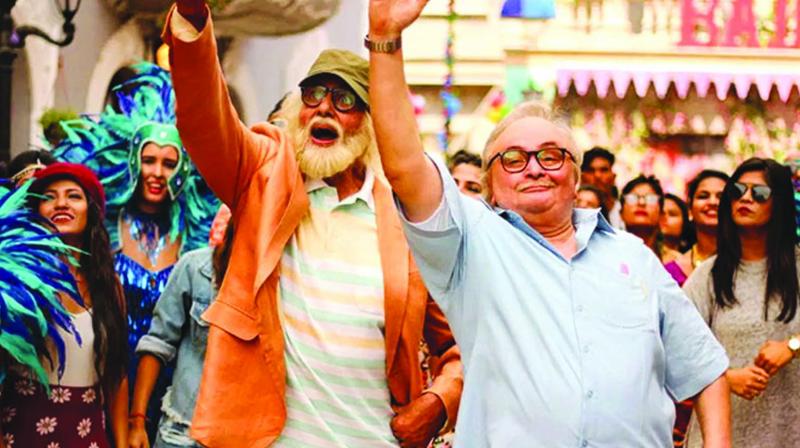 B-town Films focused mostly on the youth but have lately shifted attention to the elderly. We find out if the trend is going to continue or fizzle out.

Youth in all its romance and angst, rivalries, relationship dynamics, destiny and grit — that’s the stuff of films, generally. Rarely does the plot dare to move beyond that first flush of youth to explore lives of people of a certain vintage. But there’s a wealth of stories in those winter years of life. A few recent attempts at narrating such stories have won appreciation and proved the power of a story is not limited to the gloss of youth.

Some of the latest examples  102 Not Out features a father-son duo, 102 and 75, and how age does not dent one’s zest for life. The popular Netflix movie Our Souls At Night captured the love and chemistry between two people who are on the other side of 70. We talk to people from the film fraternity about their views on this new trend.

Film director Saket Chaudhary thinks that one of the reasons is that there are a lot of senior actors  who have a huge star appeal. “You have actors like Ami-tabh Bachc-han, Anil Kapoor, Shah Rukh Khan and Irrfan Khan whom the audiences love. So, it’s possible to make films with them. In the film business, along with coming up with a film idea, you also have to know if your story idea can be cast. Because these actors exist, and the possibility of making such films is higher,” he says.

He adds, “Another reason is because a lot of the middle-aged audiences are going to theatres to watch films. Earlier, only young people would go to the theatre. So, films with actors of different age groups appeal to them.”

However, actor Neeraj Kabi doesn’t agree. “I don’t think it’s about that, I think every director is now attempting change. Every director is now becoming slightly more daring than he was earlier. You can see this trend coming to fore in the last two years in cinema. People are not following set formats anymore. They are becoming more courageous with ways of storytelling. That’s the change. I don’t think the change is working with people who are past their prime. The idea I think is that people in the industry are willing to explore and work on various subjects that are not common,” he says.

He also thinks that the audiences are going for these kinds of movies because they haven’t seen something like this before. “They are looking for a change, I think, that is because somewhere there has been stagnation in the way we’ve been telling our stories. Amazing changes are happening right now,” adds Neeraj.

Whilst the young stars are popular, people are looking for a deeper meaning and such movies are doing well. The response speaks for itself, as the audience seems to be interested in this new concept.

“I am very happy that this trend has started. In a broader sense, the youth are obviously part of the society but so are older people. I feel that the fact of the matter is that versatility has begun. This is a wonderful thing that the focus is also on the older people and the new ideas and concepts have begun. This is a major sign of respect to society as a whole,” says actor Ila Arun.

On the other hand Sahil Verma, from The Viral Fever says, “I don’t agree that only youth-oriented movies have been made. There have been movies made on old people as well, for example, Piku, Baghban and quite a few good ones. Movies like Chillar Party focused on an animal and did well. There has been versatility in the industry. Web shows and the Internet are full of the youth, I agree. I liked the movie 102 Not Out as it portrayed a wonderful bond between a father and son. Rang De Basanti was a youth oriented movie and like the crux of every youth based movie it had fresh ideas to it. Baghban was based on old people as well.”

He believes that it is not a sudden change in perspective, and movies on old people have been made before. “I think youth oriented movies were only given slightly more attention, than the movies on elders. Personally I love family drama films rather than the usual stuff,” he signs off.
—With inputs from Cherylann Mollan