Both of A R Rahman's daughters, Raheema Rahman and Khatija Rahman, are musicians 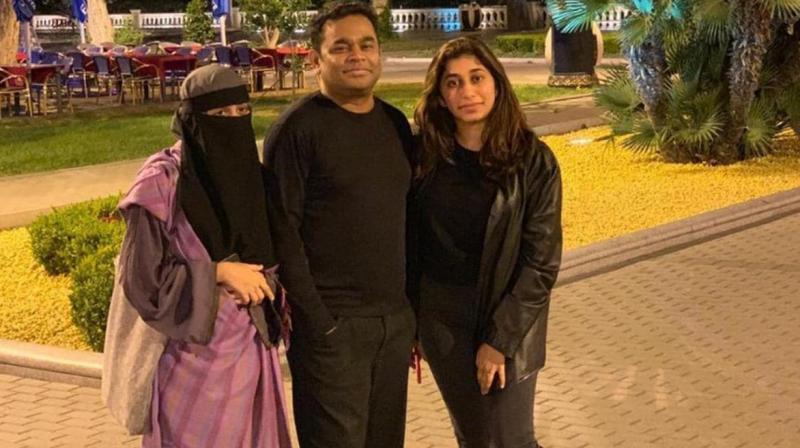 A R Rahman with his daughters, Raheema Rahman and Khatija Rahman. (Photo: Instagram)

New Delhi: There is no better feeling for parents to see their children growing up and working hard for their dreams. Music maestro A.R. Rahman could easily relate to this as his daughters Raheema Rahman and Khatija Rahman are proudly following his legacy.

Both Raheema and Khatija are musicians. They have even performed along with their father during the U2 concert in Mumbai in 2019. The two young girls also enjoy a huge fan following on social media. Khatija's latest song 'Rock A Bye Baby' from the Netflix film 'Mimi' was appreciated by many.

Speaking about his talented daughters, A.R. Rahman told ANI, "They (Raheema and Khatija) have the toughest mindsets. Anything they do, they feel like they have to be good enough...all these things come to their mind. So I keep telling them not to be worried about anything, just do it, just do the stuff and then you will have your own personality...God will bless you and nobody is going to compare them."

Not only his daughters but A.R Rahman has also been guiding many other young talents for a while now -- especially through his institution KM Music Conservatory and BAFTA Breakthrough India Initiative, which identifies, celebrates and supports talents working in films, games, or TV.

According to him, it's his duty to give back something valuable to the society.

"It's the natural human tendency...when you are growing up, you go to a well and you take water from it and when you actually become a grown-up, you realise that it's your time to create a well so that the next generation can pick up water from there...through that you get more happiness. I always feel what you give is yours and what you take is not yours," the Oscar-winner emphasised.

"When I was young I have worked with a lot of older people. I was 12-13 when I went to the studio for the first time and saw people beyond my 30s, 50s, 60s and 70s...I was the youngest person and what I learned from them is commitment, professionalism and art. Now, I am doing the reverse. Young people's spark, enthusiasm and energy motivate me. I am reliving the youth while working with young talent," he ecstatically expressed.