Mahie Gill reveals about her live-in boyfriend and daughter 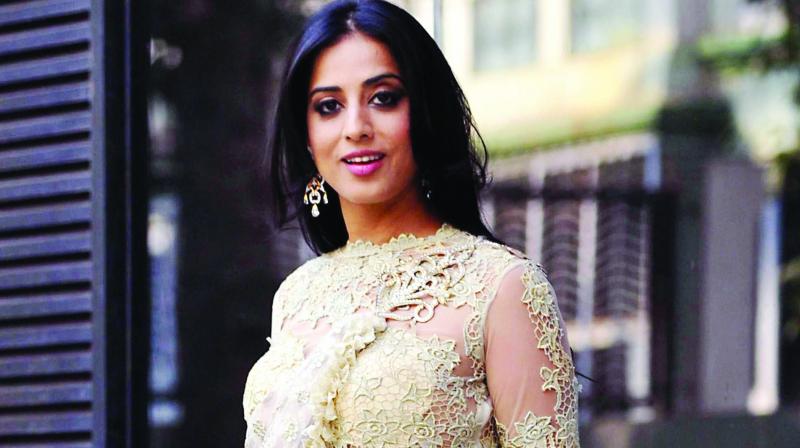 Mumbai: Mahie Gill who is best known for her roles played in DevD as Paro.She won critics award for having played this character energetically. Mahie’s professional life is known to everyone. But her personal life is not known much. Presently Mahie confirms having a boyfriend. And also has a 2 and half year old daughter named, "Veronica". One thing is not clear whether this baby Veronica is an adopted child? Mahie spoke about her boy friend and daughter Veronica, but did not make it clear if she has adopted Veronica?

Undeniably, having gained recognition  after portraying Madhavi Devi, a sexually frustrated wife in Saheb Biwi Aur Gangster …and Gangster returns there is going to be a fourth  part of the sequel as well confirms Mahie Gill during the promotional activities of her forthcoming film 'Family of Thakurganj'…She further added,” Director/Producer of , ’Saheb Biwi Gangster” none other than Tigmanshu Dhulia along with Mahi Gill and others was assaulted recently while shooting for ,’ Alt Balaji’s ,’Fixer’ while both Tigmanshu and Mahie  were performing together revealing a secret   she confirms,’ Tigmanshu Dhulia was shooting on the sets he is a co actorin this film, ’ Family of Thakurganj …He is acting in the film. During our leisure time we were discussing about,’Saheb Biwi Gangster’ He was just telling me that he will make the part 4 Franchise of,’ SBAG.’  Also was discussing as to why third part didn't work. So while discussing about SBAG PART 4 , I was very happy, simply, because I too will be doing something different bringing something new in the ,’ SBAG” part 4 franchise .”

Mahi’s poster of this film Family Of Thakurganj with her reel brother in law and reel mother in law seemed to be as if Mahi is having an extra martial affair with him so we quiz if she is again having a triangular love story in the film? It's about relationships respect it’s a beautiful relationship with mother in law, husband, Devar and child. Its interesting relationship She is Dabanng but outside the house. In the house she gives great respect to her relationships and has great bonding with the family.”

About the feel of Extra marital affair she elaborates,’ This is the first film where I and Jimmy Shergill are married in a proper manner .This time there is no extra martial affair to play for me[laughs]  no nothing of that sorts…this poster with my brother in law[devar]…makes everyone feel that And also my reel image is such, that whenever people see me in a film they feel I will be having a triangular relationship.’

So what’s her take on [real] relationships we ask? It all depends. One needs to compromise to set it right. You have to ignore a lot of things. You have just one life you have to try to keep the family as one united family. It’s important that you should try to build relationship…as we all know building relationship takes time. But it may break in no time.

Talking about compromises, does she compromise all the time in a relationship? No doubt we need to compromise. About having lot of compromises, it’s a proven fact that we are all different people we are not the same we have to let go  a few, not so great negative incidents  in a relationship to be able to continue with it. We can’t keep holding to grudges. My family lives abroad. I see people meeting their families and I miss that. I am person who will  never let go my freedom’ For me freedom is very important I never compromise in any relationship when it comes to  my freedom, As a human being we all need a free space to exist .Also do what we like to do. I can never compromise with freedom.

"Being the right opportunity we instantly ask about her frequent visits to Goa and her personal life which she has always been tight lipped about?? She laughs aloud and says, "Aap bhi chalo mere sath  Goa ghumne." [You also accompany me to Goa for a rendezvous]]

Adding more she clarifies, "I have boy friend. He is not a catholic. He is a business man.”

Not married and having a boy friend we ask what exactly she is up to ? She aptly replies, "We have to get married…koi frk nahi pdta koi [it makes no difference] We have no pressures to succumb too. I already commented above that I need freedom and my free space. Freedom for both of is very important. We love and respect each other. Respect needs to prevail in any relationship so that it can  be carried on and on. Yes we are sharing a live in relationship. We are yet not married, We will get married.”

Not many know that Mahi also has a daughter. Elaborating about her daughter and her special name, “Veronica” Mahil explains, "I have a daughter and she is two and half. My aunt takes care of her in Mumbai.I too live in Mumbai most of the time."

Why a Christian name Veronica? "Her name is Veronica. She lives with me. Why I named her Veronica - When Jesus was dragged on the cross and he was being taken to Jerusalem to be crucified.  A woman dared to wipe his face with her handkerchief and his image got printed on it. That woman was called Veronica. And the meaning is- She who brings victory to true image. Thus I liked the name. And named my daughter Veronica," she concludes.