Shoutout: It pays to be grateful

THE ASIAN AGE. | DR A. LALCHAND

Study shows that being consciously grateful improves our altruistic streak and could make ourselves and the world a little better. 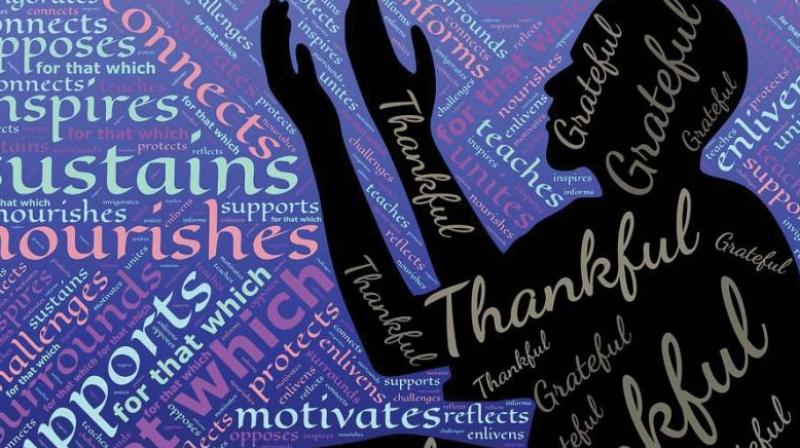 We’ve often felt tired of seeing inspirational quotes exhorting us to be grateful for all the little things in life. However, a group of researchers has literally gone into the depth of the matter, or grey matter in this case, and it seems that a few of those annoying morning WhatsApp memes may have a point, after all.

The Greater Good Science Centre at University of California, Berkeley, focuses on qualities such as happiness, compassion and gratitude and the role they play in developing a thriving, resilient and compassionate society. Researchers in the gratitude project tried to find out if gratitude, or being thankful for what we have in life, translates into a need to do good to others by “paying it forward”, a form of altruism.

As altruism can have different motives, ranging from feeling good by being observed by others while making an ‘altruistic’ choice to thinking about future benefits in exchange for what is being given, the focus of the study was on “neural-pure altruism”. This was done by observing the fMRI (functional magnetic resonance imaging) changes in an area of the brain called the ventromedial prefrontal cortex when the subjects of the study underwent a task. As part of the study, participants were made to observe money being transferred to a charity, rather than being transferred to them, mostly without them having a say where the money should be transferred.

The study attempted to test two theories: one, people who report themselves as grateful may show up as having increased altruistic traits, and two, practising gratitude increases altruism. The study subjects consisted entirely of female undergraduate students. To test the first theory, the subjects were asked to score themselves on a self-reported gratitude questionnaire, after which they were involved in the money being transferred to charity task. They were also asked to rate their satisfaction after the task.

It was found that increased levels of self-gratitude were related to increased satisfaction ratings and also to changes seen in the areas of the brain-related to altruism. For the second theory, the groups were divided into two: one which was prompted to write a daily entry in a journal about something they found to be grateful for, while the other group could write about neutral topics, without being prompted to write about gratitude specifically. After two weeks, it was found that compared to the second group, the brain areas of the first group who included gratitude in their journals showed more changes in the ventromedial prefrontal cortex, which signified an increase in the dimension of neural-pure altruism.

So, what does this mean? To slightly oversimplify, gratitude is not just about appreciation about what one has. It also has a pro-social dimension to do good for others. And more importantly, being consciously grateful also improves that altruistic streak we have. This could mean small, yet significant steps in making ourselves and the world a little better. Though not endorsing WhatsApp gyan in any way, the next time you see something about being grateful, do take a moment to say thanks — it helps!