Amidst reports of the growing plastic menace in the deep seas, this man takes it upon himself to clean them, starting from the beaches. 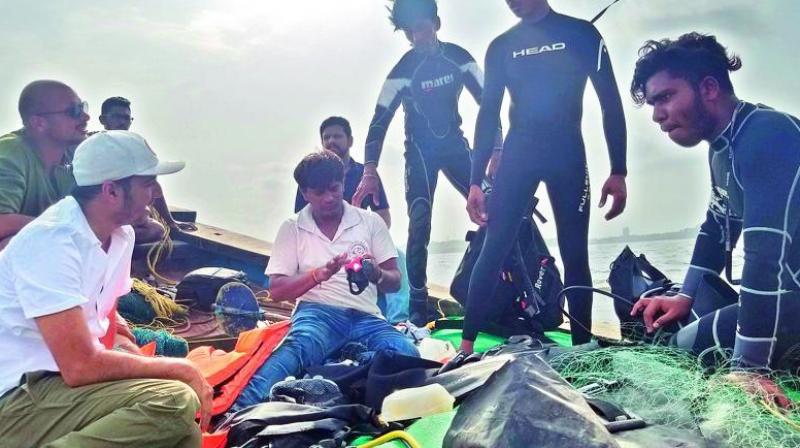 ‘Ocean Lover’ Afroz Shah talks to his team before gearing up to take the plunge into the deep blue sea.

Do you want clean beaches? Then dive into the ocean. This is the new mantra of Mumbai-based lawyer Afroz Shah, the man famous for spearheading Mumbai’s Versova beach clean-up drive. After turning the littered Versova beach into a pristine one after two years of mammoth efforts, Mr Shah has now got the support of 20 trained sea divers to pull out the plastic waste from the oceans.

Mr Shah is among ocean and nature lovers the world over who have woken up to the threat posed by plastic to oceans, marine life and to the human race.
Every year, the world uses 500 billion plastic bags and that contributes to about eight million metric tonnes of plastic that end up in the oceans. By 2050, there could be more plastic than marine life in the oceans, says a 2017 United Nations report. Soon, the food chain will have the same plastic ending up in human bellies as well.

Gigantic whales end up dead on the shores of beaches and a majority of times, the cause of their untimely deaths is swallowing pounds of plastic. A recent BBC Blue Planet II documentary series included pictures of seabirds feeding plastic to their chicks, and a huge whale with a plastic bucket stuck in its mouth. Two years ago, a pod of 13 sperm whales washed up on shore dead from ingestion of plastic waste.

Whales are noticeable for their size but there may be numerous other creatures that sink into the ocean after ingesting plastic. Some 1,00,000 marine creatures die every year from plastic entanglement and these are the ones found. Approximately 1 million sea birds also die from plastic.

It won’t be long before this plastic waste comes back to bite us humans. “The ocean has been telling us in every possible way to remove plastic from its depths before it is too late,” says Afroz Shah, who was awarded the Champions of the Earth award by the UN for his efforts to clean Versova beach.

His fear is not without reason. A study called, ‘Human footprint in the abyss: 30 year records of deep-sea plastic debris’, which will be published soon by the journal Marine Policy, found a plastic bag nearly 36,000 feet below the surface in the Mariana Trench, which is the ocean’s deepest spot.

Afroz Shah, who is now 37, started his journey of beach cleaning in 2015 along with his 84-year-old neighbour Harbansh Mathur, who has since passed away.
Through his initiative, which he calls ‘Date With The Ocean’, he has inspired thousands of volunteers to join him in cleaning the beach every Sunday for the last three years, including film stars, cricketers, businessmen and even politicians.

The volunteers have collected millions of kg of waste from the 2.5-km beach. Now, the man wants to start cleaning the ocean. The problem of marine debris caught his eye long ago. Marine debris can be simple items such as discarded cans, cigarette butts, or plastic bags that end up in the ocean potentially harming marine life. It goes into the ocean gyres (a gyre is any large system of rotating ocean currents) pushing the debris deep in the ocean.

“Ever since I shifted to a new apartment in Versova, my plan was to do something for the beach and then move to the ocean. If the plastic is not recycled, it goes straight into the gyres and further into the ocean. The plastic goes right inside the ocean through the gyres. It was my plan to move to oceans. It is one step at a time and oceans are our next step. We will start the process fully once the rains get over,” he says.

The whole of last week from May 21 to 26, four divers from Sindhudurg district in Maharashtra, dropped deep into the ocean to clean the core. While this was just a check-up, the ocean cleaning will begin once the monsoons end, informs Shah. “I will be fooling myself if I say I can eradicate all of the plastic from the ocean. But I am going to do the most I can,” he says.