Governments’ focus on GDP growth alone ignoring other incidators could result into a popular backlash. 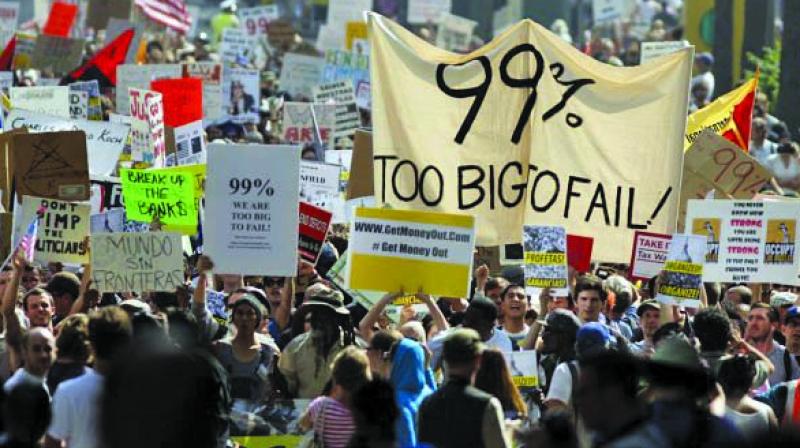 A file photo of people demonstrating against government policies that favour one per cent rich.

Until the 17th century, India and China vied for the tag of the world’s richest country. After four intervening centuries of colonial subjugation, both these eastern civilisations are in a race to reclaim their lost economic glory. The measure that indicates their success is growth in Gross Domestic Product or the total economic activity in the country.

Ever since Russian-American economist and Nobel laureate Simon Smith Kuznets developed and propounded the modern concept of Gross Domestic Product for a US Congress report in 1934, GDP growth has become the ultimate indicator of economic prosperity for governments across the world. Policies are tuned to promote faster GDP growth. Growth in GDP has become synonymous with people’s welfare, though this is contrary to the intent of its developer.

“Distinctions must be kept in mind between quantity and quality of growth, between costs and returns, and between the short and long run. Goals for more growth should specify more growth of what and for what,” Kuznets said in 1962.

According to one school of thought, GDP has several limitations in measuring economic and social progress of people, as it does not give a correct micro level picture. The basic premise of this argument is the fact that a majority of people of a rich country do not essentially have to be rich. There could be skewed and unequal distribution of wealth.

India, according to the New World Wealth report, is the sixth wealthiest country in the world with a total wealth of $8,260 billion, trailing behind only the United States, China, Japan, Germany and Britain. By this logic, all Indians should be living a life that is better than the life people in France and Canada live, since these nations rank below India. Alas, that is not the reality. The reason is unequal distribution of wealth.

A perusal of Forbes richest list 2017 shows that the top 100 richest in India own wealth worth $479 billion. To put it in perspective, this means 0.0000083 per cent of the Indian population owns over five per cent of its wealth.

The GDP data, however, is ill-representative of people’s welfare. When the GDP concept was first framed by English economist Sir William Petty in 1695, economies were fairly dependent on labour. The turnover of a business was a factor of labour. The obvious corollary is that a well-run business would transfer wealth to a proportionate number of workers. By this logic, if GDP increased, more number of people were employed, leading to transfer of proportionate wealth.

An example could illustrate this argument better. India and China were the richest regions in the world till industrialisation changed the way factories were run. The secret of their wealth was a preponderance skilled people — India and China were the most populous regions. Since there were no machines available in those days, a country’s economic activity could be reflective of people’s prosperity (excluding cases of slavery and other non-financial relationships between employee and employer). In such scenarios, GDP growth could have given the true picture of people’s welfare.

As technology developed, the output of a factory or a service provider got delinked from the number of people employed. In the current scenario, a company with 20 people can generate business of several billion dollars. Though this is reflected in GDP, it might not benefit more than a couple of hundred people even if we take into account its potential for indirect employment (excluding benefits of taxes by the company). This mismatch makes GDP growth figures useless for governments in countries which have large populations of poor people.

Nevertheless, governments the world over have been pursuing policies unmindful of the importance of other indices and indicators. This has resulted in a popular backlash evident in the many protest demonstrations. The sentiment among the poor is gradually turning against the 1% rich.

Both the pro-economic growth and the pro-welfare camps, therefore, have valid arguments. Neither group can survive without the other. Without people, companies have no reason to exist. Similarly, without entrepreneurs, people will find no jobs. So it is high time that economists devise a model that combines the data from economic growth and social development indicators, to present a holistic outlook of a country.