Book Review | A laugh riot that smells like teen spirit! 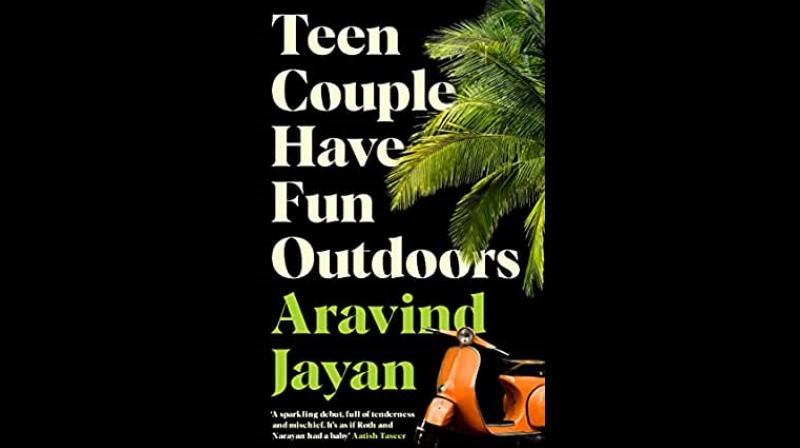 Coverpage of 'Teen Couple Have Fun Outdoors'. (Image By Arrangement)

All hell breaks loose in a middle class household in Trivandrum when, as the title says, ‘teen couple have fun outdoors’. Twenty two-year-old Sreenath discovers that he and his girlfriend Anita were secretly filmed making out, the video is a hit online, and locks himself in his bedroom pleading a headache. His younger brother is initially flummoxed when friends in the neighbourhood sympathetically ask how his brother is doing. He has no idea that his entire family will soon have a bigger headache than Sreenath!

As the video goes viral, Sreenath’s parents find out too via neighbours/acquaintances/relatives. Sreenath spiritedly defends himself and tells his father, “Why should I be ashamed? I’m not ashamed, I didn’t rape anyone or steal anything. You can all go to hell.”

A family friend clucks and asks his mother if there were “any signs”, and Sreenath’s brother thinks, “How could there be signs for something like this? It’s not like Sreenath had run away to join Al-Qaeda, that you could have caught him signing up for flying lessons one day and Googling tall buildings the next.”

Sreenath is kicked out of the house for bringing “shame” on the family. His father even stops paying his CA fees. The cyber crime branch of the police is unable to stop the circulation — why, by the time the book ends, this video has got over 400,000 views!

Fortunately, super cool Sreenath lands on his feet through the kindness of his equally cool friends. His brother’s efforts at playing the intermediary are largely unsuccessful. No matter how hard he tries to make Sreenath see it from his parents’ point of view, a defiant Sreenath is not buying it.

Things come to a head again when Anita’s family finds out about the video, and Anita is thrown out of her house too. While her mother doesn’t want to talk to her, she gets an uncle-type mediator on Anita’s case. They insist that marriage is the only way to undo the damage, and practically haunt Sreenath’s parents because their son was at fault so they have to fix it. Sreenath and Anita flatly refuse to marry — they are determined to cock a snook at this small minded society, and you have absolutely got to admire them for it! Sreenath even suggests that perhaps Anita’s parents will “go full right-wing and beat up couples on Valentine’s Day.”

Things hit another climax when the video gets a fresh lease of life in another format — created by Sreenath and Anita themselves! By this time, Sreenath and Anita have left Trivandrum, the narrator is going through his own personal crisis, and is not playing “middleman” anymore.

While the subject matter may be heavy (it’s like a sledgehammer to Indian society!) the style is light and engaging, and the book will make you laugh from start to finish. You may even fall off your bed/chair at the wry wit. This is a brilliant debut novel that will get you begging for more from Aravind Jayan.