A call to arms for Gandhi’s Hindus

As time moves forward, Hindu Rashtra will take its rightful place as a well-researched attempt to explain the unfolding of the Modi years. 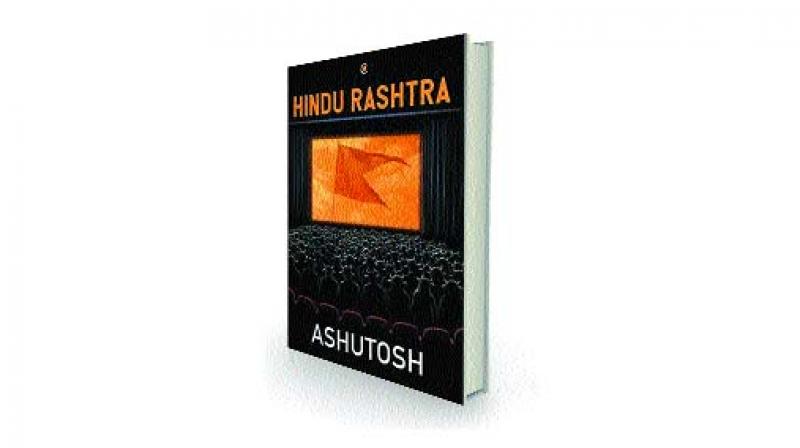 Although the publication of this book by the renowned media commentator and former Aam Aadmi Party leader, Ashutosh, has been timed with the commencement of the 2019 general elections, it would be a mistake to dismiss it as an election rant. So much serious research has gone into it that it will outlast the outcome of these polls.

As time moves forward, Hindu Rashtra will take its rightful place as a well-researched attempt to explain the unfolding of the Modi years from the perspective of the evolution of the ideology of Hindutva which in turn has spanned over close to a full century. It will also claim its recognition as an analysis of the first effective display of Hindutva in the governance of this country that took place over the last five years. Because the scholarship is conveyed in true journalistic style by a professional, the book combines profound research insights with very readable prose.

Ashutosh takes the reader by the hand, as it were, through the beginnings of Hindutva: the invention of this hitherto unknown word by V.D. Savarkar, its elaboration by M.S. Golwalkar, and its being put into political practice by the current icon of “masculine and martial nationalism”, Prime Minister Narendra Modi.

“Hindutva,” the author observes, “has an infinite appetite to quarrel with the past”. The past is seen, in Savarkar’s words, as “millions of Muslim invaders from all over Asia (falling) over India century after century with all the ferocity at their command to destroy the Hindu religion, the lifeblood of the nation”. Savarkar held that in this the Muslim invaders succeeded only because the Hindus had become “weak and cowardly” by upholding the “perverted virtues” of “compassion, tolerance, non-violence and truth”. The answer lay in recasting the Hindu as “masculine and martial”, the very qualities that Mr Modi seeks to embody. Ashutosh continues: “Modi epitomises Hindutva nationalism, which is founded on an adversarial attitude towards Muslims and believes that India’s history is one of Hindus being tortured in their own homeland for thousands of years because of the ruthlessness of Muslim rulers”.

But why continue this quarrel with the past even unto the 21st century, well after India, albeit a partitioned India, gained her Independence? M.K. Gandhi laid down the fundamental parameter of our contemporary nationhood in the following terms: “The assumption that India has now become the land of the Hindus is erroneous. India belongs to all who live here”.

Golwalkar held in direct contrast that the coming into being of Pakistan “is a clear case of continued Muslim aggression”. This led Nathuram Godse to justify assassinating Gandhi as, “Gandhiji was himself the greatest supporter and advocate of Pakistan… In these circumstances, the only effective remedy to relieve the Hindus from the Muslim atrocities was, to my mind, to remove Gandhiji from this world.”

This meshes seamlessly, as cited by Ashutosh, with Vinay Katiyar, several times BJP MP from Faizabad, asserting in an NDTV interview on February 7, 2018: “Muslims should not stay in this country. They have partitioned the country. So why are they here? They should go to Bangladesh or Pakistan. They have no business being here in India”. And that explains the conflation of “Kashmir, Pakistan and Islam” which Hindutva enjoins as “the duty of every Indian to fight”.

It is from such beliefs, argues Ashutosh, that have arisen the horrors of lynching and murder in the name of gau raksha and “love jihad”, assault and assassination of “anti-nationals”, the undermining of the institutions of democracy, and the nurturing of a new breed of “right-wing television channels that have become platforms for the propagation of Hindutva ideology: muscular nationalism; warmongering; militarism; bashing of Islam, Kashmir and Pakistan; and ridiculing and condemning liberal and secular values”.

The writer goes into each of these, and more, linking them to the ideology that inspires such hate and prejudice. The basic dream of Hindutvavadis, he shows, is “to make Hindus ruthless and masculine as they assume Islam did to its followers” by “effectively us(ing) state power to spread religion”.

Concisely but without missing out on the excruciating details, Ashutosh summarily recounts the horror stories of “Akhlaq, Pehlu Khan, Junaid” and numerous other innocent Muslim citizens of this country who lost their lives to howling mobs and the mildest of reprimands from the “Hindu Hriday Samrat” who, through his oratory and actions (and, most significant of all, his calculated silence) unleashed the forces that committed these crimes. Mr Modi is “a polarising figure who unabashedly pursue(s) Hindutva and (does) not hide his views vis-a-vis minorities. His image as a Hindutva icon (is) one of the major reasons for his success. He could succeed only because… prejudice against Muslims has been lying dormant in a section of Hindus for long”.

Ashutosh goes on: “Flaunting an anti-Muslim attitude is definitely (and) massively on the rise. The stereotyping of Muslims has increased manifold”.

To prove the point, he quotes a series of Modi bhakts, from unknown characters like Prashant P. Umrao, who “is very active on Twitter” to the more prominent Mahesh Sharma, Sangeet Som, and Sanjay Baliyan, culminating in the instance of Anant Kumar Hegde, one of Mr Modi’s ministers of state, thundering at a public meeting: “Till the time Islam exists in the world, no one can stop terrorism… we should throw Islam away from this world, we should shut Islam”. Yogi Adityanath, of course, takes up lots of space.

Ashutosh deftly contrasts these examples with Gandhi and Jawaharlal Nehru nipping communalism in its ideological bud, during crises worse than this one. “Hinduism,” said Gandhi, “tells everyone to worship God according to his own faith or dharma, and so it lives at peace with all religions”. As early as his publication of Hind Swaraj (1909), he had urged, “Religions are different paths to the same venue. We can both take two different paths, what is wrong with it? What is the fight?” And later, in his Hindu Dharma, he “advised every Hindu to place his full trust in his Muslim brethren”, adding, “It is the duty of every Hindu to help (the) Muslim”. He went on to argue in the same book, quotes Ashutosh, that “India’s good lay in the unity of heart between Hindus and Muslims”, adding that, “three-fourths of India can never enjoy freedom if they remain hostile to the remaining one-fourth”.

Savarkar had countered Gandhi, arguing that: “it was this confused religious thought, the distorted sense of virtues and the blind religious tolerance which culminated in the religious suicide of the Hindus.” Savarkar deplored the view that “more respectable than truthful conduct was considered non-violence as the highest form of virtue”, that it was this “which later on hastened our terrible downfall.” What Savarkar most regretted was that “manliness and valour came to be condemned as the vilest vices”.

Golwalkar added, “The thinking in our country during the last few decades (that is, the years of Gandhi’s ascendance) has been on looking down upon strength as something sinful and reprehensible”. The RSS guruji chillingly concluded: “A dense cloud of dust is raised in the form of high-sounding words like ‘peace’ and ‘non-violence’ with an assumed air of moral authority only to cover up our imbecility”. It is ideological thinking of this order that has set Mr Modi’s Hindutvawadis on the path of displaying their “manliness” and “valour” by setting on hapless Muslims.

The other bête noir of Mr Modi and the Hindutvavadis is Nehru, dead for nearly 55 years yet attacked in election rally after election rally as if he were the principal opponent. As Ashutosh argues, Nehru is the target because Gandhi “anointed” him his successor.  And so, “as is said in the game of chess, to kill the king, first target the knight. Nehru is that knight through which the legacy of Gandhi is being targeted”.

The author cites Congressman Rafiq Zakaria recalling Nehru’s address to a Muslim audience in words that have always been anathema to the Hindutvavadis: “You are Muslims and I am a Hindu. We may adhere to different faiths or even to none, but that does not take away from that cultural inheritance that is yours as well as mine. The past holds us together, why should the present or the future divide us in spirit?”

Mr Modi’s five years have seen the “unfolding of a new agenda — dismantling the establishment, superimposing an ideology, restructuring the aspirations of the people”. But “to become a Hindu Rashtra, India has to become an ideological state. Till now, we have only seen a mere glimpse of what that may entail”. Yet, as that is the ultimate goal of Hindutva, this is what makes the 2019 Lok Sabha election the “decisive battle”. “This battle,” says the author, “is between Gandhi’s Hindus and Hindutvavadis”.

A more timely call to arms would be difficult to envisage.

Mani Shankar Aiyar is a former Indian diplomat and a member of the Indian National Congress Party.