You are responsible for your worldview, keep it simple

The pieces in Mouth Full of Blood are categorised into three parts: the political, Black matters, and Morrison on her books. 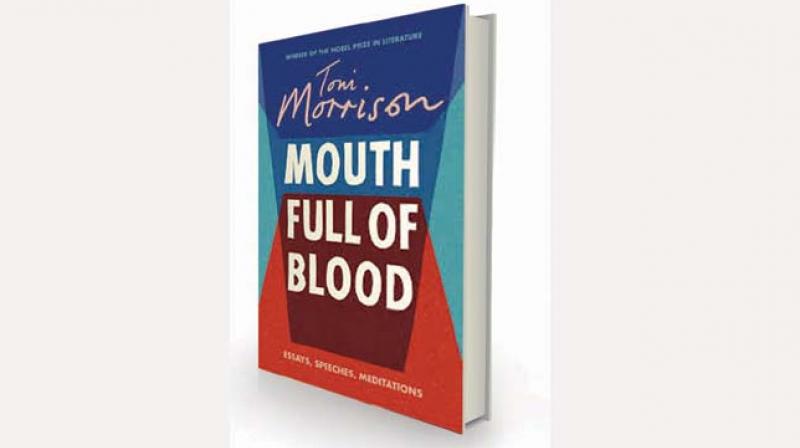 To read Toni Morrison’s Mouth Full of Blood: Essays, Speeches, Meditations, and then to even attempt to review it, seems like madness. Morrison, after all, is an important writer, a Nobel Prize winner, acknowledged as a person who sees what others don’t and so opens the eyes of the world. Reviewing a collection of more than 30 years of her thoughts on everything from racism to aspirations to money to the search for the perfect word with which to end a book is futile. Why should you, the reader, want to read an effusion of praise about a book when you can actually read the book instead?

So I’m not going to even try and review the book. Instead, I'm going to tell you exactly why, even if you’ve never read anything Morrison has ever written before, even if you find the thought of reading a Nobel Prize winner intimidating, even if you prefer light reading to anything that stirs up emotions you don’t want to feel and don’t know what to do with, you should have this book in your home. Because this sounds contradictory, but it’s true: while Morrison’s thoughts have the power to make you twitchy and uncomfortable, they also have the potential to declutter your mind.

The pieces in Mouth Full of Blood are categorised into three parts: the political, Black matters, and Morrison on her books. The political, as you can imagine during this heart-stopping election between the humanists and the fascists of India, totally grabbed me. American writer Morrison focuses pretty much only on the US, but right wingers, injustices, stereotypes, discrimination of all kinds, exist all over the world, and it is incredibly easy to see in her writings a reflection of India today as well.

Every one of the pieces in the political section of the book resonated with me, but I’d like to mention three in particular that reached right into my soul. Read one after the other as I did serendipitously, having decided to read this book at random rather than in order of chapters, “The Foreigner’s Home”, “Moral Inhabitants” and “Sarah Lawrence Commencement Address” lay out the dilemmas that face the non-right wing elements among us, the realisation of what exactly we are in the world, and the deep belief in a solution that arises directly from that realisation.

“The Foreigner's Home”, as the title suggests, is about migration and the meaning of “home”. “…how do we decide where we belong,” Morrison asks. “What convinces us that we do? Or put another way, what is the matter with foreignness?”

All three are questions I would really love to ask the right wingers among us, those jingoistic “nationalists” who exhort everyone who fails to agree with their views to “go to Pakistan”. Morrison explores these questions via her comments on a Ghanaian novel written by Camara Laye, which takes the “White Man Enters The Heart Of Darkness” trope that is so prevalent in western attitudes to African countries (and all developing nations, really), and turns it on its head. It’s an eye-opening piece that showed me how much I accept of the world around me without thinking about it, how intellectually lazy so many of us can be.

“Moral Inhabitants”, on the other hand, shows the tendency of powerful human beings to regard more vulnerable human beings as commodities rather than as human beings. The source of this tendency, Morrison says, “…is a deplorable inability to project, to become the ‘other’, to imagine her or him. It is an intellectual flaw, a shortening of the imagination.”

There’s that intellectual laziness again, and I totally agree with her when she goes on: “We judge an intellect by the ease with which it can tell the difference between one molecule and another… between mauve and orchid… between the words ‘wrest’ and ‘pry’… between Chanel No. 5 and Chanel No. 19. It would seem, then, to that to continue to see any race of people as one single personality is an ignorance so vast, a perception so blunted, an imagination so bleak that no nuance, no subtlety, no difference among them shall penetrate.”

I wielded my yellow highlighter liberally while reading the two pieces I've brought to your attention above. But after I finished “Sarah Lawrence Commencement Address”, I had to actually buy another highlighter because the first one went dry.

As the title suggests, this piece is Morrison’s speech to the graduating students of Sarah Lawrence College in the US, delivered in 1988 — nearly 30 years ago. As with any speech aimed at young people, it’s about how, in the speaker's opinion, they should approach adulthood. I’m very far from being a young person, but less than a page into this piece, I realised I needed this. I needed to know that cynicism gets me nowhere, that exhaustion can’t overpower my convictions, and that dreams can lead to change. “Don’t let anybody, anybody, convince you this is the way the world is and therefore must be,” Morrison told the students. “It must be the way it ought to be.”

There’s so much more from this book that I want to present to you as evidence that you should read it, but to do that, I’d need to write a whole book. So here’s my last word on it: think of Mouth Full of Blood as a kind of Marie Kondo for your soul. It may hurt while you question why you want to keep that old belief when it’s a fact that you’ll never fit it no matter how much you exercise your mind and starve your brain, but at the end, you'll feel much lighter for having got rid of it.