Books   20 Apr 2018  A must-read for decision-makers, this book is sure to fascinate all
Books

A must-read for decision-makers, this book is sure to fascinate all

This book is an account of Major Johorey’s extraordinary journey of service life, which inspired Gen. Banerjee, to record it... 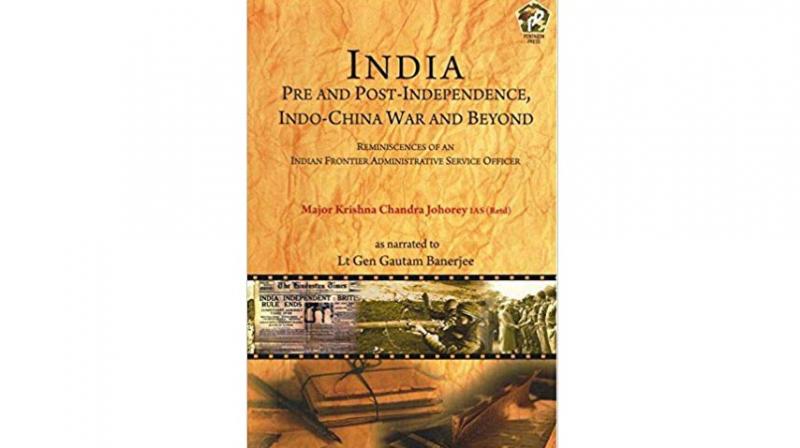 First and foremost, the author deserves a thumping commendation for undertaking  this book even as he approaches his mid-nineties. And further, he needs to be thanked for throwing light on a crucial period of India’s post-Independence developments related to Tibet and its usurper, China, which to say the least continues to be India’s large hegemonic and troublesome neighbour .

This book is an account of Major Johorey’s extraordinary journey of service life, which inspired his younger fellow Bengal Sapper, General Banerjee, to record it in the form of this book. Staying clear of personal matters, this book is a narrative of public events involving Major Johorey spanning the period of the late 1930s to mid-1980s. The book also reveals many other interesting and not very widely known aspects and drawbacks of India’s administration of its remote regions. And, unfortunately, this remoteness continued in the minds of India’s planners and decision makers for far too long — well over 60 years since Independence-till the UPA government was shaken into kick-starting some fast track infrastructure development programme in Arunachal Pradesh, which China claims as its own territory-or rather-part of the Tibet that it swallowed in the 1950s.

Standing tall and impeccably dressed to date, Major  Johorey began his professional career in the Army’s Corps of Engineers. Serving in the Northeastern region, he also became an active mountaineer. Post Independence the Brit majority in the Indian Civil Service went home and with hardly any being available and the Indian Political Service officers considered suitable for frontier service also getting reduced to very few Indians, a call was sent to the Army, Navy and Air Force for volunteers to be selected as frontier administrative officers, Major Johorey was one of them who was selected for the erstwhile Indian Frontier Administrative Service (IFAS). That is how he landed in NEFA (North East Frontier Agency) and thereafter came diplomatic assignments in Tibet and Afghanistan, and top civil service assignments in Goa and Delhi Administration.

Major Johorey recalls the then Prime Minister Jawaharlal Nehru telling the officers selected for IFAS: “The staff must go along with the flag and the typewriters can follow later on. That is it, physically and literally.” Johorey recounts how the first batch of 14 officers received some training and proceeded to Shillong where they were briefed by the governor, the  chief minister of Assam and heads of various departments.  Johorey and two if his colleagues had been had been given the charge to “administrate”  the Siang Frontier Division with Along as a base. The description of journeying to their jobs is amazing. Landing at Rowria airfield in Jorhat, Assam, they had to wait because they could not walk to Along as there were no roads. The Brahmaputra River had eroded the banks and damaged all the approaches. There was no bridge on the Brahmaputra at that time and you could not even go by ferry boat to Pasighat. Later, a doctor was appointed and joined the three officers. There were two houses, one for the “burra sahib” (big boss), and another smaller hut. The houses were really huts made of bamboos, palm leaves and canes. Even the tables and the beds were of bamboos. There were no mattresses, no electricity and no furniture. The only consolation was that the  houses were “very clean and air”. For food, they depended on the airdrop from a small airfield used as a dropping zone. That is how the IFAS started. Earlier, officers had been headquartered in Dibrugarh or Pasighat and they only occasionally visited Along and some more remote parts of the Siang Frontier Division (today under Upper Siang), and West Siang districts of Arunachal Pradesh. Pasighat was then a five-day journey by mule track. Some of the villages were very   new and no administration had ever gone there. They had never seen a coin. They had no medicines. The new administrators had a small protective escort of the Assam Rifles, the first classic paramilitary force.. In each NEFA district headquarters, Assam Rifles, then under the ministry of external affairs, had the responsibility to guard the government treasuries. Then, there was a major problem of distribution of salt. Earlier the tribal population had to walk for weeks to reach Tibet to get salt. Sometimes, tribals visited the plains of Assam to barter goods. Such were the early days of the IFAS. While so much has happened since those days when Maj Johorey was in Tibet and his colleague Major Relangnao “Bob” Khating hoisted the Tricolour at Tawang that affects China-Indian-Tibet relations till date, the great irony is that not much is known, thanks to the Nehruvian philosophy of keeping the public and even those in the government uninformed. One way of doing it is by continuing to keep documents classified, while another is to make them disappear. While even UK has declassified much of its old archives, including those revealing its plan to partition India and Pakistan, in India, for 70 years now, much of important history has been kept under wraps purportedly for operational  security, but actually to hide the failings of government/politico-bureaucratic combo. Major Johorey admitted that some of his own notes could not be accessed.

Claude Arpi, an expert on Tibet/China/India, has been outspoken in his criticism of the Indian establishment’s info-hoarding compulsions. Speaking to this writer he reiterated from one of his articles co-authored with Subroto Roy, “Hiding History from People” (Business Standard, January 29, 2013) “a ruling political party or self-styled elite or “nomenclatura” keep publicly important information to themselves, and do not allow the ordinary citizen easy or reasonably free access to it. And only the elite “nomenclatura” is in a position to use the information to serve the national interest... though the suppressed bad news tends to silently whisper all the way through the public consciousness in any case… The study of the subcontinent’s history using archival material is crucial to disentangle difficult problems like the Jammu and Kashmir issue or the border problem with China. Yet today nobody can access independent India’s primary sources locked in South Block and North Block in New Delhi. Most bizarrely, Jawaharlal Nehru’s papers are under control of his descendants like Priyanka Vadra and Sonia Gandhi, who claim copyright. Someone may need to tell them there is a universal principle that there can be no copyright on the public life-work of historical figures like presidents and prime ministers.”

A nation can learn valuable lessons from history. Suppressing the Henderson Brooks-Prem Bhagat report on the 1962 Sino-Indian war is counter-productive. India must muster all records/archives related to China, Tibet and India so that it can effectively put across its case, as often required in bilateral discussions.

Practitioners of political science, public administration and history and even other readers would find this book fascinating for what it reveals about events and episodes unknown so far. Decision makers must read and learn from it.