If at all you’re floundering in sadness, read To Night Owl From Dogfish. I guarantee it’ll get you laughing again. 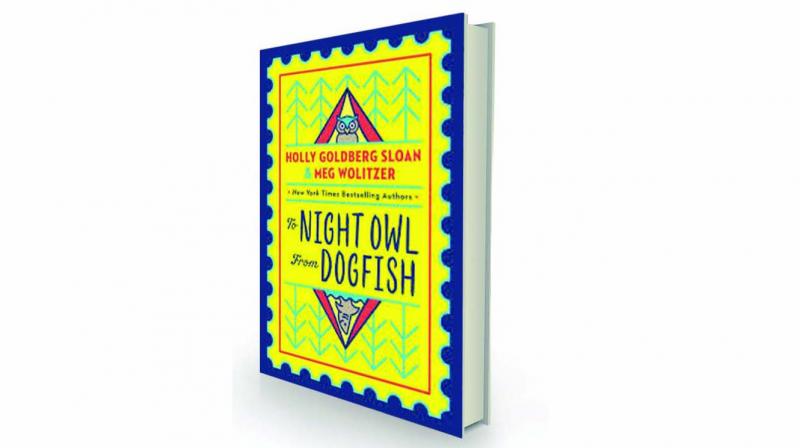 The last couple of months have been pretty unhappy for me due to a family situation no one could do anything about. So I wasn’t able to read with any focus until a week ago, when I came upon a title that caught my eye, which led me to read a back cover blurb that promised entertainment and a bit of nostalgia. I wasn’t sure I’d be able to read the book through — there is a frighteningly high pile of abandoned books on my bedside table – but surely, I hoped, a light-hearted, lightweight, young adult novel about two 12-year-olds plotting to get their respective single parents together to make a family of four could keep my interest to the end? Oh boy, it did! To Night Owl From Dogfish by Holly Goldberg Sloan and Meg Wolitzer is a hoot! (Pun entirely unintended.) Written entirely in emails and letters, it’s funny, sweet and totally unpredictable.

The book opens with an outraged email from Bett to Avery. She’s discovered (because she always knows where he hides his email password) that her father, Marlow, and Avery’s father, Sam, are in a relationship that is getting very, very serious. So serious that the two fathers have arranged to send their daughters to summer camp together where they hope the girls will become friends and even begin to see themselves as sisters. Since California-based Bett only discovered that her father was in a relationship by checking his email when he was at work, and New York City girl Avery only discovered her father was in a relationship when Bett emailed her to tell her about it and demand that they do whatever they can to end this nonsense, it doesn’t seem as though their fathers’ happy family dream will come true.

But there is no way to split up two people who are so in love with each other that they are even willing to blindside their own children to get their way. As hard as Avery and Bett try to get out of going to camp together, they are simply bulldozed by Sam and Marlow and next thing you know, despite the emails the two girls send each other swearing to Not Talk To Each Other, there they are at a camp in the wilderness. The two girls are absolute opposites as they’ve learned in the weeks they exchanged emails before camp. Avery is prone to anxiety; she’s afraid of almost everything, has almost OCD levels of hygiene. Bett is a rule-breaker like her father, a do-anything-at-any-time girl. Neither wants anything to do with the other, as they make very plain in the emails they continuously write to each other, covering everything from Avery’s ‘origin story’ to Bett’s curiosity about periods. Despite their instructions to each other to Not Talk At All when they meet at camp, Avery and Bett, already friends thanks to email though they don’t know it, become super close. Meanwhile, Bett learns by logging into her father’s email account, the two dads have found themselves in the opposite situation. Sam and Marlow are in China, touring on motorcycles, and the two — each one almost exactly the same as his daughter personality-wise — are not getting along at all. In fact, by the time Marlow and Sam have their second motorcycle accident and lose their passports, their relationship is most emphatically falling apart. By the time they return to the US, the two dads are single again — just as Bett and Avery have declared to each other that they are sisters. Now Bett and Avery have a different mission — to get their fathers together. To Night Owl From Dogfish is so funny that even while writing this review (hopefully without spoilers), I’m laughing my head off. It’s the perfect book to read when you’re down in the dumps — the girls are absolute darlings and remind me of my own niece, and their emails to each other perfectly sum up their personalities. The novel even has an element of nostalgia for older readers like me — it reminded me of one of my mother’s favourite movies, The Parent Trap (both the 1961 original starring Haley Mills and the 1998 remake with Lindsay Lohan), though that story of twins separated at birth trying to bring their parents back together is not half as inventive as this book.

If at all you’re floundering in sadness, read To Night Owl From Dogfish. I guarantee it’ll get you laughing again.