Dean went on to establish the Mahomed Baths in London and came to be known as the “shampooing surgeon”. 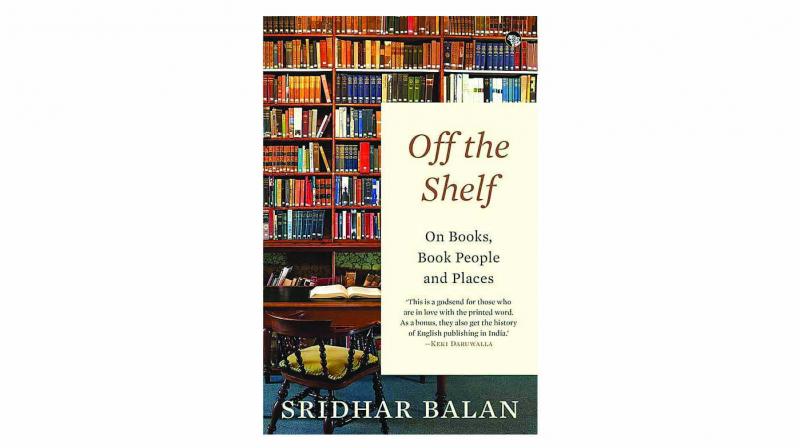 Off the shelf: On books, book people and places, By sridhar balan Speaking Tiger pp.246; Rs 350.

The success of literature festivals all over India proves that the lives of writers hugely interest the public, of both the reading and non-reading persuasions. But how about the lives of publishers and the work that they do to bring to life the written word?

Well, here in 246 pages is a good answer by Sridhar Balan. The histories and mysteries of the publishing world, more specifically, the English publishing world in India, are illumined by the sunny penmanship of Balan, a self-effacing, though exceptionally erudite writer who committed to 35,000 words one lucky winter evening over dosa and vodka-tonic with a publisher, and was held fast to his promise by friends and family. The result is an abridged Arabian Nights of memories, incidental narratives, stories within stories and delightful anecdotes that take the reader on a slow and charming joyride, a la a long-distance train journey in India, stopping now and again at hitherto-unknown destinations to dip into a fresh bite of information or just simply to admire the view. Psychologically, the reader always stays off-kilter, musing to themselves — what comes next?

It is quite curious to learn that the first Indian writer to be published in English was the unlikely entrepreneur, Dean Mahomed of the Hindostanee Coffee House in London, who was born in Patna, enlisted in the Bengal Army, gave up his job, sailed to England, married an Irishwoman and published the account of his adventures as Travels in 1794 with a preface by the historian, Michael Fisher. Dean went on to establish the Mahomed Baths in London and came to be known as the “shampooing surgeon”. Or that one of the first English writers to be promoted in India, on the other hand, was G.W.M. Reynolds, a popular writer, the sales of whose books surpassed Dickens’ but whom the redoubtable Virginia Woolf had never heard of.

It is rewarding to know that Swami Vivekananda, during his travels in Kerala, was captivated by a rendition of Jayadeva’s Ashtapadi by singer-lawyer, “Todi” Doraiswamy Iyer, passing before his house in Ernakulam. That it was Kannada-English writer Raja Rao who facilitated the first meet-up between Jawaharlal Nehru and the polymath Andre Malraux in which they discussed the merits of Gandhi’s adherence to the principle of non-violence and his departure from it when he offered to raise volunteers for the British Army during World War I.

It is interesting, too, to remember how the fictional Abbé Faria of Alexander Dumas' Count of Monte Cristo was modelled on the real Abbé Faria, a monk and hypnotist from Goa who is said to have got the better of Franz Mesmer, the father of mesmerism, in a face-to-face encounter. Legendary cricketer-prince Ranjitsinhji, the maharaja of Jamnagar, was an Indian Oskar Schindler — he took in 640 Polish orphans, some with special needs, and he housed and schooled them during the Polish Holocaust and effectively saved their lives.

The writer writes about what he knows, and the gentleman and true comrade that he is, is disinclined to examine the dark side of publishing, the forces that control and compel “book people”, as he prefers to have them termed.

Balan takes us on a visual tour of the great library of Alexandria, possibly the oldest in the world, built in Alexander’s memory by Ptolemy the Soter, with Aristotle’s disciple, Demetrius as its first librarian. It breaks the heart to learn that the commander of the Caliph’s army in AD 641 directed its contents be destroyed, an order that was duly complied with. It is said that there were so many manuscripts in the library that the fires continued to burn for several months.

Concise but comprehensive biographies of Emile Victor Rieu, soldier and writer of the classic children’s poem, ‘The Unicorn’, who set up Oxford University Press in Bombay, Roy Hawkins aka “Hawk” who continued his good work, “patrician among publishers” Ravi Dayal and Dhanesh Jain, an academic-turned-businessman-turned publisher, immortalise their legacies. All of it is served up with slices of avocado from Karnataka, mughlai paratha from Basant Cabin in Kolkata and generous dollops of the dark and luscious irrutukadai halwa from Tirunelveli.

Can we hope for a slower, longer second book?