The gods bestow a favour

Raja Rao had started his literary career at the age of 15 initially in Kannada and later in English. 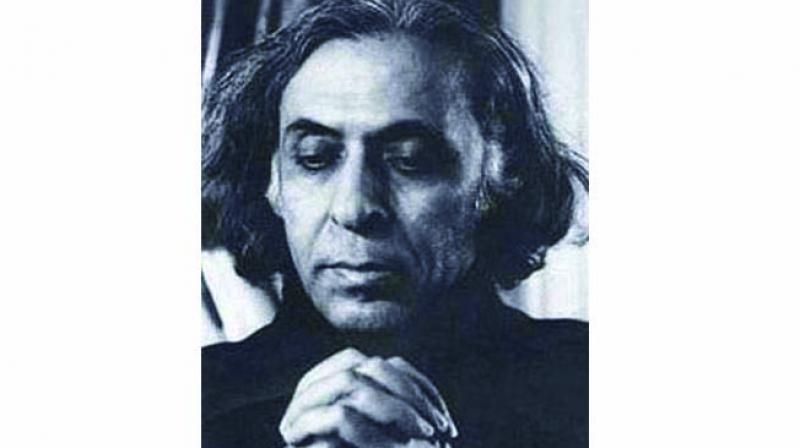 It was a book that sparked off a historic meeting that laid the foundation of political and cultural ties between Indian and France. While imprisoned in Naini jail during the freedom struggle, Jawaharlal Nehru had read a review of La Condition Humaine in the New Statesman. The author was Andre Malraux and Nehru resolved to meet him whenever the opportunity presented itself.

While attending to an ailing Kamala in Switzerland, Nehru hoped he might get a little time to dash to Paris to meet Malraux. But first, a meeting had to be set up and who better to do this than Raja Rao the celebrated writer?

Raja Rao had started his literary career at the age of 15 initially in Kannada and later in English.

Though Kannada was his mother-tongue, he felt he could not express himself adequately in this. His knowledge of Sanskrit was not good enough and thus for Rao, ‘English remained the one language, with its great tradition and its unexplored riches, capable of catalysing my impulses and giving them a near-native sound and structure’. But Rao always acknowledged his early debt to Kannada. He had published his early stories in Kannada periodicals and this literary output enabled him to adopt a more vigorous and authentic style which stood him in good stead for writing in English as well.

His early writings impressed Patrick Geddes, the polymath scientist, sociologist and urban and town planner who later was to be involved in urban planning in India. Geddes invited Rao to the new international college he had started in Montpellier. Rao’s excitement at the invitation from Geddes was palpable. Many years later, he was to recall that the letter from Geddes had come to him in a blue-covered envelope. The move to Montpellier was the beginning of a journey that would eventually lead Rao to spend more years outside than in India. Though Rao was proud to be Indian, he felt his “karma” that had destined him to spend half his life outside his country.

In those early years, Rao found France much like India formal and informal, friendly and chaotic.

He was impressed by the self-reflectiveness of the French language and its musicality. He resolved to start learning it. He soon moved to Paris to continue his studies at the Sorbonne and later served on the editorial board of the ‘Mercure de France’ a French periodical for seven years. It was during this time that he first met Andre Malraux.  Rao’s published stories attracted the attention of writers like Romain Rolland and Stefan Zweig. But it was his writing of ‘Kanthapura’ that was praised by Malraux and brought him his international reputation as a writer of stature. ‘Kanthapura’ was written in a thirteenth-century castle of the Dauphine in the heart of the Alps. Both E.M. Forster and Malraux were lavish in their praise.

Though it was the engagement with the human condition that was the common link between Malraux and Rao, Malraux being more of an adventurer, engaged with it in a more direct, forthright manner. As Rao put it, ‘Malraux’x love of revolution was spiritual, a love of pure greatness’.

At the age of 21, he went to Cambodia to discover the Khmer temples. In 1925, he went to Saigon to join the Young Annam League fighting against French domination. He joined archaeological expeditions in Afghanistan and Iran and his explorations in the Arabian hinterland for the lost city of Sheba made him famous. Malraux fought for the Republicans during the Spanish Civil War. He organised the air force for the international brigade and was wounded twice. He was also one of the few persons allowed to be present in the room when Picasso worked on his famous painting Guernica.

In the second World War he led a French tank unit and twice managed to escape German captivity.  Malraux was involved with the Chinese revolution in its early years but though he addressed the international progressive writers in Moscow, excesses under Stalin led to a disenchantment with Communism.

This was the man that Raja Rao had been tasked with arranging a meeting with Nehru. Malraux’s The Human Condition had won the prestigious Goncourt Prize in 1933, had been translated into a number of languages and he was the toast of Europe. The book is a novel based on the early days of the Chinese revolution, more specifically the Shanghai Uprising of 1927. The novel depicts characters including foreigners who lead the people to rise up against their colonial masters but are then finally betrayed and the uprising is put down. It’s also Malraux’s account of the early years of Chiang Kai-shek who started as a heroic revolutionary but finally betrayed the cause and was forced into exile. The book generated widespread publicity with the Goncourt Prize and people began to identify with the struggle and with the main protagonists depicted in the book.

Raja Rao soon realised that arranging a meeting with Malraux was next to impossible. Malraux was then the tallest literary figure in Europe. In contrast, Nehru was almost a nobody. He was one of the leaders of a nation that was yet to gain freedom, and freedom from colonial seemed a long way off.

Nehru was still far from becoming the symbol of a leadership struggle that would inspire the liberation struggles of Afro-Asian nations everywhere and make him so well known internationally.

Raja Rao knew Malraux but not  well enough to arrange the meeting. But as Rao said ‘ for an Indian nothing ever seems impossible. The Gods always worked for you’. Finally, the meeting was arranged by Jean Guehenno who edited the international literary magazine ‘Europe’ to which Malraux had contributed. Guehenno had also published some of Rao’s early writings.

The historic meeting took place at a Chinese restaurant ‘The Shanghai’ in Paris in January 1936.

Even at the restaurant, Malraux was besieged by patrons and serving staff for his autograph. At the meeting, it was Malraux who appeared more in command. Nehru appeared tentative and hesitant.

Nehru understood some French and Malraux some English. Rao was to be the interpreter but spoke so rapidly that it was almost impossible to translate. For Malraux ideas were supreme and if you could not die for an idea, it was not worth living.

Malraux’s first question was on Gandhism. ‘I am as you know, interested in Gandhism. I can understand any intelligent man’s aversion to violence. But I am an occidental man. I believe in action and in Europe, we are all in a hurry. But you, Monsieur Nehru, you are of the east. In India you have the window on eternity. You created the ‘Upanishads’ and the ‘Gita’ where Krishna, standing beyond duality says ‘ Arjuna kill and be killed for in the end, there is neither the killer nor the killed. Nehru pointed to the various ways in which Krishna had tried to stop the war. As for Gandhi, the apostle of non-violence had even offered to raise volunteers for the British army during the first world war. And the fight against the British was “to convert the enemy”.

In the end, Malraux promised to visit India when it was free. And visit he did, in 1958 as De Gaulle’s minister of culture accompanied by Raja Rao. The Malraux-Rao visit helped to lay the foundation of a Franco-Indian cultural relationship that endures to this day.