Matters reach a head when Dimple realises that after this course she goes to Stanford and Rishi’s off to MIT. 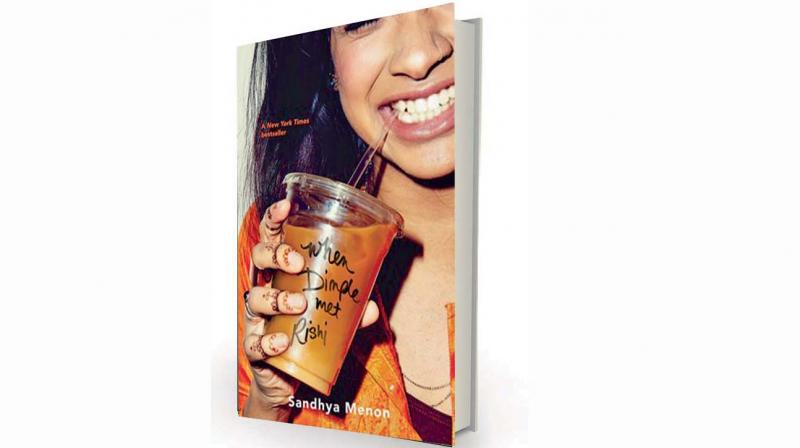 A word of advice to authors and screenwriters: if you score lower on the wit-o-meter than Nora Ephron, do avoid titles that play on Ephron’s iconic, much giggled over romantic comedy, When Harry met Sally. Yes, you will be judged, so please don’t set yourself up.

Having said that, Sandhya Menon is not half bad on the wit-o-meter, but no where close to Ephron. More romance than comedy, When Dimple met Rishi is set in San Franciso, though you may occasionally forget the location with Indian parents and aunties popping up and airing their cringe-making opinions through bites of Parle G and Milano biscuits purchased from ubiquitous Indian grocery stores.

Seventeen-year-old Dimple meets 18-year-old Rishi at a six-week web development course. For her, the meeting is accidental, for him it’s by design. That’s because Rishi is an honest to goodness sanskari mummy-daddy-know-best lad who actually fits better in small-town India than modern day US. His parents and Dimple’s have planned an arranged marriage for them, and he’s eager to meet his future bride.

“Rishi knew from watching his parents that what mattered were compatibility and stability. He didn’t want a million dramatic, heart-stoppingly romantic moments — he wanted just one long, sustainable partnership.”

This is the part that’s terribly creepy: An arranged marriage for teenagers. Who does that these days, apart from characters in regressive Hindi TV serials? It’s very hard to shake off that discomfort while reading the book. You may find yourself wishing that Menon had increased the age of her protagonists for a guilt-free read.

Dimple, fortunately, is the saving grace. She has been kept in the dark by her parents about this dreadful arranged marriage plan or else she’d have thrown a fit. She’s eminently likeable: intelligent, feisty, fights for what she wants, and has her life sorted. She knows exactly what she wants from it and forget an arranged marriage — even romance is nowhere near the top of her things-to-do list (possibly not in the middle either).  She also refuses to bow down to sanskari nonsense.

‘“Why not? You should be proud of your heritage, Dimple.’ From around the tiny shop full of imported Indian clothing, parents gave Mamma approving looks. Dimple could see her practically preening for the crowd. ‘Papa and I have held on to our culture, our values, for a quarter century! When we came to America, we said we would never.’ ‘Yeah, but I didn’t come to America,’ Dimple interrupted, darting a defiant glance at all the shoppers. ‘I was born here. This is my home. This is my culture.’ Mamma clutched the gold salwar to her bosom. ‘Hai Ram,’ she said faintly.’”

If you manage to push the arranged-marriage-for-teens horror to the back of your mind, the book is a fairly enjoyable read. While Rishi doesn’t stop hoping that Dimple will be his future bride, they stumble into a friendship that organically leads to a deeper relationship and Rishi finds himself doing things that he promised his mummy-daddy he’d never do before marriage. In fact, you change your mind about Rishi as you go along (but only when he’s not delivering prissy lectures about Indian tradition, culture, responsibility, etc.) and grudgingly admit that he’s actually a rather nice person: considerate, practical, dependable, all the things that matter. It’s not really his fault that he carries the first-born-son’s burden on his frail shoulders. You blame his parents for it. It is taken for granted that their aspirations must be his aspirations, etc. Though you do want to shake him (hard) for not challenging the norm. Particularly when you realise that he doesn’t really want to be an engineer, but cannot disappoint his parents.

“‘I told you. My parents. I made them a promise. I’m their oldest son. It’s just not going to happen. I have duties, obligations’.”

And so you wander through life in an American college with all its fun and freedom and low life too: The wealthy, arrogant gang of Aberzombies in this case. Menon is fluent in “teen speak” and the things she writes about are relatable. College contests, Little Comic Con conventions with freaky costumes, parties, the usual. There’s even a Bollywood dance (of course, yawn) at the talent contest.

The book is broken up into “she thinks”, “he thinks” passages which is interesting because the story is told from both their points of view, so teenage boys may perhaps enjoy it too!

The pace slackens during the middle of the book (let’s call it the not-strictly-needed Bollywood song sequence/montage shots moments). If 100-odd pages were deleted in the middle, the story may have read better. However, it picks up nicely in the last quarter.

Matters reach a head when Dimple realises that after this course she goes to Stanford and Rishi’s off to MIT. There will be miles between them, and long-distance relationships stink. Besides, she’s pretty certain that her career is far more important than love and she wishes she’d met him a few years down the line instead. Does she dump him? Read it, it’s fun and find out if there is a happily-ever-after. Or not. Remember, Dimple lives by her own rules!