The violence plays like the background score of a movie, present but not visible. 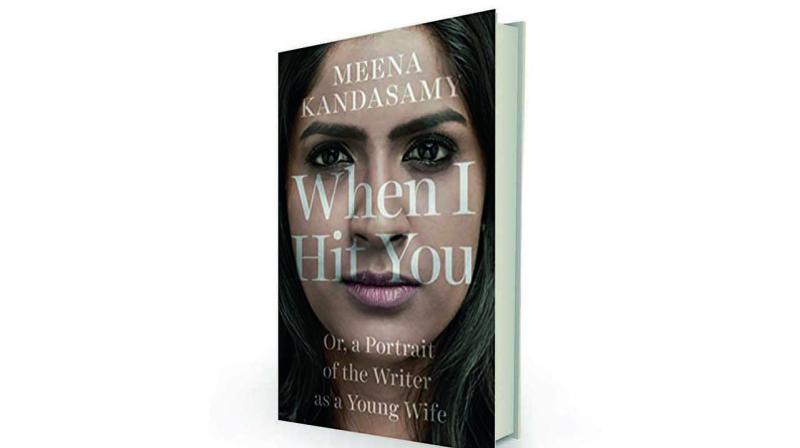 When I Hit You or, a Portrait of the Writer as a Young Wife by Meena Kandasamy Juggernaut, Rs 499.

The brutality of an abusive marriage is told through tender candour in this must-read book by Meena Kandasamy.

Reduction. Deduction. Seduction.
In this book about domestic violence, there are no visible marks — no bruises, no blood, no broken bones.

The horror is unobtrusive and cold. The violence plays like the background score of a movie, present but not visible.

In our world, there exist men who burn down their own houses, who break their own wives, who dislodge their own humanity. Her man — our young narrator’s husband — is one of them.

A self-proclaimed Maoist, he wounds himself with hot ladles to demonstrate his disdain for pain. He’s a man who is kind to strangers, like homeless boys, but can’t extend that kindness to his wife. He frowns upon what he perceives as his wife’s vacillating petit bourgeois poet-prostitute-female-writer ways. He finds mistakes with everything that she does. Like any coward, he uses small failures as an excuse to hit her.

The narrator faces this barbarity with horror and helplessness. She watches herself descend into the sinkhole created on the pretext of love. She knows it’s wrong. She also knows it’s inevitable.

So she becomes what he wants her to be: the good housewife.

She cooks food that pleases him. She allows him sex when he wants it. She wears the clothes that he wants her to. She learns Kannada, as her husband does not speak the language of love. She removes herself from Facebook. She lets him delete and answer her emails. She stops taking phone calls. She stops socialising. She stops putting on lipstick. She stops combing her hair.

Despite her own humiliation that is marked when the outside world mocks her appearance, and disappearance, she continues this succumbing and yielding.

How many roads must a woman walk down before we can call her a wife? Obviously too many, for things get worse. She must learn how to survive.

The narrator’s self-rejection, the denial of experiencing a moment because it’s already in the past, is most poignant. To cope, to escape, she dons the role of a writer marking plot points from her own abusive marriage.

She begins to think of sex, where a woman is expected to elicit nothing other than a willing toe-curl, as a relationship with a ceiling and not a man. She thinks of love as refuge where past lovers, like an older politician, are reminisced. She lets her husband justify marital rape as the “pollution” of a body that’s had pre-marital sex. She does not allow herself to feel, to be. It’s not the pain, the shame or the scarring that scares her. It is knowing that she cannot fight back, that she cannot teach him a lesson, that this is only the beginning. It is realising that she is defeated.

The justification and denial by her parents further deepens these wounds. “It’s for your own good”, she’s told. She’s instructed to be patient. She’s advised to have a child to mend the brute.

How many Indian girls in abusive marriages have experienced this trite?

She allows her unnamed tormentor to build the edifice of controlling her body, brick by brick, bit by bit, and then when she’s had enough, too much, she tears it all down with the silent fury of a nighttime earthquake. This is her liberation.

It’s not easy. The narrator speaks of this: the aftermath of walking out of her marriage. Of being questioned by social media and friends. Of being judged by cops when she files a complaint.

As a feminist and crusader of equality, the narrator exposes herself to the eternal question that all domestic abuse survivors, like Kandasamy and myself, are asked: “Why did you stay?”

“How could someone educated, independent and smart tolerate this?”

Unfortunately that these questions are asked more than

The answer is not simple. We are all creatures of love. We all hope that the one we love preserves our heart and doesn’t hurl it against the wall to shatter into a million pieces.

But the narrator is clear about her decision. She doesn’t want to be thought of as a battered wife because then she will be loved as “a scar loves a wound”. She deserves more than that. All women do.

All in all, the book travels around the life of the writer.

Kandasamy’s prose reads like a poem. Her feminism reads like a manifesto discovering itself. Her tryst with truth reads like a scar slashing across experience. Her pithy prose does not numb but highlights the horror. The narrator and perpetrator are left unnamed and largely undescribed. They could be any man and any woman. This obtuseness throws the violence into sharp relief, manifesting itself into the central character. This feeling of unfeeling is something Kandasamy excels at.

Simultaneously, “everything that you think about reminds you of your own state of entrapment” as the book deftly quotes.

Her story is my story and it is your story. What we see in it is our own truth. And in this way of telling the tale of violence, which is a demon present only to diminish and reduce a woman, the woman is neither diminished nor reduced. Instead, she rises and rediscovers her dignity.

This thing of crude is shaped into beauty by the hands of the author.

It is said that right before someone gets into an accident they forget the last few moments leading up to it. To dig into your worst memory of yourself, from experiences that have no material but your pain, and to turn that into a tomb of love, as this book represents, is in itself the hallmark of greatness.

And that is what Meena Kandasamy’s When I Hit You: Or, A Portrait of the Writer as a Young Wife is: a great book.

Meghna Pant is the award-winning author of The Trouble With Women, Happy Birthday and One And A Half Wife.