This was a war that saw the Indian political and military leadership at its historical best.

In a cold war era chracterised by inconclusive wars and regional stalemates, the third India-Pakistan war in December 1971 was a landmark conflict not only in the history of South Asia but also in global military history. It dramatically changed the map of this region and marked a historical revival of Indian military power. In just thirteen action packed days, Indian Army surrounded erstwhile East Pakistan, and three of its corps sized spearheads raced for the capital city of Dacca, located in the most defensible riverine terrain in the world. Indian Army’s Blitzkrieg bounced the wide rivers while Indian paratroopers parachuted from helicopters. Operations were speeded up and precision air attacks were launched to stun the enemy command centres.

As the Indian Army bypassed all major centres of opposition in its race for Dacca, the Indian Navy blockaded East and West Pakistan.

Again historically, 93,000 Pakistani armed forces personnel, who had horribly suppressed, raped and massacred the Bengali masses of East Pakistan, were made to lay down their arms and taken as prisoners of war by Indian Army, liberating the Bengalis and the new nation of Bangladesh was created.

This book by Maj. Gen. (Dr) G.D. Bakshi lays bare some startling insights into how India’s most successful war since its inception was fought and won in just thirteen breathtaking days. For the first time it also provides an accurate insight into why Mao ze dong, with the mighty Chinese Peoples Liberation Army, did not dare to intervene – even symbolically. It simply let its “most trusted ally” go down fighting desperately. Despite fervent Pakistani appeals and American prodding-why did China sit out this war? This book clearly answers this seminal question. It also highlights the roles played by the USSR, the cynical and self serving role of USA’s, President Richard Nixon, Secretary of State  Henry Kissinger and of course the roles played by the Indian political and military leaders, the Intelligence services and bureaucracies. 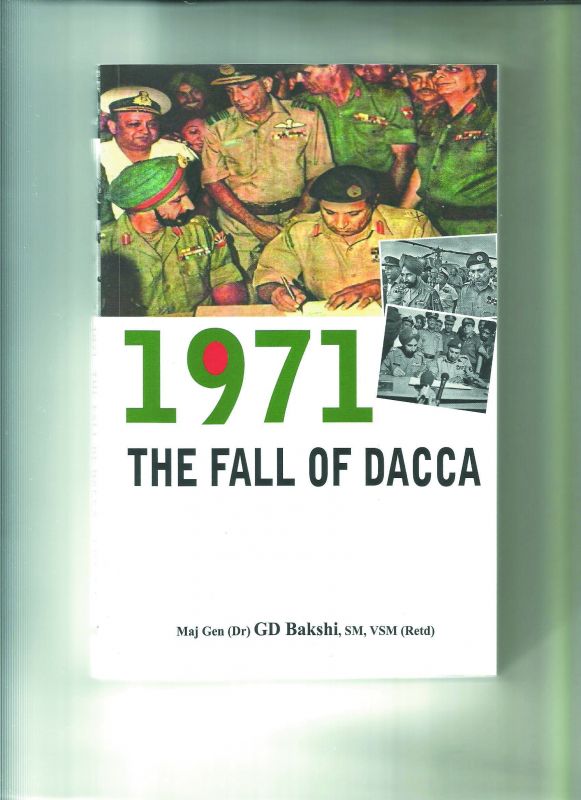 Indian Navy Eastern Fleet had India’s only aircraft carrier INS Vikrant with barely 20 light fighter-aircraft.  When asked if  it would take on the Seventh Fleet, the Flag Officer Commanding-in-Chief, Vice-Admiral N. Krishnan, said, “Just give us the orders.”  The Indian Air Force, having wiped out the Pakistani Air Force within the first week of the war, was reported to be on alert for any possible intervention by aircraft from the USS Enterprise. Soviet intelligence reported that a British naval group led by the aircraft carrier HMS Eagle had moved closer to India’s territorial waters.

This was perhaps one of the most ironic of events in modern history where the Western world’s two leading democracies were threatening the world’s largest democracy in order to protect the perpetrators of the largest genocide since the Holocaust in Nazi Germany.   However, India did not panic.   It quietly sent Moscow a request to activate a secret provision of the Indo-Soviet security treaty, under which Russia was bound to defend India in case of any external aggression.

To counter the two-pronged British-American threat, Russia dispatched a nuclear-armed flotilla from Vladivostok on December 13 under the overall command of Admiral Vladimir Kruglyakov, Commander of the 10th Operative Battle Group (Pacific Fleet). The Russian moves clearly helped prevent a direct clash between India and the US-UK combo.

It was India’s finest hour in which it had literally revived the Kautiliyan paradigm of war- fighting. Above all, as Bakshi points out, it was a just war- in keeping with India‘s civilisational concept of a Dharma Yudhha or righteous war. The Indo-Pak war in erstwhile East Pakistan saw the revival of an Indian paradigm of war- fighting that had first been enunciated by Kautilya in his magnum opus, the Artha Shastra-premised upon a long preparatory campaign to destabilize the target, build up forces methodically and then launch a sudden, fast- paced operation using war elephants en masse for shock action, to decisively defeat the enemy and march onto his capital. This was the precise pattern of operations that emerged in 1971. It entailed eight months of preparation in which the Bengalis’ Mukti Bahini harassed and stretched out the Pakistani army.

Kautilya used to insist upon achieving complete information dominance before launching the campaign. India was able to shape the global, regional and local informat on environments completely in its favour before commencement of hostilities. It focused radio- monitoring resources in the east to keep itself fully abreast of all Pakistani military moves. The Mukti- Bahini provided vital enemy and terrain intelligence. India shaped attitudes and opinions all over the globe and was able to get tremendous assistance and support by its ‘mitra’ (fried/ally), the USSR to counter the highly  potent threat of the USA-UK and China which was aggressively supporting Pakistan. One of the key findings of this book is the answer to the historical conundrum- why did China not intervene in this war? It was then the million dollar question and led to a lot of concern in the Indian leadership right till the very end.

For military leaders and decision-makers all over the world this war planned and fought by India in text book tri- services  campaign form provides highly pertinent lessons that are still valid in our times. It was a model tri- service operation with superb coordination and synergy between the three services and all wings of the Indian state. Synergy and coordination has been a historical weakness in Indian attempts at war fighting. This in fact was the most remarkable aspect of the 1971 India-Pakistan war. How it became a classic ‘whole of the government approach’ with all forces/departments/organisations of the Indian nation state working in complete harmony to generate an amazing synergy that produced spectacular results on the battlefield.

This was a war that saw the Indian political and military leadership at its historical best. So did the intelligence services and diplomats cover themselves with glory on how they supported clear-cut national aims and how a highly synergised strategic approach unfolded. Bakshi goes into details of the stellar roles played by Mrs. Indira Gandhi, Army Chief General  (Field Marshal) Sam Manekshaw, Naval Chief Admiral S.M. Nanda, Air Chief, Air Chef Marshal P.C. Lal and also the lesser known but highly significant- in fact pivotal-for their roles in  planning, Lt Gen JFR Jacob, Chief of Staff, Eastern Command and Maj Gen Inder Gill, Director, Military Operations.

The 1971 war will always rank amongst the classic campaigns of the worlds military history, that should define the Indian art of war-fighting and should be our text book model in the turbulent years ahead.

In December 2011, Bangladesh conferred on Mrs. Gandhi its highest award, the Bangladesh Swadhinata Sammanona (Bangladesh Freedom Honour ) for her outstanding contributions to Bangladesh's Liberation War. It is the highest honour for any foreign national, albeit awarded after 40 years of Bangladesh's independence from Pakistan.

Mrs Gandhi was one of the only two assertive Prime Ministers of a political party which since Independence continues to be disastrous liability for India’s security. Examples of her assertiveness were Indian Army’s response to the Chinese in 1967 at Sikkim and the 1971 war. Her predecessor , Prime Minister Lal Bahadur Shastri proved his assertiveness during the 1965 Indo-Pak war, but died an unnatural death shortly afterwards.