Books   08 Jan 2022  Tales of ‘The Lion’: How Jaisimha thrilled, spilled and swashbuckled
Books

Our cricketing icons of that period turned out in sparkling whites for India, not for pelf or power but for the sheer enjoyment of the game 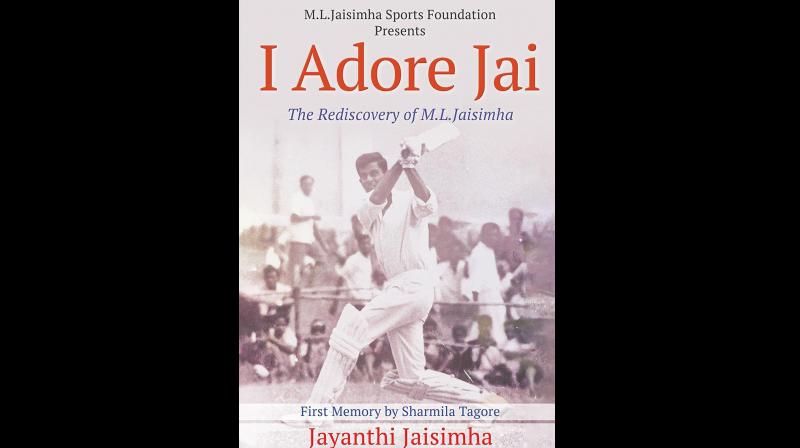 I Adore Jai — The Rediscovery of M.L. Jaisimha by Jayanthi Jaisimha. (Amazon)

Between 1959 and 1971, M.L Jaisimha played 39 Test matches for India, aggregating 2,056 runs at an average of 30.7 runs per innings. As statistics go, particularly by latter-day standards, these numbers may not have set the Godavari or Krishna on fire. That said, the statuesque stylist from Hyderabad lived and played in an era of grace and flair, when statistics rarely mattered. Our cricketing icons of that period turned out in sparkling whites for India, not for pelf or power but for the sheer enjoyment of the game. This at a time when India was not among the strongest in the world and was still finding its feet. It is significant, though, that as Jaisimha bid adieu to the game at the international level in 1971, he saw the ushering in of the new look, professional cricketers in the shape and form of Gavaskar, Viswanath, Solkar and the great spin quartet of Bedi, Prasanna, Chandrasekhar and Venkataraghavan, all shepherded by Mansur Ali Khan Pataudi, himself part of the senior brigade represented by the likes of Jaisimha.

The flamboyant Hyderabadi scored just three Test centuries, none more significant than when he was called up out of the blue and flown in overnight to play for India in the Third Test against Australia in Brisbane (owing to injuries to key players) and scoring 74 and 101, brushing aside a punishing jet-lag and nearly pulling off an amazing win for India. Arguably, those two knocks might have been his swansong. Jaisimha also has another unique record to his name. He was the first batsman in Test cricket history to have batted on all five days of a Test match, over two innings, in 1959-60 in Calcutta against Australia. A year later against Pakistan at Kanpur, he batted through an entire day’s play scoring just 54 runs and was tragically run out the following day for 99 runs — a marathon effort that lasted 505 minutes.

So much for Jaisimha the cricketer who charmed his fans, both men and women, with his collar-up, knotted neck-kerchief trademark look. He wore his regal mien as to the manner born. To say nothing of his lazy elegance as a batsman par excellence. He could also turn his arm over for a spell of deceptively gentle off-spin. Those brief numbers were merely to provide a soupçon for us to talk about a book recently released by the M.L. Jaisimha Sports Foundation, titled I Adore Jai — The Rediscovery of M.L. Jaisimha, published by Notion Press. The book, liberally interspersed with black and white photographs, has been put together at the initiative of his immediate kith and kin, his wife Jayanthi (who takes front cover credit) and his sons Vivek and Vidyuth. The book is notable for 78 contributions by way of reflections and reminiscences by former cricketers, journalists, close friends and family members.

The likes of yesteryear heroine Sharmila Tagore, wife of Jai’s brilliant captain, Pataudi, opens the book with some personal anecdotes, nothing to do with cricket, that make for riveting reading. The star of numerous hit films enjoyed a special relationship with the Jaisimha family. She was “a fan and a fanatic” and found him “heartstoppingly dashing”. As did many others. Elsewhere in the book, veteran theatre actress Dolly Thakore drools in similar vein. I have to say that I found the added front cover legend “First memory by Sharmila Tagore” one title too many.

Sunil Gavaskar has made no bones about the fact that Jaisimha was one of his all-time great heroes. India’s legendary opener toured with Jai on his debut tour of the West Indies in 1971. While Gavaskar’s record- breaking exploits in the Caribbean stole all the headlines, the little master himself makes no bones about how Jaisimha inspired him with constant words of encouragement. Gavaskar was particularly impressed by Jaisimha’s attention to detail, even pronouncing his name punctiliously as “Gaa-vaskar”.

Former Pakistan captain and superb batsman, Asif Iqbal, who played alongside Jaisimha for Hyderabad found Jai a truly inspiring figure. He cannot stop talking of Jai’s gait, dashing good looks and, always, that “upturned collar”. India’s most celebrated all-rounder Kapil Dev waxes eloquent over the Jaisimha charisma and deeply regrets that he could not play during the same era.

Likewise, India’s other little master, Gavaskar’s brother-in-law, Gundappa Viswanath, speaks admiringly of Jaisimha’s empathy and astute understanding; how he had a simple way of “teaching” his wards the finer aspects of the game.
Another fan favourite from that era, Abbas Ali Baig, viewed Jaisimha as a twin brother, an apt description in more ways than one. Their careers ran on parallel lines from the time of their induction into the game. If screaming girls chased Jaisimha around the country, the charming Abbas Ali Baig once had a girl running on to the field and planting him a kiss at the Brabourne Stadium, Bombay, when he completed a half century.

Delving into their fondest memories of Jai, are former cricketing luminaries like Prasanna, Azharuddin, Shastri, Srikkanth and Laxman, as well as broadcasters and writers such as Harsha Bhogle, V. Ramnarayan, Aussie jazz enthusiast and close family friend Hartley Anderson.

Jaisimha was the archetypal bon vivant. He loved the good life, his tipple of choice and was apt to lose his cool if his favourite India Kings brand of cigarettes was, for any reason, unavailable. It appears he was also possessed of a fine singing voice and could belt out Elvis Presley numbers at will at parties.

The last word, however, should go to the Jaisimha family. His wife, Jayanthi, sons Vivek and Vidyut have painted eloquent and loving word-portraits of their evergreen hero. Even his demise ultimately of cancer has been handled with sensitivity, eschewing mawkish sentimentality. On two counts, however, this reviewer can be critical of this slim volume. One, there were just too many people the family tried to fit in to the book, many who would not have resonated with the average reader. Secondly, the production and design values of the book could have been far better. That much the protagonist of the book deserved.

I will close with my own memory of Jaisimha, which is through the stentorian voice of India’s former captain the Maharajkumar of Vijayanagaram, the legendary yesteryear radio commentator “Vizzy”, who, every time Jai walked in to bat, would intone in his plummy voice, “Jai for victory, Simha for lion, Jaisimha, India’s victorious lion strides in majestically.”