Books   06 May 2018  Unravelling the charisma of Indian democracy
Books

Unravelling the charisma of Indian democracy

These illustrations are only from the introductory chapter of the book. 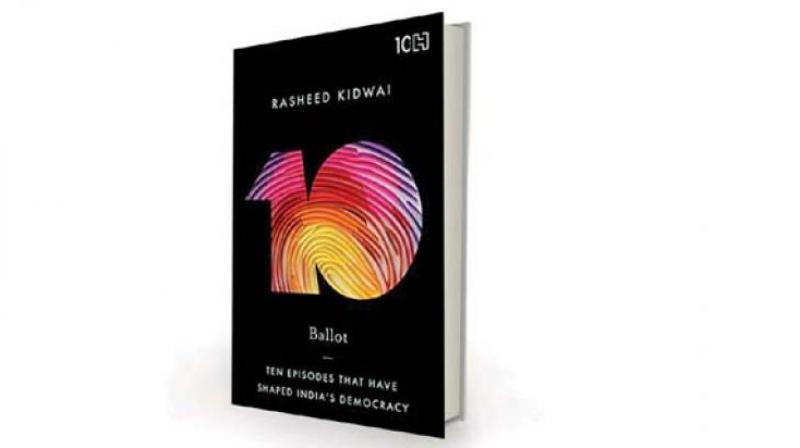 Rasheed Kidwai’s Ballot:  Ten Episodes that have shaped India’s Democracy is a fascinating kaleidoscope of India’s democratic experience and experiment over the past seven decades. This short book is a must read for all those who are interested in discerning as to how this chaotic, anarchic land of a million mutinies is also a democratic continuum ever since its liberation from British imperialism.

It may be interesting to note that in the decade succeeding the end of the World War-II in 1945, of all the nations that threw of the yoke of colonialism across large parts of Asia, Africa and Latin America, India is perhaps the only country that never ever went under military rule or one-party authoritarian overlordship.

Even in the post-Independence period, there were many naysayers and doomsday theorists who repeatedly predicted that India, after a bloodstained Partition, would never ever be able to hold together. It would implode into 10 or 20 other pieces. These prophecies got further amplified when the Constitution of India, adopted on November 26, 1949, cast in concrete that the principle of universal adult suffrage would be the guiding beacon of our electoral system.

In a country that was 70 per cent illiterate, as the author rightly points out quoting the First Election Commissioner of India Sukumar Sen, it was a momentous “act of faith”.

In the introduction to the book, Rasheed sketches some very interesting vignettes that even I, who has been a political activist for over three decades now, was oblivious of. For example, he narrates that before the first general elections in 1952 when the enumerators were going across the length and breadth of the country enrolling voters, most of the women electorate were being enrolled as wife of A, mother of B, sister of C etc. This was because of deeply-entrenched social taboos that forbade women to be identified by their first or maiden name.

The author points out that the Election Commission put an end to this practice but as a consequence 2.8 million of the 80 million women voters could not exercise their franchise. Orthodoxy and obscurantism were far more important than the right to vote! It would be remiss not to mention that in many “evolved” democracies of the world, women won the right to vote after an extremely hard and arduous struggle. It was much like women in Saudi Arabia agitating for the right to drive in today’s day and age. Rasheed also brings out something that most would be blissfully unaware of and that is in the first and second general elections in 1952 and 1957 there were as many ballot boxes as there were candidates. The election symbol of each candidate was painted on the ballot box for easy identification. This process was discontinued in 1962.

Then there is this interesting titbit about ballot boxes that a Parsi, Pirojsha Godrej’s company was tasked to manufacture in Vikhroli, a suburb of Bombay (now Mumbai). They had to churn out on an average 15,000 steel ballot boxes every day. A news report of that time quotes a Godrej spokesperson as saying that if the nine-inch long boxes — 2.8 million in all were stacked on top of each other, it would have been quite like putting a couple of Mt Everest’s on top of each other.

These illustrations are only from the introductory chapter of the book. There are several such attention-grabbing gold nuggets of trivia scattered across the pages of the book.

Rasheed has attempted to look at Indian democracy through the prism of personalities — from Nehru to a bit of Sardar Patel all the way down to Narendra Modi encompassing Mayawati and even Bal Thackeray. It is here that Rasheed has hit upon the most obvious unarticulated truth of South Asia, perhaps without realising so. The truth is that the social ethos of this part of the world are deeply feudal — we as a people are primarily idol worshippers, something which each invader, usurper, looter, freebooter, plunderer and eventual occupier very quickly discerned.

That is why the story of Indian democracy is unfortunately the story of a few personalities — self-elevated a few notches and then placed on a pedestal and worshipped by the fawning masses. This, primarily, is the reason that from Kashmir to Kanyakumari, Indian democracy is underpinned by the most ossified structures that are closed, opaque, incestuous and self-perpetuating in their disposition.

However, in its anxiety to be a quickie, the book ends up being a little cavalier towards some of the more institutional paradoxes of the past 70 years that have come to bedevil our democracy today — the decline and increasing irrelevance of the parliamentary and legislative institutions, the eventual end result of an electoral exercise and the  non-existence of a separation of roles between the executive and the legislature that is supposed to exercise oversight on it. And the crisis in the judicial system whereby the doctrine of checks and balances, the sina-qua-non of a vibrant democratic order stands upended for over 25 years now.

However, in the ultimate analysis, if democracy is about the life and times of  a few leaders then Rasheed has done a sterling job in telling the tale of their rise and, in some cases, their political and even physical demise. For both the initiated and the uninitiated, the apolitical and the overly political, the book has something.

Manish Tewari is a lawyer and a former Union minister. The views expressed are personal. Twitter handle @manishtewari