The Murderer now lives by the banks of a river. The old bridge across the river has been washed away; he wants to build a new bridge. 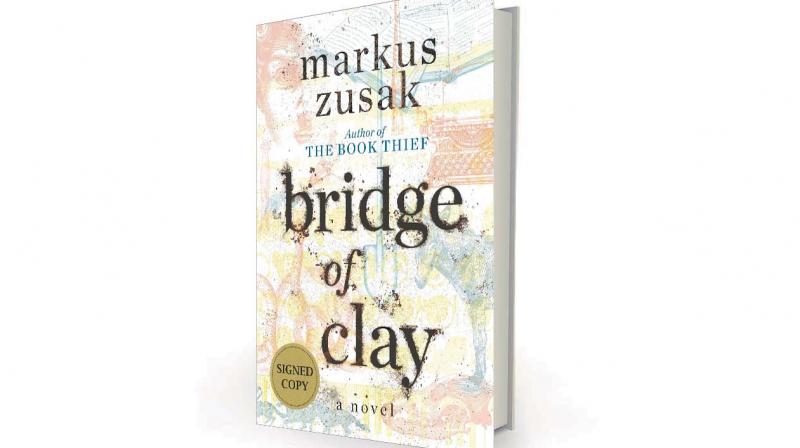 Here’s a confession: I read The Book Thief by Australian writer Markus Zusak perhaps eight or nine years ago, and I do not remember more about it than it was a book about books, it was set in Germany (I think) during World War II (or just before World War II?), Death was a character, and the heroine or hero stole copies of the books that the Nazi regime decided to burn, and saved them for us to read forever.

I reiterate, I do not remember much about The Book Thief. But I do remember how I felt as I read it —  uplifted, then down in the depths of darkness; scared, but then unbelievably happy; often puzzled, but just as often high on the wonder of epiphany; hurt deep to my soul, as though someone were relentlessly scraping into my heart with a rusty knife. I remember all this, which is why, if anyone asks, I will always say that The Book Thief ranks high on my list of best books.

Naturally then, I approached Zusak’s new novel Bridge of Clay with trepidation. For one, this is his first book in 10 years. Heaven knows what may have happened to his writing skill in the time since The Book Thief. For another, I tried to read the novels he wrote before The Book Thief and wanted to cry when I finally laid my hands on them: they were not terrible, but they just weren’t good. So clearly there are some very deep inconsistencies in his writing. Still, there was no way I’d hang around waiting for the first reviews of Bridge of Clay to buy it, so I pre-ordered it and when it arrived on my e-reader last month, I was thrilled.

Now I have finally read it, and what can I tell you about it? Lots. And also, very little. The latter is because, for me, Zusak is more an inciter of emotion than a writer with a story to tell.

Ask me to tell you what the book is about, and I will either burst into the same kind of poetry as I do when talking about The Book Thief, or say nothing at all. The former is because Zusak is a story-teller. And in Bridge of Clay, he tells quite a story: a story with backstories that have backstories, a tale with beginnings before beginnings. A narrative that shows us how no person on earth is just one person. Every person has been built by the people surrounding her or him, and each person surrounding our hero has her or his own series of stories, and so on, till you know you may be one solitary person, but in the same way that we are all made of stardust, we are all also made by people.

See? Some kind of poetry happened right there in the para above. But now I shall turn prosaic and tell you the story of Bridge of Clay. The book is about the five Dunbar boys, sons of Penny and Michael Dunbar. Penny, a refugee from Iron Curtain Poland, is dead of cancer. Michael was so shattered by her death that he lost his grip on everything left of his life with Penny and soon abandoned even their five boys. The boys, who adored their parents, pull themselves together and pull ahead together. They were young when abandoned —Matthew, the oldest, was just about 18 though he had long quit school to work in construction. Tommy, the youngest, was still a child. In between, in descending order of age, were Rory, Henry and Clay. Together, the five made a full family; individually, each made the most of his strengths.

And then one day, the Murderer returns to their city. He enters their home. He notes the sameness and the differences in this home since he last saw them, which was just after Penny died.

The Murderer now lives by the banks of a river. The old bridge across the river has been washed away; he wants to build a new bridge. He needs the Dunbar boys’ help. But only one is willing to help him — Clay. And when Clay leaves his home for the Murderer’s, that’s when the story takes off: it swirls forward, dances backwards, dives farther back; it sweeps sideways and twirls around, it goes here, there and everywhere, and suddenly, though the book is about the bridge that Clay builds, and therefore about Clay, it’s actually about everyone who made Clay — Clay and the other Dunbar boys.

The way I’ve described Bridge of Clay, you might believe that it belongs to the magic realism genre. But no — it’s as real as real can be. All the signs and symbols in the book are of tangible things — the typewriter, for instance, you will see how relevant it is; and the clothes peg Clay always carries in his pocket is grounded in reality too. But if I were to describe every twist and turn this book makes, I would not only need double the length of this review, but also give you the book in the most boring way possible. I don’t want to do that. I want you to be swept into the world of the Dunbar boys, delighted and laughing and unhappy and heartbroken just the way I was. Read it. You will not regret it.