Celebrating the spirit of Mumbai

Communal riots break out the next day, the city in a frenzy of bloodletting created by politicians enjoying the show on their TVs. 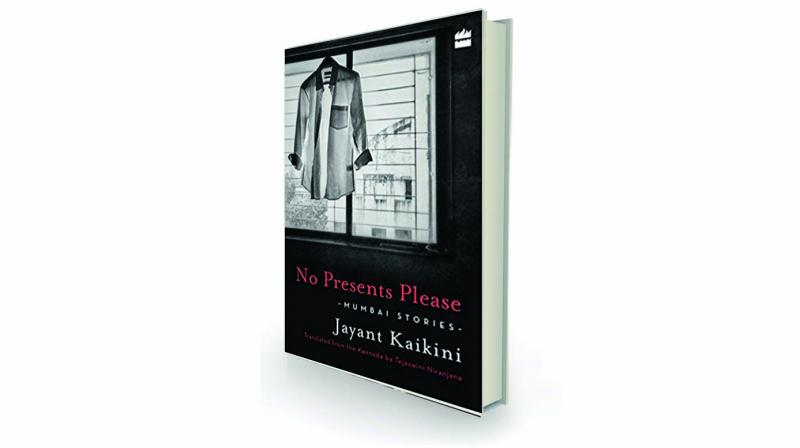 The concept of “the spirit of Mumbai” — the ability of the maximum city’s population to take disaster in their stride and get back to life as usual the next morning at the latest — has been given such a thorough drubbing by activists and the media in the last 15 years or so that I was completely taken aback by Kannada writer Jayant Kaikini’s Mumbai stories in his collection, No Presents Please.

Beautifully translated by Tejaswini Niranjana, the book brought back to me something I thought I’d lost forever: my fascination with the many worlds of the city I moved to nearly 25 years ago with the intention of making it my home. From the second I stepped off the train at Victoria Terminus in 1993 (now Chhatrapati Shivaji Terminus), I was caught in a web of wonder and delight. I had never met people like this before: fully focused on their work and their lives; classlessly determined to do more with themselves than merely survive. I loved Mumbai and the spirit I only learned about after I’d moved here. I loved everything about this flashy but seedy, indifferent but caring, violent but compassionate city. The city that never sleeps (except on Sunday mornings till 1 pm to judge by the lack of traffic on the roads). The indefatigable city.

Of course, over the years, I lost that sense of wonder, and after the great deluge of 2005, the train blasts of 2006, and the terror attack of 2008, the tenor of life in Mumbai changed for me. I was one with the activists: no longer did I believe that the ability to pick up the pieces and carry on as usual was a good thing. Instead, I believed, and still believe that the city’s various administrations need to do some actual work and aim to prevent disasters. Relying on spirit alone is not good enough.

But, oh! That spirit is so necessary. I had forgotten, for instance, how in the trauma of the great deluge of 2005, when lives were lost and property drowned, the whole population of the city came together to take care of each other: people inviting nearly-drowned strangers into their homes and offices; people ensuring that other people stuck on the roads had water to drink and food to eat; restaurants staying open 24x7 so that people determined to swim home in the floods had a place to sit for a while, a restroom to visit, and a hot cup of tea.

The story titled Water in this collection brought all that back to me, even as a young man wondering whether to leave Mumbai and move elsewhere for double his salary takes care of an old man with a poor diagnosis but the need to stay alive at least till his granddaughter marries.

Then there’s Interval, a most intriguing story that begins in a somewhat filmi manner — young man from Vidarbha working as an usher at a cinema hall crushing on film-struck young woman from a nearby chawl, the two growing closer with every passing first day-first show without exchanging more than a few words ever, and then planning to elope — but no Bollywood film ever ended like this story does, and the shock of it made me laugh so hard and then become so proud of the young people in my city that I had to put away the book for a few days just to revel in this one story.

The twist in Unframed, the story I read next, was not half as startling as the one in Interval, but I love this story too for what it says about Mumbai and its population of neighbours who turn on neighbours at the same time that strangers become each other’s families. Gangadhar, the owner of a framing shop, doesn’t know what to do with some “death portraits” — enlarged photos of people who have died which will be displayed by their families — that have never been collected by the people who wanted them framed. It seems disrespectful to throw them away but what else can he do with them? Eventually, he gives them to an actor who says portraits like these are useful for stage sets. Communal riots break out the next day, the city in a frenzy of bloodletting created by politicians enjoying the show on their TVs. And after the riots end, Gangadhar is approached by a young man, an orphan, who needs those portraits to show the parents of the girl he wants to marry that he is from a respectable family, not just some stray from the streets. But Gangadhar has already given away the photos, so what does he do?

I’d love to give you details about the 13 other stories in this book as well as the three I just described, including the title story, No Presents Please, about what happens to a young man’s sense of identity at the very moment that it should be strongest, but I have only space for 900 words in this review when I’d like to write 5,000.

So know this: Over 25 years in this city, in the push and pull of the daily commute, the clamour of the traffic jams, the clouds of dust from potholes and constant construction, I’d forgotten how marvellous Mumbai really is. Thanks to Jayant Kaikini and Tejaswini Niranjana, the spirit of Mumbai has come back to me.