Espionage is much more than cloak and dagger ops

The Unending Game, the author writes, “is not a personal memoir, nor is it about the organization for which I worked. 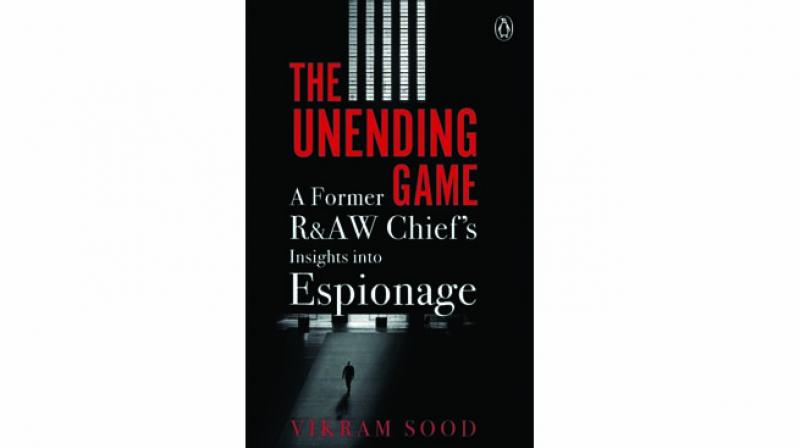 Virtually all books written in India by former intelligence agents have been of the kiss-and-tell variety, replete with sensational disclosures and juicy details of successful intelligence operations. Former R&AW chief Vikram Sood’s book is of a different order altogether, dealing with concepts, approaches and the larger lessons of espionage.

The Unending Game, the author writes, “is not a personal memoir, nor is it about the organization for which I worked. Instead, it seeks to familiarise those who are interested in the intricacies of espionage and intelligence collection and, hopefully, to help prepare our systems for the turbulence that lies ahead.”

This thought provoking book draws the reader deep into the nuances of intelligence operations while clarifying that espionage is much more than cloak and dagger operations and secretive spies.

The prologue, which is about the discovery of Pakistan’s clandestine nuclear weapons programme, highlights how the political leadership can on occasion compromise the country’s vital interests. Even while the whole world was hugely concerned about Pakistan’s nuclear weapons programme, the then Prime Minister of India, Morarji Desai, did nothing to support his external intelligence agencies quest to know and try prevent Pakistan from developing the bomb.

R&AW had “no support or sympathy from the Prime Minister of the day, Morarji Desai, an acerbic Gandhian who did not want to have anything to do with intelligence collection about threats to the country, much less with matters relating to nuclear weapons acquisition.”

What is worse, Morarji Desai, went as far as to tell the then Pakistani dictator Zia ul Haq, who was actively pursuing nuclear weapons capability, that “India was aware that Pakistan was making a nuclear bomb. Alerted, Zia went into a rigorous clampdown. The R&AW was up against a known adversary but also the indiscretions and opposition of their own people.”

Although Sood does not mention it, his observations must be read against the little-known fact that small minded Indian politicians and officials (including those in the intelligence community) have often done incalculable harm to the larger and often long-term mission of intelligence collection by shutting down operations and leaving foreign operatives in the cold.

The book rarely refers to specific operations or Indian achievements and is instead divided into three conceptual sections titled “Tradecraft”, “Inside Intelligence” and “What Lies Ahead.”

The first section of the books explains the backdrop against which espionage methods and practices developed in the 20th century, the most defining feature of which was the Cold War between the world’s two superpowers, the United States and the Soviet Union.

“Espionage may be as old as history”, the author writes, “but there are no international legal rules in any statute book about how its mysterious world should be regulated…Few would disagree with the description given by former Israeli intelligence agency Mossad chief Efraim Halevy, ‘Intelligence is not a science, certainly not a natural science. It is an art or a craft, and as such it cannot be governed by the basic tenets of logic.’”

“The basic purpose of advance or current secret intelligence is to ensure that the government faces no surprise and the information gathered helps it to make informed decisions or take counter-action…There is also no guarantee that correct decisions will be taken with this advance knowledge”, says the author.

Although the author does not say so but this is perhaps one reason why Israeli intelligence is considered so effective. It is not just that Mossad spies are highly effective intelligence operatives but also because the Israeli leadership is pro-active, supportive and ready to act on critical intelligence. Thus, when the Israeli leadership learnt about Syria’s clandestine nuclear reactor in 2007 it was prepared to send its air force bombers to destroy it. Our politicians do not even talk about the nuclear threats Pakistan poses.

The second section of the book is about surveillance, deception, use of money power and the information war, among other things. A brief but interesting episode in this section is about how conversations between the then Pakistan Army chief General Pervez Musharraf in Beijing and his chief of general staff General Mohammed Aziz Khan in Rawalpindi was intercepted by R&AW during the Kargil war to reveal the Pakistan’s Army’s direct involvement and the use of the Mujahideen as a cover.

“India went public with the intercepted conversations on 11 June, on the eve of Pakistan Foreign Minister Sartaj Aziz’s visit to India. Although the disclosure served the immediate political and tactical objective of the government, it also permanently closed this channel of intelligence information”, the author explains. “More than that, it also meant that the adversary and the rest of the world now knew that the Indians could access conversation in this particular manner, and they would take steps to close leaks.”

The book’s last section is on the future, particularly the likely impact of technological change and the explosion in the virtual world.

“Statecraft is a mixture of diplomacy, military power, economic strength and intelligence capabilities. No single factor by itself will be enough to attain our goal as a great power”, the author concludes in his epilogue. “For India, the old threats will remain and new ones will arise in unimaginable and unpredictable ways. Any intelligence service that begins to understand what lies ahead and what should be done now to prepare itself for the future will have better chances of providing answers.”

The larger lesson of the book, from what I could make out, is that in the ultimate analysis a nation stands alone and to protect itself must never falter in the unending task to keep track of what is going on in its periphery as well as all around the world. Thus, the intelligence task is not just about keeping tabs on Pakistan’s generals or terrorists in the Kashmir Valley but about the way the world is turning in its eternal gyre.