All is well with Shui — or as well as life can be for a teenager — when a new girl joins the school. 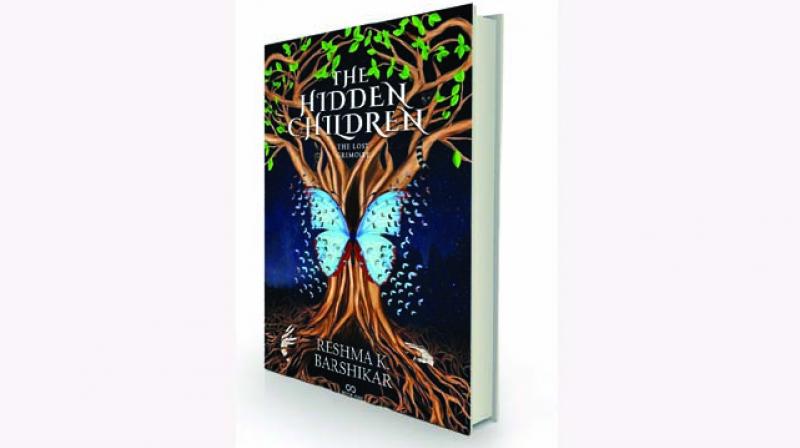 I have such mixed feelings about The Hidden Children by Reshma K. Barshikar, that I honestly don’t know how to rate this book. The book for young adults is immersive and irritating, fascinating and facile, and absorbing and boring, all at the same time. Which means my last question to myself when I finished the book — would I read a sequel if there was one — is crucial. The fate of this review hangs on my answer.

The Hidden Children, which has a most stunning cover (kudos to designer Junaid Khan), is a fantasy novel set in the real world of contemporary Mumbai. Shui, the heroine, is a dyslexic teenager in a fancy IB school in Mahim, and has quite recently moved back to India from the US. She’s an outsider in more ways than one — her dyslexia makes her the butt of bullies, her otherwise-ordinariness means the school’s most popular people want nothing to do with her, and she’s a newbie surrounded by people who’ve known each other since they were in diapers. But Shui is firm friends with Jai, who hasn’t been able to afford much since his father left his family, and Nallini, who’s probably richer than the rest of the school combined, but prefers to avoid the popular girls.

All is well with Shui — or as well as life can be for a teenager — when a new girl joins the school. This is Anya. The motherless girl has just moved from Scotland to Mumbai with her father, and she’s so confident in her own skin that she doesn’t care when the popular girls first try to be her friends, and then, when rejected, begin to bully her.

Shui is inexplicably curious about Anya, and when she spots the Scottish girl talking with butterflies, she ignores Nallini’s obvious, though equally inexplicable, dislike of the new girl, and befriends her. And what a world Anya introduces Shui to, a whole wide world of magic.

Shui, it turns out, is one of the hidden children. These are children from families that held on to the extra-human powers that all human beings had when life began, but who preferred, for safety’s sake, to stop teaching their children the magic they were born to when superstitious people began burning witches at the stake and hanging warlocks.

Since magic needs to be learned, and then to be practised, Shui’s powers are invisible even to herself, aside from a few incidents that took place when she was very small. But Anya believes Shui’s powers could be very strong if she learned magic, and Anya needs Shui’s help. Anya’s mother, Islode, a very powerful witch, was murdered. The murderer took away Isolde’s grimoire — the journal of her thoughts, insights, and spells — and brought it to Mumbai, where it is likely stored in a Bile Rath, which is a library, study hall, and administration centre for people with powers. Without the grimoire, Anya cannot bring her mother back to life, she says, and Shui’s powers, however nascent, are vital.

And so Shui, fascinated to learn that she can be more than herself, finds herself in a whole different world, even as she goes to school, plays basketball, and wanders around Mumbai. But this is a dangerous world, one filled with darkness, lies and greedy ambition. This is a world that has consequences for every action, where things are not as they seem, where unexpected people could be powerful, and family members evil.

The Hidden Children has a brilliant premise as you can see, so why, you must be wondering, do I have mixed feelings about it? Brace yourself. I’m going to tell you.

There were certain things in the book that annoyed my inner sub-editor, such as the constant use of “Am” instead of “I am” or “I’m” as in “Am sorry” and “Am joking”, and the fact that the author, a Mumbaikar herself according to the short bio on the back cover, makes glaring errors of local knowledge – everyone knows, for instance, that autorickshaws do not ply in the city, only in the suburbs, but the book has all these autorickshaws travelling from Mahim to Marine Drive. These are things I would always make a fuss about, but I’d classify them as minor if the writing actually lived up to its story.

But it often tumbles into messes. There are inconsistencies in the story-telling and world-building that seem to indicate that the author either lacked imagination or held herself back for unknown reasons. There are authorial cheats to escape plotting errors. And the pace is so slow that I was bored even at the climax, the most exciting part of the whole book.

Then again, the book does not take itself too seriously. The high priestess of Bile Rath, for instance, eats chips when faced with pressing problems. There is a sense of humour beyond the snarkiness of teenagers, and enough of a creepy atmosphere to make old me actually a bit frightened myself. And there is something very charming about Shui and her friends. They are very real teenagers, such as you would know. So in short, the book has potential.

Now to answer the question I asked at the beginning of this review — would I read the sequel if there were any? I’d say a pretty loud “yes”. Though hopefully, the author will have got a grip on her story by then.