Of belief and Biennales

Sangeeta will be carrying just one sculpture to Florence. 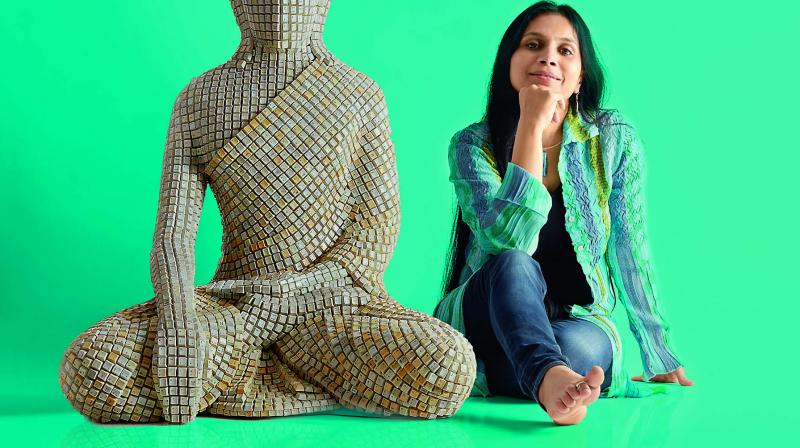 For Bengaluru-based artist Sangeeta Abhay, who has made it her mission in life to bring out the beauty of Lord Buddha, it’s been an exhilarating couple of years. From showing her first piece in a solo show to being featured on BBC’s Civilisations, she is now getting set to be a part of the Florence Biennale 2019 that will start on October 17. We got her to speak candidly about art, science and spirituality and how they are all intertwined in her work.

The Biennale has been held every two years since 1997. This year, will be paying homage to legendary artist Leonardo da Vinci. Talking about how this great mind has inspired her, Sangeeta shares, “He was a natural genius. To say that he was just an artist and a scientist would be wrong. He was an inventor, architect, musician and much more.” As an artist, Sangeeta loves exploring new media with each of her creations. For the Biennale, she says, “I am trying to create a fusion of science and art as I thought that would be a true salute to Leonardo and the event.” Science and art are two very different ways of understanding the world around us. But, in fact, these two are closely related. Is it important to have scientific knowledge to create great work? “Science and art have co-existed from the prehistoric period and that’s how Stonehenge in the UK, the Pyramids of Giza in Egypt or the Ajanta Caves in India were created. Anish Kapoor’s Cloud or Anthony Howe’s kinetic sculptures are the best examples of the fusion of science and art today. So, an artist has to be aware of digital, multimedia, electronics, physics, materials and luminosity to create contemporary art,” asserts the artist, who also  declares her love for the simplicity of Mark Rothko’s abstract expressionist style.

Sangeeta will be carrying just one sculpture to Florence. She shares, “This is a very prestigious art biennale internationally and I am eagerly looking forward to interacting with co-artists. I think that will be the experience of a lifetime.” Through the course of her stint with BBC’s Civilisations, Sangeeta met a whole range of people from historians to artists, architects, etc. How has meeting these people changed the way she views art? “I got a chance to interact with the legendary DOP John Perry, who has filmed David Beckham. I met Yoko Ono and His Holiness, the Dalai Lama. Being a part of this team changes one’s perspective about life. Unfortunately, the series is being telecast only in the US and UK. I’m hoping India gets to see it soon,” shares Sangeeta, who has come a long way from graduating from the Government School of Art in Aurangabad.

Lord Buddha has played a huge part in shaping Sangeeta’s career. Through her art, she has tried to bring out the work and teachings of Gautham Buddha. Some of the words that can be used to describe Buddha would be calm, serene and warm. But having lived in Bengaluru, Sangeeta confides that this city too has inspired her. She says, “Bengaluru is a metro but still has the heart of a small town. Therefore, I never miss the serenity of my home town — Buldhana.” Having spent her childhood in the foothills of the Ajanta Caves, Sangeeta mentions that she never misses a chance to re-visit them. On what drew her to the teaching of Lord Buddha she shares, “The pictorial Jataka stories must have inspired me towards Buddha’s teachings in my childhood. He showed the way forward through the exercise of love, compassion and non-violence to mankind. And we still need to be reminded periodically about this path. And I am trying to contribute towards it in my own way,” she says. Sangeeta’s first tryst with art happened while she was working in an ad agency. “I painted my first thoughts on the Buddha on canvas and people really liked what I had done. They suggested that I approach a gallery for a showing. Surprisingly, armed with one painting, I walked into the gallery and got my first show — In Search of the Buddha,” reminisces this artist. Sangeeta shares that it was through Buddha that she was able to achieve so much. “I could meet director Shyam Benegal and my mentor Dr Pushpa David due to him. He brought the legendary Gulzar-sahib and me together and the Florence Biennale is happening only because of him,” she fervently believes.