Such a ‘Nobel’ gentleman

Dr Colin Gonsalves, the winner of this year’s prestigious Alternative Nobel, talks about what the award means to him and his journey so far. 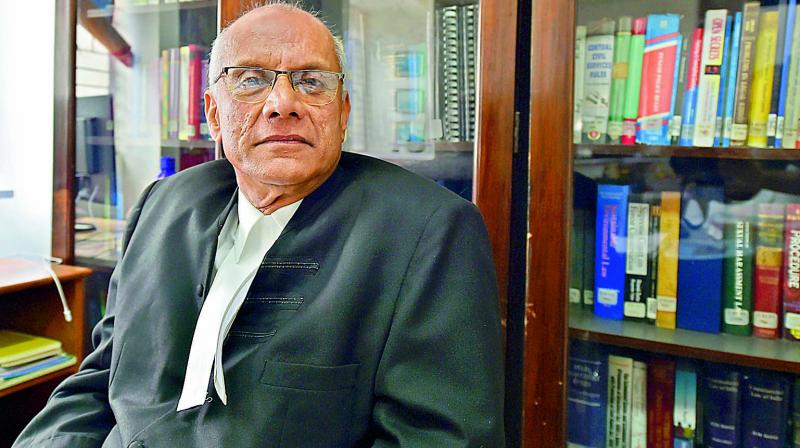 He has just been awarded the 2017 Right to Livelihood Award. But Dr Colin Gonsalves, a Supreme Court senior advocate and the  founder of the Human Rights Law Network, is characteristically humble about his achievement. “Well, I’m not the first Indian to get this award. There were Indians before me like Ruth Manorama, Medha Patkar and others who were given this award, but it’s been 10 years since an Indian got this award, and in that sense, it’s been a long break for Indians. I see the award as recognition of the work done by NGOs and civil society organisations in this country, and I see the timing of the award as important because India is going through a very dark period where human rights are being restricted at an unprecedented scale. So we are happy, not just individually but for the whole community within which we work to see that the democratic rights struggle we are engaging in has achieved some recognition in the world,” he responds.

Let’s backtrack a little. Almost, seven years ago, Dr Gonsalves was presented with an honorary doctorate by Joshua Castellino, dean of the Law School at Middlesex University in London. Castelino paid this 65-year-old Indian gentleman the ultimate tribute by calling him, “the modern conscience of India.”

Do such honorary recognitions help him in his constant fight for justice in human rights cases? “They help enormously because there are very few NGOs and organisations that get the recognition they deserve. India is a huge country with thousands of very good fighters for democratic rights but because of the conditions under which they live, they don’t have financial recourses to travel abroad, so they are known very little outside India. Even though they do such fantastic work in India, even though they put their lives on the line for democratic rights struggles, they do not get the recognition they deserve. Several Right to Information activists and journalists have been jailed or killed. A friend of ours, Gauri Lankesh was assassinated. There are many people who could get these awards, some more active than I am, much better than I am. So I think these recognitions open up India and through me, I’m able to tell the world of the marvellous work being done which needs to be supported,” adds Dr Gonsalves.

The prestigious award (also known as the Alternative Nobel) given by the Stockholm-based Foundation has identified Dr Gonsalves for “his tireless and innovative use of public interest litigation over three decades to secure fundamental human rights for India’s most marginalised and vulnerable citizens.”

How does he plan to put to use the cash award of `22.42 crores that he shares with two other laureates, Azeri journalist Khadija Ismayilova and Ethiopian lawyer Yetnebersh Nigussie? “This may sound funny but I don’t know what the award amount is and I suspect it comes nowhere near the amount you’ve mentioned, but I’ve already declared that we’re going to use part of the money to set up a trust for the legal defense of journalists, RTI activists, tribal activists and so on. This trust will be independently managed and we’ll have prominent journalists as a part of it. The second thing has been our dream for a very, very long time — to set up a Centre for Constitutional Rights. This centre would train young lawyers, paralegals and social activists in public interest litigation. Although this will be centered in Delhi, it will reach out to all countries that have Constitutions — many countries of Africa, South America, and Asia. And it will try and  take the technique of PILS — which is class action litigation — to lawyers and activists in these countries. The money might not be enough to (fully) set up the centres so we’ll use it as seed money, and others can also contribute in their set up. These are the twin purposes we’ll use the award money for,” he states.

For those who are not familiar with his background,  Dr Gonsalves graduated from IIT in civil engineering in 1975 and three years later opted to study law at night school. He did this after experiencing a politically volatile environment at IIT, Bombay.

Was there any specific incident that influenced this decision? Also, was it common to change tracks back then?

“It was not common or easy to change tracks after five years of engineering. But for me, it was easier because that period was very politically volatile — the Emergency, Jayaprakash Narayan movement, the railway strike and later the textile strike. So unlike many young people today, I grew up, fortunately, in an atmosphere of debate, of political repression, of young people going off to villages to join the Naxalite movement. I attended a study circle in IIT called the Marxist Study Circle Group and my mind gravitated towards social sciences in my third year, which meant that by the time I was finished with my five-year course, I was very happy to move away from engineering. I was then offered a job for `500 with Dr Datta Samant, who was my guru, and this was my salary for five years with an IIT degree, and yet, these were the happiest years of my life. I don’t think I was underpaid at all. This is why I think you should have exciting formative years where your learning curve is very steep,” he elaborates.

We steer the conversation towards his personal life and ask him if he has other passions besides fighting for Human Rights? “Outside the law, I am a very dull and boring character, I suppose. I’m very consumed by the law and human rights, by my work and organisation building. I’ve also been fortunate to have had a chance to meet with the most wonderful fighters and inspiring people — not just great leaders, but ordinary people as well. Today, of course, my passion apart from my work is my family — and trekking and walking in the mountains! I love the solitude of the mountains. But my real joy and passion is that I have met hundreds of inspiring people,” he confesses.