Leslie is not only a top athlete, but also an accomplished business woman who has turned her passion for the sport into a thriving career. 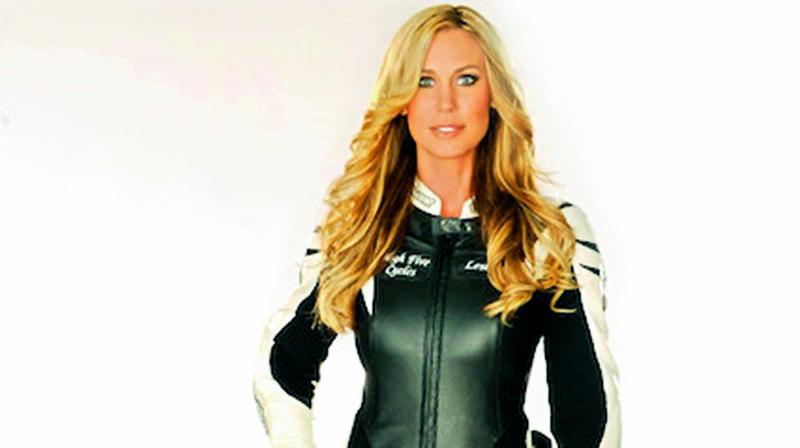 Leslie Porterfield is the world’s fastest woman on a motorcycle (hitting 246 mph!). The gorgeous rider tours the world as public speaker and advocate for other woman riders. We met up with the racer at the India Bike Week in Goa.

Leslie Porterfield doesn’t like to be told what she cannot do. Including riding a motorcycle. So when she bought one at age 16 and everybody she knew said she’d never be able to get it running, Leslie not just rode it but also raced it. “I wasn’t brought up on motorcycles; in fact my family were not into bikes. It was initially as an inexpensive mode of transportation. I was a very scrawny kid. But over the years, I got involved in different types of road racing. Then, when The World’s Fastest Indian came out (biographical sports film based on speed bike racer Burt Munro and his highly modified Indian Scout motorcycle) in 2005, I just knew it was time to go over 200 mph,” says Leslie.

And that’s exactly what she did. In 2008, Leslie burned Utah’s Bonneville Salt Flats and broke the Guinness World Record previously held for over 30 years by motocross rider and stunt woman, Marcia Holley in 1978. She managed the top speed of 246 mph. Faster than the bullet trains in Japan! What does a motorcycle do at that speed? “I’m running a motorcycle that has over 500 horsepower and weighs about 400 pounds, so I get a lot of rear-wheel spin. Traction is a constant issue. There are times that my rear wheel has gone up to 60 mph faster than my front wheel, so burning off tyres and blistering tyres is something that I have to be very careful about in managing throttle. After a certain point, with that rear wheel not getting traction, I’ll end up getting out of shape pretty quickly,” she explains.

Although her record breaking run was over in a very short space of time (seconds), it took years to get to that point. There were hundreds of hours of practice, selecting, trying and fine-tuning bikes to get to the right one, learning how to ride on salt, going at speeds not previously experienced and learning how to position and adjusting on the bike, as velocity increases.

Over the years, Leslie went on to own and ride many mean machines and is frequently adding to her collection. Currently, she rides a Honda CBR1000. She also owns several classic bikes from the 60s. “I enjoy restoring old bikes. They aren’t very fast but they are so much fun. My favourite is a 68 Yamaha YCS1. An adventure bike is probably next.” Of course, she still has her Hayabusa turbo charged ‘rocket’ machine, the bike that Leslie achieved the world record on in 2008. It holds ‘pride of place’ and is displayed at her Inkling tattoo studio in Dallas, Texas.

Living on the edge
Leslie’s record-breaking attempt also landed her in a near fatal accident. In 2007, when she was racing at the same Salt Flats in Utah at the speed of 227 mph, the motorcycle tumbled for over 50 feet. Leslie not just broke seven ribs, punctured a lung, and had a concussion; she also had to be airlifted to the hospital. “That was definitely my worst crash. I was fortunate to recover quickly. I still have some aches from the broken ribs but I consider myself lucky,” says the girl, who the following year, rebuilt the motorcycle, recovered, and achieved her first record aboard the same motorcycle she had the accident on. “When I came back to the event and set my first record, it made me a better rider. I had to tune out everything else and not think of the possibility of wrecking.”

Getting down and dirty
Leslie loves working on her bikes so that she knows them inside out. It’s important when your safety depends on the machine that you are riding. “It’s not just about the safety element, tinkering with bikes is so pleasurable. I never get bored of it. There is something so fulfilling in re-building a motorbike, especially when they start off looking like they have just come out of an abandoned old barn after sitting there for many years, and then bringing them back to their former glory, the whole process is so satisfying. Yes, the grease under the nails can be a bit of a pain, but it’s always worth it.”

Racing with the boys
Racing was always a male domain and it can be quite intimidating to see a petit blonde breaking records. How do men react when they meet the fastest woman on wheels? “It can be quite amusing. Some guys are genuinely happy for me to have achieved what I have, others not so. However the ‘not so’s’ are very few and far between. Slowly and surely women are getting recognised for their achievements, both on and off the race/speed scene.”

Staying in top gear
Motorsports racing is both a physical and mental sport and Leslie prepares by maintaining a mostly vegetarian diet and focusing on upper body strength with weights. Yoga is her favourite routine to stay flexible. Processed foods and sweets are a complete no-no. “I keep in shape by scuba diving, horse riding, walking my dogs and exercising.” But the best exercise of them all is chasing after her two five-year-olds!

Leslie is not only a top athlete, but also an accomplished business woman who has turned her passion for the sport into a thriving career. With strong business acumen and a degree in accounting, she has built one of the most successful motorcycle dealerships in Texas.

Next up is to replace the title of “The Fastest Woman in the World” with “The Fastest Person in the World.” And to do that, she has to go over 254 mph in the modified class on her Sir Speedy Honda, a feat which she aims to accomplish soon.