The words were etched in Anmol’s heart, but she didn’t flinch, she didn’t cry — the “burnt face” was her reality. 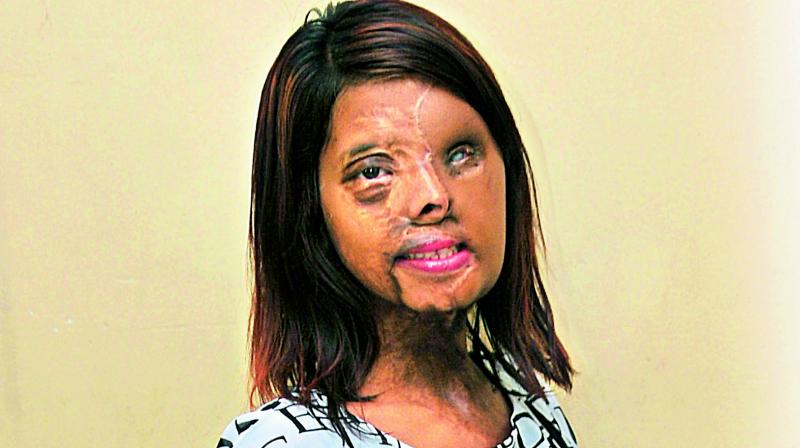 Trolled and discriminated against, Anmol Rodriguez decided to let her disfigured persona be the face of joy, acceptance and positivity with her various social media accounts, as an influencer.

It was around a year ago that Anmol Rodriguez left her full-time job in a multinational company following discrimination from her employers. “We can’t come to work to see a burnt, disfigured face every day. This needs to change,” they allegedly said to her.

The words were etched in Anmol’s heart, but she didn’t flinch, she didn’t cry — the “burnt face” was her reality.

“When I first got to know that my workplace was discussing such things, I was hurt. Not by their choice of words or the blatant discrimination but how something like this affected them at such a deep level. It was hurtful,” she recalls. Anmol didn’t stay there long. Within a week’s time, she put down her papers and walked away, feeling lighter than ever.

When Anmol was just two-months-old, her parents got into a fight, following which her father threw acid on her mother. Unfortunately, Anmol happened to be perched on her mum’s lap at the very moment. And so, she fell prey to the acid attack as well. “I don’t remember much of it. I was later told that my mother succumbed to the injuries due to the attack, and my father was arrested for the same. And me, I was sent to an orphanage,” she recalls.

If your heart sank a little, let it. But don’t let it wallow in pity. Today, Anmol is carrying the torch for self-love and empathy. Through her Instagram account, the young girl shares pictures and videos of her in her most natural habitat, urging people to embrace themselves the way they are — the way life made them.

One of Anmol’s many dreams is to become an actor. For this, she joined the lip-syncing app Musical.ly, and she gained popularity almost instantly.

“I was seeing several people upload videos of lip-syncing to short clips from movies and songs. And I thought of giving it a try,” she recalls.

With a following of 77,000, Anmol is more than just a muser (a user of the Musical.ly), she is a social media influencer as well. Anmol also models for several small-time Instagram stores through her profile.

One look at her social media profile and it is evident that Anmol’s followers adore her. Filled with positive comments and hundreds of likes, Anmol’s social media is a garden of positivity. But as someone who creates content online, she has seen her fair share of trolling and negative comments. And it won’t be a surprise if a majority of these comments are about her face and body.

“Being a woman online is not easy. And I think trolls find it easiest to attack my face and my body. After all, it is out there across all my social media,” she shrugs. Sharing her most recent encounter with a troll, Anmol says some words are more hurtful than others. “It was just a couple of days ago that a woman sent a direct message on Instagram. I like to be in touch with my followers, so I opened my inbox. But it was horrible,” she says. Anmol recalls not just being called “ugly, burnt and disfigured,” but also body shamed. “She even called me a sl*t. What had I ever done to her?” she questions.

At the same time, Anmol believes she is lucky she never has to deal with them herself. “My followers take care of any negative comments on my posts. They are always there to take a troll down. One time, they even reported an account that was harassing me for a long time,” she says.

Anmol also functions as a co-founder of an NGO called Acid Survivors Saahas Foundation for others who’ve been scarred. “The main objective of the organisation is offer acid attack survivors a chance to rebuild their life — one step at a time,” she says.

With a positive attitude and a bright smile, Anmol likes to call herself the “happiest girl on Earth.”