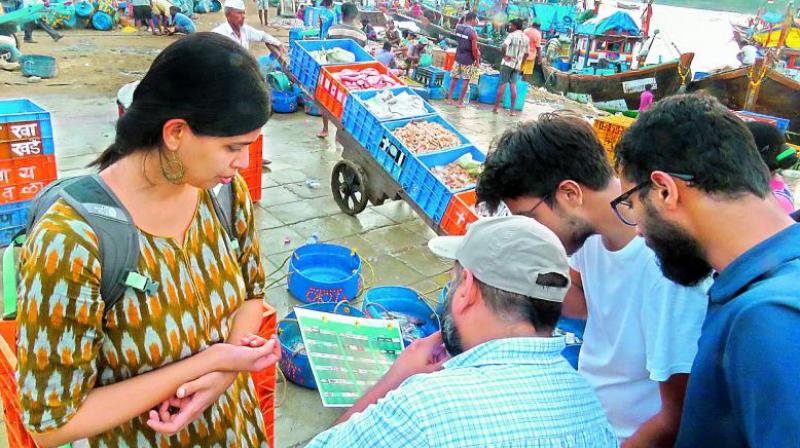 The idea, according to Divya, is to encourage people to eat a wide range of fish throughout the year, avoiding the ones that are breeding.

Divya Karnad’s website lists seldom-heard recipes such as ‘minced electric ray fry’ and ‘Karavadu’, a dish of salted, dried sardines. The idea, according to Divya, is to encourage people to eat a wide range of fish throughout the year, avoiding the ones that are breeding. The oceanic-blue website also acts as a handy guide to discovering seafood that’s ‘in season’ and also lists the ways to choose fishes caught by the best fishing practices. This InSeason Fish project is also the reason for her winning the prestigious Future of Nature Award 2019, which celebrates exceptional achievements in the field of wild animal and plant species conservation. Through the project, Divya and her team are working towards conserving endangered marine species, especially sharks, by promoting sustainable fishing and seafood consumption patterns.

The 34-year-old reveals how her life along the coast influenced her career choice. Born and brought up in Chennai, Divya always wanted to pursue a career related to animals. “Initially, I thought of becoming a vet, but later on, I gravitated towards working with wildlife,” says Divya. And her earliest interaction took place in college when she signed up with a volunteer group called Student Sea Turtle Conservation Network that was working towards protecting Olive Ridley Sea Turtles. This interaction formed the basis of her Master’s thesis and brought her into close contact with Olive Ridley Turtles in Tamil Nadu and Odisha. It was during gruelling fieldwork sessions that Divya chanced upon a crucial realisation that would eventually inspire her to set up InSeason Fish. “When working with Olive Ridley Turtles, I also got to know about the problems faced by fishermen, because I worked closely with them and had even hired people from the fishing community to help me with my research. It was then that I realised
that during the mating and nesting periods of Olive Ridley Turtles, the sea gets populated with either mating turtles or their vulnerable offspring. Hence, fishermen ended up catching a lot of turtles in their nets, and if brought to the shore, they were penalised as Olive Ridley Turtles are protected under Schedule 1 of the Wildlife Protection Act,” narrates Divya. This made fishermen refrain from fishing for about four to five months, which adversely impacted their already meagre earnings. “For a person interested in conserving turtles, this was a difficult conversation and it made me think about sustainable fishing. Also, fishing seemed to be the larger problem that was plaguing the seas, because over-fishing was impacting several marine species. So I realised that I could kill two birds with one stone if I focussed on sustainable fishing. And this is what I ended up doing my PhD on,” says the Rutgers University alumnus. InSeason Fish draws heavily from her PhD work findings, which informed her about conve
rsations surrounding sustainable fishing practices, but also led to the realisation that Indian fishermen were finding it hard to practice sustainable methods in the country’s tropical seas.

“There’s a lot of diversity in India’s water bodies, and fishermen practicing sustainable fishing end up catching varieties of seasonal fish. However, the market is not receptive to this kind of catch as there is a high demand for only certain species. I started InSeason Fish to tackle this problem in the supply chain and talk about how, if we wanted to save our seas, not just fishermen, but even consumers have to think about sustainability and act on it,” says the marine ecologist. The project strives to bring about this mindset change by encouraging people to “Eat Seasonal, eat diverse and support small-scale fishermen who are interested in sustainability,” says Divya.

To achieve these goals, Divya and her team work with local housewives and restaurant chefs to create a virtual recipe book of local recipes for seasonal fish. They also conduct ‘Fishsplorations’ in multiple cities, during which consumers are encouraged to explore fish markets or fish landing sites and are trained to find out whether the fish they are buying has been sustainably sourced or not. “Wherever possible, we try to introduce them directly to the fishermen who are fishing sustainably, because the goal is to bridge the gap between fishermen and consumers,” Divya informs us. The InSeason Fish team also conduct workshops with chefs to familiarise them with indigenous, seasonal fish species and the local ingredients they can be paired with. Here again, the goal is to connect restaurant owners and chefs with people from the sustainable fishing community. Additionally, InSeason Fish has conducted sustainable seafood pop-up dinners, like the one in Mumbai, called the ‘Danda Food Project’ (After Khar Danda mar
ket) and have also helped restaurants create seasonal seafood menus and source fish from small-scale fishermen.

Despite these efforts, Divya believes that a lot more needs to be done if we want to save our seas, especially in India. Underscoring how Indian fisheries are in a grave state, the marine ecologist says, “Our fisheries reached their peak of fish catch in the 1990s. Ever since then, they’ve been on a decline. As more people turn towards healthy food choices, there’s going to be even more pressure on the marine ecosystem to provide food. The sea is the best place to source organisms that provide relatively cheap protein and can be enjoyed by both high and low-income groups. So the thought that we are losing this crucial food reserve at such a fast rate is extremely scary.”

Apart from the purpose of sustenance, Divya highlights how preserving marine organisms are crucial to saving the entire planet. “All these organisms that are part of the sea are maintaining ecosystems. If we remove these organisms, we don’t know to what extent it will speed up the effects of global warming. To think that we can pull out certain parts of the puzzle and believe that the rest of the puzzle will be okay is a bit short-sighted,” she says and adds that she is determined to use the recognition gained by the Award to further her conservation efforts by implementing more field-based programs, and reminding people that there will always be ‘other fish in the sea’.