Tracing her journey, Jangid recalls that she was always aware that it wasn’t her age to get married but to learn. 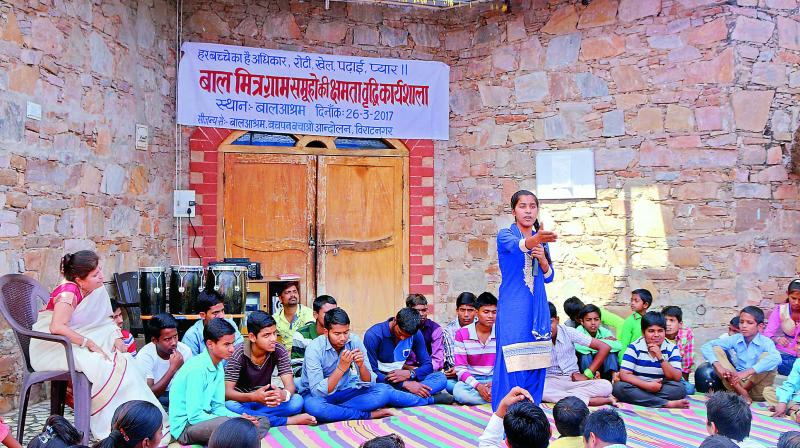 Seventeen-year-old Payal Jangid is the first Indian to be awarded with the Changemaker award by Bill and Melinda Gates Foundation for her work towards abolition of child marriage.

In 2011, when Payal Jangid was being forced to marry, she was only nine years old. At a time when conversations about human rights are at an all-time high, bal vivah (Child Marriage) – a violation of child rights that has been shrouded under the garb of old-age tradition – is still an active practice. And Jangid would have been one among many minors who’s right to health, education, and opportunity would have been violated had she not started resisting. At that tender age, Jangid not only managed to escape from the clutches of a forced wedlock but also swore to embolden a campaign against child marriage in her village Hinsla and its adjoining areas in Rajasthan.

Almost a decade later, Jangid, now 17, stands tall, literally and metaphorically, especially after becoming the first-ever Indian to win the Changemaker Award by the Bill and Melinda Gates Foundation at the Goalkeepers Global Awards ceremony held in New York.  “Having escaped from child marriage, I swore to make the society free of this social evil. This recognition has further encouraged me to continue my journey towards ensuring that children around the world are free from exploitation,” says Payal, who is elated after receiving the prestigious award.

Resolute since the beginning
Tracing her journey, Jangid recalls that she was always aware that it wasn’t her age to get married but to learn. At that time, despite many fights, Jangid was unable to convince her parents. But when one day she came across some activists from Bal Ashram by Kailash Satyarthi, campaigning in her school on Child’s Rights, the awardee saw a glint of hope. “I got the courage to protest and raise my voice against the decision of my family which eventually forced my parents to relent and call off the marriage,” she remembers.

After the plans of her marriage were foiled, Jangid decided to start her journey afresh and dedicated herself to helping other children. In fact, in 2013, she was even elected as the bal sarpanch (President) of bal panchayat (Children’s Council).“Preventing my marriage successfully was a big victory not only for me but also for all the children of my age. Since that day, I have committed myself to make my village and its surrounding areas free of social issues,” says the activist who is currently pursuing a Bachelor of Arts degree and is on her way to becoming a teacher so that she can impart quality education to children.

Education as a way forward
Even as a teenager, Jangid has an understanding of an individual’s rights and entitlements. As part of her activism, Jangid counsels many parents on the importance of formal education and explains the repercussions of child marriage on the child and society.

“When I get to know about any child marriage taking place in any nearby village, I reach out to the family and convince them to stop the crime with the help of community leaders. I also train a new set of children and youth volunteers in villages and apprise them about the positives of attending school and gaining education,” she explains and confirms that she and her team has been successful in not only stopping child marriages but also enrolling children in schools.

When asked if she ever felt unheard or ignored as a teenager, Jangid is quick to respond in negative. “We need to become role models for future generations so that they acknowledge our efforts and continue this fight with the same vigour. If you know what you are doing, then people take you seriously,” she believes.

Demand for holistic development
After closely working with communities, Jangid has learnt that to eradicate social malaises, it is imperative to ensure that every child not only has access to basic education but also to basic amenities. “Children should also be provided with healthcare facilities and extended equal protection by society and state,” she demands and opines that if people join hands, the desired change is bound to happen.

The road ahead
Taking the center stage in New York, Jangid shared her aim of fighting against all forms of exploitation of children around the world and ensure her vision of a world free of violence and exploitation is realised. “I shared my struggle with the global audience and apprised them about my journey from a small village to New York,” she shares and assures that she gets all the support from her family now as they too have joined her campaign. “My family and the entire village were thrilled. They are proud of the work that I do and they also encourage me to go forward with it,” says the young warrior in conclusion.